The University of Illinois at Chicago United Faculty successfully organized a union in 2012 but have not been able to reach an agreement with the administration on a first contract. The union is prioritizing higher wages, particularly for non-tenure track faculty, and a greater share of decision-making power in the university. They have called a two-day strike for the next two days. 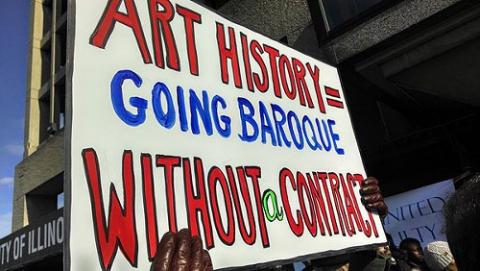 , Illinois Federation of Teachers
Members of the faculty union at the University of Illinois at Chicago are about to make good on their long-developing threat of a walkout.
They've called a ministrike.
After filing a strike notice earlier this month, University of Illinois at Chicago United Faculty (UICUF) has announced a two-day work stoppage for tomorrow and Wednesday (February 18 and 19). The union, which represents both tenured and non-tenure-track faculty, has been negotiating its first contract with the university for a year and a half, and says it hasn't seen progress on key issues.
Those issues—including higher wages, especially for the non-tenure-track faculty, and a greater share of decision-making power in university governance—were spelled out at an impassioned teach-in at Hull House last November. Union members voted to authorize a strike in December.
UICUF president and economics professor Joe Persky says the walkout is meant to "show them we're serious," while the two-day period was chosen in an attempt to minimize the impact on students. Since most classes meet either Monday, Wednesday, and Friday, or Tuesday and Thursday, "the idea was that each course will lose only one class," he says.
"We've got 70 lecturers making $30,000 a year," Persky notes. The union is asking, among other things, that those wages be raised to at least $45,000 annually. But, he says, "the offer they've made so far doesn't even come up to what's being paid [by the university] in Champaign-Urbana, where the cost of living is much less than it is here in Chicago."
"It's not an issue of money, because the administration is sitting on a pile of cash—this year something like $1.3 billion in unrestricted expendable reserves. They've been making profits the last four years of over $200 million a year."
"We didn't want to strike. We feel they've forced us. We're ready to negotiate. We'd like to resolve the issues to avoid something worse in the future."
The university, in a statement posted along with negotiation updates at its website, says that it "will continue to bargain in good faith, now with the help of a federal mediator, until a settlement is reached."
The next negotiating session is scheduled for Friday.
A rally is planned for 10 AM Tuesday on the Quad (750 S. Halsted). Union members and supporters will be picketing on the campus throughout both days. Strike headquarters will be located at Hull House.
Graduate students are covered by a different contract and will teach their regularly scheduled classes; the Medical, Pharmacy, and Dental schools are not affected by the walkout.