Comcast is bad; Comcast is worse; Today Comcast, tomorrow the world; Immigration coverage; US press freedom on the skids; PBS for sale 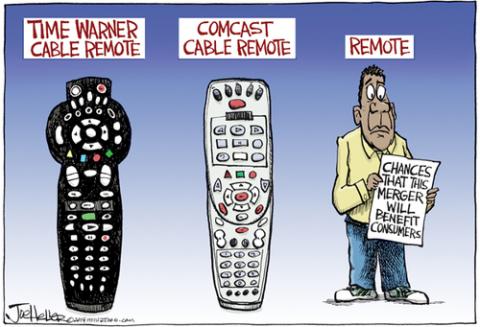 Face It, Comcast Doesn't Love You

Though the proposal unveiled by Comcast earlier this week to buy Time Warner Corporation for $45 billion might look sexy at first glance -- a closer look reveals the proposed merger's ugly side. As with the 2011 Comcast/NBC merger, the marriage of Comcast and Time Warner is not the love fest it appears to be. In fact, there's evidence that families currently forced by anti-competitive practices to rely on Comcast may face real threats if the deal is sealed.

Like with any relationship, it's important to get past the honeymoon phase, with all the flowers and candy, to find out what you're really dealing with before you tie the knot. So, as a Valentine's Day gift to you, I've got six common sense ways to help you evaluate the Comcast/Time Warner merger.

In agreeing to pay $45 billion for Time Warner Cable, Comcast hopes to create not only an enormous cable TV provider, but the largest broadband internet provider in the United States and a company that controls about half of all "triple play" services, which bundle cable TV and broadband alongside internet-based telephone connections.

And that only begins to describe the magnitude of the deal.

If approved by federal regulators, the merger would reverberate through myriad markets beyond the cable TV, commercial broadband, and telephone industries. The deal could impact satellite TV, television programmers like ESPN and Fox, online video providers like Netflix and YouTube, and the massive networks at the very heart of the internet.

But the issues go far beyond whether consumers have access to other types of services. Most importantly, this merger would give Comcast added leverage in its relationships with television channels, content providers such as Netflix, and the companies that operate the infrastructure underpinning the internet. Ultimately, we're inching toward a world in which the core of the internet rests in the hands of just a few large companies


Comcast's Web of Lobbying and Philanthropy

Only a few hours had passed after the $45 billion merger between Comcast and Time Warner Cable was announced last week when an early voice emerged endorsing the giant deal.

"Win-win situation for American businesses," said the statement from the United States Hispanic Chamber of Commerce. But what the Hispanic Chamber of Commerce did not mention in its statement praising the transaction was that it had collected at least $320,000 over the last five years from Comcast's charitable foundation.  The corporation has a history of supporting nonprofit groups and charities, particularly groups that serve African-Americans, Latinos and Asians, was motivated by a desire to build political allies.

Leaders of several minority groups said Comcast did not simply donate money to their groups. It also funds programs to try to improve economic opportunities for minorities, they said.  The [earlier Comcast] merger with NBC offers a case study of how central a role this network of nonprofit groups can play when the company is seeking regulatory actions by the government, particularly the F.C.C., which weighs a commitment to local communities and diversity when making its decision.

[This article includes "A Network of Support for Comcast" chart of donations to minority organizations.] 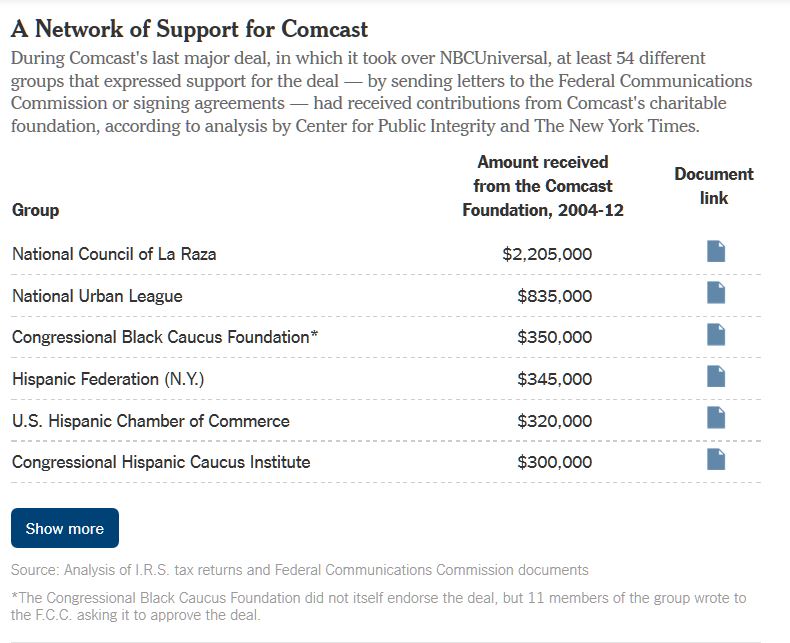 How the Media Covers Immigration Issues

When it comes to covering the sensitive subject of immigration, both mainstream media and ethnic publications face some challenges.  At a panel discussion sponsored jointly by the New York Immigration Coalition and the Center for Community and Ethnic Media at the CUNY Graduate School of Journalism on February 13, a panel of three journalists who report daily on immigrant issues shared their observations, trials and tribulations covering immigrant stories.

At the heart of every good story on immigration, the panelists agreed, is a story of a real person whose life has been affected by immigration policy. This is one area where advocacy organizations can serve as a key link between the media and immigrants with stories to tell.  The panelists wrapped up by talking about how immigrant advocacy groups might land more positive immigration-related stories in the press. The answer? Pitch positive stories.

In one of the largest drops in the modern era, the United States has plunged thirteen places in the World Press Freedom Index, placing it behind former Soviet states and other countries not typically known for press freedoms.  The massive drop is attributable mostly to the Obama Administration's effort to crack down on whistleblowers. Obama's Justice Department has filed suit against more whistleblowers than any other presidential administration in history.

Forty-sixth places it behind the former Soviet republics of Lithuania and Latvia and the satellite states of Romania, Poland and Czechoslovakia (both the Czech Republic and Slovakia). It also puts it behind Ghana, South Africa and El Salvador. The U.S. hasn't fared well in the rankings in the past - last year, the group put the U.S. at  32nd. Traditionally, this put it behind myriad European countries (Finland, Norway, Germany and Switzerland). Canada placed 18th. There are 180 countries on the list.

How PBS Sold its Soul to a Billionaire Donor

A few days ago the Public Broadcasting Service announced it was returning a $3.5-million grant it had received from a Texas billionaire to fund a series of documentaries about the "pension peril" -- the costs to cities and states of their public employee retirement obligations. PBS took the action after a report in the tech news website PandoDaily exposed the conflict of interest underlying the original donation.

The $3.5-million grant had been made by John D. Arnold, a billionaire natural gas trader from Houston. The series of news segments on the PBS NewsHour it funded, "Pension Peril," included an episode on California public pensions. That segment mentioned a ballot initiative being pushed in the state to roll back public employee pensions -- an initiative campaign being partially funded by, yes, John D. Arnold (through something called the Action Now Initiative).

As for the "Pension Peril" series, it's typical of reporting that treats public employee benefits as though they're the chief cause of municipal fiscal problems.  The "Pension Peril" installment on California paints municipal employee benefits as a driver of the bankruptcy of the city of Vallejo; you have to listen very carefully for the fleeting references to the role of the loss of a shipyard -- a major employer in town -- and the overall economic downturn.