Staining the Blood of His Master: Ted Nugent, Thomas Jefferson and Racial Intolerance

By any measure, Nugent's statement about Obama as a "subhuman mongrel" comes directly from what Jefferson had written about black people in America in his book, Notes on the State of Virginia (1785). 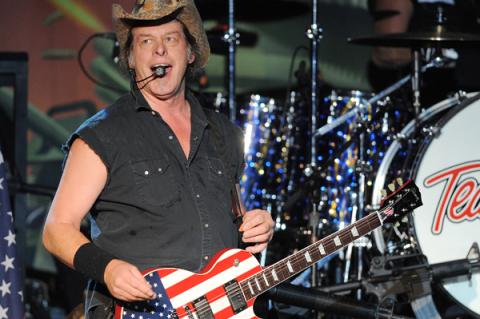 When news appeared last week that Ted Nugent, while campaigning with Texas Republican gubernatorial hopeful and state Attorney General Greg Abbott, had, as quoted in Guns.com, in January called President Barack Obama a "subhuman mongrel," the reaction has been condemnatory.  What many may not know is that Nugent's insensitive remarks come directly from the racial ideology of his most idolized Founding Father.

In his December 21, 2010 piece in The Washington Times, "Extremely American",  Nugent praises the "extremism" of the "Founding Fathers," and then goes on to claim ideological kinship with Thomas Jefferson, one of the Founding Fathers he lionizes.

Although Nugent references Jefferson's "extremism" with regards to the excesses of the Federal GovernTement, his authorship of the Declaration of Independence, etc., what he (Nugent) fails to include in that repertoire is Jefferson's views about black people as "subhuman" and "mongrel," notably the concepts Nugent collapses into a single phrase in his description of President Obama.

By any measure, Nugent's statement about Obama as a "subhuman mongrel" comes directly from what Jefferson had written about black people in America in his book, Notes on the State of Virginia (1785).

That blacks were "subhuman" to Jefferson is evident in his following statement about animals in Virginia: "To this catalogue of our indigenous animals, I will add a short account of an anomaly of nature, taking place sometimes in the race of negroes brought from Africa." Although he was "explaining" the presence of albinism among "negroes", it is Jefferson's inclusions of blacks in his "catalogue" of animals that is reflective of his pseudo-racist science.

Jefferson contemplated deeply on the presence of black people in America as citizens. He demonstrated his fears and anxieties as to whether to "retain and incorporate blacks into the state." He argued that blacks should not be incorporated as citizens because of deep "rooted prejudices entertained by the whites" "recollections by the blacks, of the injuries they have sustained" and "the real distinction which nature has made," which to him meant that blacks were inherently inferior to whites in both body and mind.

He pondered still, valorizing his racist pseudo-science: "To these objections, which are political, may be added others, which are physical and moral. The first difference which strikes us is that of colour. Whether the black of the negro resides in the reticular membrane between the skin and the scarfskin, or on the scarf-skin itself; whether it proceeds from the colour of the blood, the colour of the bile, or from that of some other secretion, the difference is fixed in nature." He concluded that blacks were of a "different species," and were closer to animals than to humans. Thus, it is their "animal", sub-human, qualities that make blacks different from whites.  Like animals, blacks have no reason, no reflection, no imagination, so sense of beauty, and therefore outside what he called "human nature."

The "mongrel" part in Nugent's statement draws from Jefferson's views about black people when emancipated from slavery. Fearing what might happen to an America without slavery and the presence of blacks as citizens, Jefferson asked: "'What further is to be done with them?'" Citing Roman slavery where slaves were integrated into Roman society after their freedom, Jefferson advocated against black integration in America. He reflected thus: "Among the Romans emancipation required but one effort. The slave, when made free, might mix with, without staining the blood of his master. But with us a second is necessary, unknown to history. When freed, he is to be removed beyond the reach of mixture."

Jefferson envisioned a future America, free from slavery, as one that is wholly white and must not allow any iota of mixture that would lead to the making of "mongrels."  He, therefore, proposed that in order to preserve white purity in America, all ex-slaves must be sent back to Africa, thus guaranteeing that they would be "beyond the reach of mixture," and thereby preventing "staining the blood of his master."

Jefferson's proposals against miscegenation reflected his fear of sexual intercourse between black men and white women but, obviously, not between white men and black women as that between him and Sally Hemings demonstrated. Jefferson had an affair with his attractive mulatto slave Hemings, whom he kept as a mistress for decades and had several children with.  It was only with indisputable DNA in 1998 that it was irrefutably affirmed that Jefferson indeed had fathered Hemings' children.  Thus, while Jefferson was articulating his public views against miscegenation, he was engaged in it in his household; while he was berating racial mixing, he was producing racially mixed children; while he was frightened by blackness, he kept a black woman as his bedmate.

Jefferson's "extremism" is loaded with inconsistencies and hypocrisies.  His libertarianism masked his intolerance and racial insensitivity; his advocacy of rights and civil liberties did not extend to black people; his declaration of liberty, equality and justice contradicted his ownership of slaves. That he advocated the expulsion of black people from America because of racial fear captured his deep racial biases and racism.

The extreme racist diatribe that Nugent espouses and directs against Obama has a trajectory that goes back to his famous Founding Father, Thomas Jefferson. That is, once we understand Nugent's phrase in their Jeffersonian context, we should see it as an egregious racial insult not only against President Obama, but also against all black and racially mixed people in America. Nugent's admiration of Jefferson's "extremism" includes racial intolerance and the fear of a multiracial America.