After 9/11 the agency was given free rein to break the rules but when allowed to play dirty abroad, it's difficult to stop at home

March 14, 2014 Gary Younge The Guardian
Printer friendly
The CIA Has Brought Darkness to America by Fighting in the Shadows Published March 14, 2014 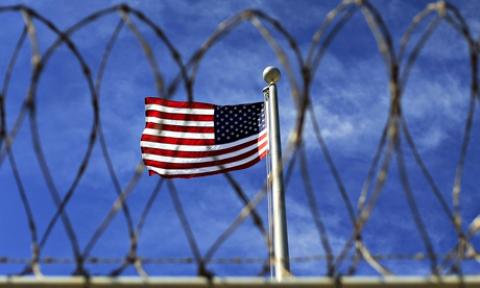 The US flag flying at Guantánamo Bay. 'As covert operations were shielded from oversight, so human rights violations became not just ­inevitable but routine.' ,Bob Strong/Reuters

Little more than a week after 9/11, Cofer Black gave instructions to his CIA team before their mission. "I don't want Bin Laden and his thugs captured, I want them dead … I want to see photos of their heads on pikes. I want Bin Laden's head shipped back in a box filled with dry ice. I want to show Bin Laden's head to the president. I promised him I would do that."

A month later, at a meeting sponsored by Schwab Capital markets, CIA executive director "Buzzy" Krongard laid out for investors what such a war would entail. "[It] will be won in large measure by forces you do not know about, in actions you will not see and in ways you may not want to know about," he said.

Back then there wasn't a treaty that couldn't be violated, a principle waived or a definition parsed in the defence of American power and pursuit of popular revenge. To invoke the constitution, the Geneva convention or democratic oversight was evidence that you were out of your depth in the new reality. Laws were for the weak; for the powerful there was force. This was not just the mood of a moment; it has been policy for more than a decade.

Obama's arrival offered a shift in focus and style but not in direction or substance. "I don't want [people at the CIA] to suddenly feel like they've got to spend all their time looking over their shoulders," he said shortly before his first inauguration. It was never difficult to see what could go wrong with this approach. But it has, nonetheless, been shocking to see how wrong things have gone. As covert operations were shielded from oversight, so human rights violations became not just inevitable but routine.

In a 2004 report military intelligence officers told the International Committee for the Red Cross they believed between 70% and 80% of the detainees in Iraq were innocent. The nods and winks became permanent tics – so reflexive they embedded themselves in the institutional subconscious. "The most serious thing is the abuse of power that that allows you to do," Lawrence Wilkerson, former secretary of state, Colin Powell's chief of staff, told Jeremy Scahill in his book, Dirty Wars. "You find out the intelligence was bad and you killed a bunch of innocent people and you have a bunch of innocent people on your hands, so you stuff 'em in Guantánamo. No one ever knows anything about that. You don't have to prove to anyone that you did right. You did it all in secret, so you just go to the next operation. You say, 'Chalk that one up to experience'… And believe me that happened."

The logic driving this state of affairs is not only self-fulfilling, it's self-perpetuating. The more they act with impunity the more abuses are committed, the more they have to cover up and the more secrecy they need. So long as it happened abroad, the consequences for the American polity were limited. Abu Ghraib and drone attacks cost precious few votes or senior careers. But it was only a matter of time before these ramifications started making themselves felt at home. Foreign policy doesn't take place in a vacuum; it's co-ordinated by and incorporated into the same system that elaborates domestic policy. Once you have told operatives to take their gloves off and fight dirty on the road they don't just start playing by Queensbury rules at home.

Those openly called on to flout international law in the interests of a higher good do not then suddenly submit that goal to domestic law once they've gone through customs. Once the state has deliberately created space for power to be exercised without accountability those who occupy that space will protect it against enemies domestic and foreign. When your war is global and unending it inevitably comes home and keeps going. The monster the US has unleashed on the rest of the world is steadily devouring its own.

This is not new. The origins of the Watergate scandal, in which President Richard Nixon bugged his electoral opponents, lies in Nixon's secret bombing of Cambodia; McCarthyism had its roots in the cold war.

But during the war on terror the process has become particularly pronounced. In recent months, it has emerged that the CIA has been spying on investigators from the Senate intelligence committee – the very committee charged with overseeing the CIA. The investigators, who were authorised to examine CIA documents relating to interrogation methods, found a withering internal review which concluded with the finding that torture techniques, like waterboarding, used in "black site" prisons had been ineffective. This was particularly troublesome because the CIA director had argued the opposite before the committee, contradicting the agency's own findings. When the CIA discovered that the investigators had the review, it started going through their computer logs to find out how they had got hold of it.

In short the CIA spirited people away and tortured them, concluded this was useless, suppressed those conclusions, lied about them to elected officials and then spied on the people who had a democratic mandate to discover the truth precisely because they discovered the truth. Those black sites in far away lands have sister cities within the democratic process.

The defence for this duplicity is invariably national security. To be kept safe we must also be kept ignorant; to protect democracy it must be undermined. The unfettered phone surveillance of American citizens by the National Security Agency revealed the degree to which politicians collude in much of this – asking soft ball questions and apparently happier being fobbed off than taking on the democratic responsibilities.

"You can get caught up in that world. There's a certain glamour to it I think for a lot of elected officials," Senator Martin Heinrich, who is on the intelligence committee, told Politico. The price for that glamour is high and we all pay for it.

But nobody can claim we weren't warned: "We've got to spend time in the shadows in the intelligence world," former vice-president Dick Cheney said shortly after 9/11. "A lot of what needs to be done here will have to be done quietly, without any discussion … That's the world these folks operate in, and so it's going to be vital for us to use any means at our disposal … to achieve our objective."

Those shadows are long. They have concealed unspeakable horrors abroad. Increasingly they are casting darkness at home.