Astroturf Is A Petroleum Product

Big Oil seems to be using veterans to push its Keystone XL agenda. 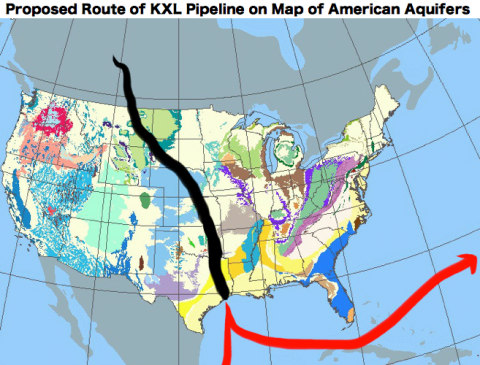 American culture reveres few things as highly as the veteran. They deservedly get respect for having worn their nation’s uniform and gotten their hands dirty at the behest of their civilian leaders. Many have faced the horrors of combat, suffering mental and physical scars for their efforts. To cheapen that service and sacrifice for private gain is considered the height of disgrace.

But that, apparently, is exactly what Big Oil is doing to push its Keystone XL agenda.

On Capitol Hill Wednesday, several members of Congress, the Canadian ambassador, executives from TransCanada and the American Petroleum Institute, as well as a veterans organization held a press conference pushing KXL as the answer to Russian aggression in Crimea, a means to bolster U.S. energy independence, and the key to generally solve any number of international crises.

The last part is only a minor exaggeration. As Omaha World-Herald Washington bureau chief Joseph Morton noted, “Previously, pipeline supporters have tied the project to subjects including the conflict in Syria and the disclosures of classified material by Edward Snowden.”

It’s little surprise that API and TransCanada are trying to whip up a frenzy about KXL as a panacea for American international diplomacy. They’ve spent millions of dollars on lobbying and have a wide-ranging, self-serving agenda for national energy policy. Likewise, their congressional cohort, Sens. John Hoeven, (R-N.D.), and Joe Manchin, (D-W.Va.), and Rep. Lee Terry, (R-Neb.), are paid shills for Big Oil, to the tune of $293,237, $259,150, and $334,645, respectively. And since Canadian Prime Minister Stephen Harper– who cut his political teeth in Canada’s oil country, Alberta– is widely considered something of a sugar daddy to tar sands oil companies, the ambassador’s presence is to be expected.

But what’s the deal with the veterans group?

Leaving aside for the moment the question of just what expertise former military officers might bring to bear on international trade, energy, and environmental policy, (and, for that matter, the obvious jokes about this not being the first time the military has been exploited in the service of Big Oil), one has to wonder how men and women who have served in uniform come together around an issue like oil pipeline development.

That seems to be a fair question, as it was addressed at the press conference. As Morton reported, retired Rear Adm. Don Loren, an advisor for Vets4Energy, spoke on behalf of the group.

Loren said the pipeline is key to projecting American strength and fostering a robust economy.

“All the world’s eyes are watching this decision,” he said. “They want to know whether we will move forward.”
How America projects strength by turning its agricultural heartland into a toxic spillway to send dirty Canadian oil to foreign consumers is a question that apparently nobody asked. But they did ask where Vets4Energy gets its money. Again, from Morton: "Loren acknowledged that his group gets funding from the American Petroleum Institute, but said it represents an independent voice from veterans who believe in the issue."

To say Vets4Energy “gets funding” from API seems to grossly understate the case. Let’s hear from API about its relationship with V4E: "The American Petroleum Institute’s Vets4Energy campaign returns to the nation’s capital this week. Twenty-six veterans are meeting members of Congress and staff to discuss why burgeoning North American energy resources are vital to improving our national security."

That’s an API press release from 2013 written by API media contact Sabrina Fang, who presumably knows the relationship between the organizations. V4E’s website is hosted by a group called America’s Energy Forum, which funny enough is an astroturf project of API. (The two groups’ website Terms of Use are virtually identical recitations of torpid legalese, suggesting a more-than-casual relationship.)

There seems to be little evidence of rank-and-file veterans’ membership, but V4E’s public face includes the names of a small handful of senior officers, the type who trade the cachet of their rank into cushy advisory gigs upon retiring, often for companies they dealt with in the military. The group’s chairman (according to the Anchorage Daily Planet; V4E’s website doesn’t list any organizational leadership) is a former mayor of Anchorage who also happens to be former vice president of Alyeska Pipeline Service Company, an API member.

V4E is not listed as a non-profit by the IRS, meaning it’s not required to file public tax forms, so we can’t know whether any of its “volunteers” are compensated for their dedication to the cause. But in an API YouTube video, we can see API’s CEO and president Jack Gerard giving a pep talk at a lavish pre-lobbying meeting for high-ranking veterans, who according to Loren have a special right to speak to members of Congress about energy policy.

This sounds less like “an independent voice from veterans” than it does a bought-and-paid-for front group for Big Oil.One hesitates to call a retired officer and former Deputy Assistant Secretary of Defense Homeland Security Integration (even if he does appear to be trading on his military and homeland security service in a advisory gig with a international security consulting firm) a liar, but if a multimillion-dollar corporate lobbying group bankrolls the organization as a “campaign,” seeds it with corporate consultants, and organizes pep rallies for its “grassroots” lobbying, its independence is suspect at best.

It’s unclear whether Loren is paid by API for his “advisory” role with V4E, though he apparently travels and speaks on the group’s behalf. And, according to Sun News Network (a Canadian right-wing news outlet unaffectionately called “Fox News North,” headed by a former advisor to Prime Minister Harper), Loren now speaks on behalf of American veterans as though he were their commander, giving their “endorsement” to Keystone XL.

I am in no position to tell Loren what he may do to profit from his military and civilian service to his country, however unseemly I find it to be. However, one need not be a veteran to know that anyone who presumes and pretends to speak on politically volatile issues on behalf of those who have served does no honor to their service.

Perhaps in this instance, Loren is an innocent victim of others’ inferences. In which case, shame on Sun News, API, TransCanada, Sens. Hoeven and Manchin, Rep. Terry, and anyone else who makes veterans their unwitting and unwilling props in a cheap stunt to sell out their country to a foreign corporation.

[Dave Saldana is the writer, director, and producer of the short documentary, "Keystone PipeLIES Exposed," a project of the Center for Media and Democracy Investigative Fund.]