Caterpillar avoided $2.4bn in US taxes 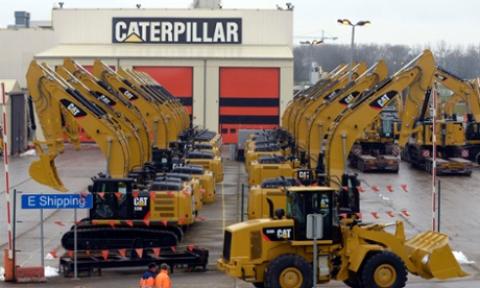 The world's largest maker of construction and mining equipment, allegedly avoided paying more than $2.4bn in US taxes over a decade by striking a deal with Swiss tax authorities., Eric Vidal /Reuters

One of the world's biggest manufacturing companies diverted more than $8bn in profits to Switzerland in order to avoid US taxes, according to investigators working for the Senate.

Caterpillar, the world's largest maker of construction and mining equipment, allegedly avoided paying more than $2.4bn in US taxes over a decade by striking a deal with Swiss tax authorities to pay as little as 4% on the profits from its lucrative international spare parts business through a Geneva-based subsidiary.

Though the practice of basing such subsidiaries offshore is widespread among multinationals, and Senate investigators refused to say whether they believe the company broke US tax law, the elaborate accounting strategy appears to take so-called 'transfer pricing' practices to new extremes.

The report, which was produced by the Senate subcommittee on investigations under chairman Carl Levin, a Michigan Democrat, claims that 85% of Caterpillar’s international profits from selling parts – its most profitable activity – were routed through its Swiss subsidiary, even though the vast majority of associated manufacturing, research and employment remained in the US.

“Caterpillar is an American success story that produces phenomenal industrial machines, but it is also a member of the corporate profit-shifting club that has shifted billions of dollars in profits offshore to avoid paying US taxes,” Levin told reporters in a briefing on Capitol Hill.

“The manufacturing workers who make world-class parts, the managers who operate its parts operations, the warehouses where they are stored – none of that changed,” he added. “But in the fantasy land that is international tax law, tax lawyers waved a magic wand to make millions of dollars in US taxes disappear.”

Executives from Caterpillar, some of whom will appear before the Senate committee on Tuesday to testify publicly on the strategy, insist that its Swiss affiliate performs “valuable intangible services”.

But Levin's staff claim that a senior tax official at the company previously testified under oath, after receiving a subpoena from the committee, that there was no business advantage to the arrangement other than tax avoidance.

The congressional investigation was sparked by a whistleblower who sued Caterpillar in 2011 for demoting him, allegedly after he raised internal concerns about the practice. The company eventually settled out of court with the whistleblower, Daniel Schlicksup, who was a global tax strategy manager for Caterpillar from 2005 to 2008.

In a statement issued by the Illinois-based company on Monday, Caterpillar described its tax arrangements as “prudent and lawful business planning that is common among responsible US multinational corporations”.

“In fact, Caterpillar’s effective income tax rate averages about 29%, which is one of the highest for a US multinational manufacturing company. Caterpillar’s philosophy is that our business structure drives our tax structure. We comply with the tax laws enacted by Congress, by the states and by all of the many jurisdictions in which we conduct business.”

The Senate's investigation of tax avoidance by US multinationals, which has previously targeted companies such as Apple, Microsoft and Hewlett-Packard, has been criticised by some Republicans, who say that it demonises corporate America. And Arizona Republican senator John McCain, for one, disagrees with some of the Democrat-controlled committee’s conclusions on Caterpillar, Levin said.

At a hearing last May, Apple chief executive Tim Cook said the only long-term solution to the issue is to lower US tax rates, thereby encouraging multinationals to repatriate profits that build up off shore in their international businesses.

Levin said Caterpillar’s accounting, which according to the report it paid $55m to PriceWaterhouseCoopers to develop, is particularly aggressive because so much of the company's parts business is clearly based in the US and other high-tax jurisdictions, rather than at its Swiss subsidiary, which was previously just a regional dealer prior to the strategy being implemented in 1999.

In their report, committee investigators say that Caterpillar Inc in the US is home to 4,900 parts employees, 54 manufacturing facilities and 10 warehouses storing and shipping 1.5bn parts around the world.

The Swiss subsidiary, on the other hand, employs just 65 staff and is home to no parts manufacturing or warehouses, the report claims.

Levin has introduced a bill in the Senate that would, if passed by Congress, close perceived loopholes in current tax rules governing how multinationals are required to account for profits channeled through subsidiaries.