Stoking Fire: A Global Look at the Right's Anti-Gay Rhetoric

Globalizing Homophobia reminds us that a tangled web of right-wing organizations are working hard to reverse LGBTQ civil rights at home and curtail gay activism abroad. These groups are well-funded and well-connected, and while same-sex marriage is the hook they use to ensnare followers, their actual agenda is far more insidious. The goal? To shove queer communities back into the closets of denial and self-hate. 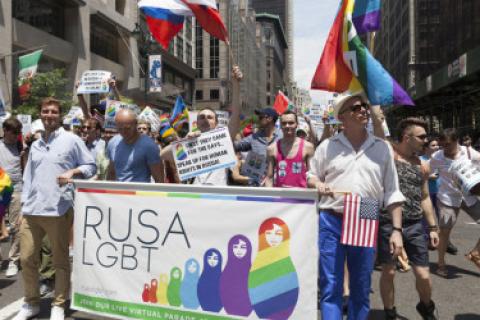 During the 45-year Cold War between Western-allied countries and those of the Eastern bloc - 1947 until the USSR collapsed in 1992 - the right wing had nothing nice to say about Godless Communism, dubbing it the Red Menace. But a little more than two decades later, there's been a complete shift - much of the world's religious and secular right wing now sees the region, and Russia in particular, as "the savior of civilization."

The reason? Hatred of homosexuality.

Globalizing Homophobia: How the American Right Supports and Defends Russia's Anti-Gay Crackdown, a report produced by People for the American Way (PFAW), charts the growth of this movement and offers chilling details about its spread.

Report contributor and PFAW Senior Fellow Peter Montgomery told RH Reality Check, "The right has lost support in the United States and Western Europe on the issue of LGBTQ equality. From their perspective, the work to save the family has to happen elsewhere. They presumably hope that if Russia and Eastern Europe can be turned on this issue, the ideology can later be exported back to the West. Rather than more traditional mission work to spread Christianity, these groups are now pushing on homosexuality."

"They're outraged that the United Nations has been used to promote the idea that LGBTQ rights are human rights and that these rights should be internationally recognized," he said. "That's why they're going to Eastern Europe, Muslim countries, and the Vatican to seek allies."

And it's not just the U.S. right that had jumped full-tilt into the campaign. Despite the report's title, Globalizing Homophobia notes that Collectif Famille Mariage, one of France's most prominent anti-marriage equality groups, has aligned itself with other far right "pro-family" organizations in the country, including the nationalist Dies Irae, the Mouvement Catholique des Familles, and Catholiques en Campagne. One of their chief U.S. allies is activist Brian Brown of the National Organization for Marriage (NOM). Together, these groups have raised money to bolster anti-gay mobilizations in Lithuania, Moldova, Russia, Serbia, and Ukraine.

The fundraising and organizing have paid off. Victories in Russia - from laws banning the dissemination of "gay propaganda" to prohibitions on actions, like those of Pussy Riot, that "offend religious feelings" - have been a shot in the arm to homophobes the world over. What's more, through the World Congress of Families, a 17-year-old Illinois-based organization that was founded by conservative activist Allan Carlson to promote "the natural family" - an entity the WCF believes was "ordered for the procreation of children and the expression of love between husband and wife in the covenant of marriage" - a host of "pro-family" policies have been transported to foreign lands.

Alexey Komov, WCF's man in Moscow, and his colleagues take great inspiration from the U.S. anti-abortion and anti-LGBTQ movements. Among the victories he celebrates are newly passed laws restricting abortion for Russian women. Among the familiar-sounding hurdles, Russian women now need to wait between requesting the procedure and having an abortion. Equally pleasing to Komov are laws banning same-sex couples from adopting - they call it "corrupting" - orphaned or abandoned children who live in state-run facilities. But the icing on Komov's cake is the fact that the 8th World Congress of Families, an event that will bring Eastern European, African, South and Central American, and Middle Eastern conservatives face-to-face with mentors from Focus on the Family, the Christian Broadcast Network, NOM, and FOX News, will be held in Moscow next September. The conference theme, "Every Child Is a Gift: Large Families, the Future of Humanity," is a blatant attempt to forge international alliances between anti-abortion, anti-contraception, and anti-gay activists.

That Russia is at the center of this movement and is seen by the right as "the Christian savior of the world" is mind-boggling. Komov, the report explains, sees his homeland as "the last bastion of moral values against a UN sponsored push to recognize gay rights around the globe." His unlikely hero is Vladimir Putin. In defending Russia's leader, Komov argues that "Putin and other Russian leaders have not only turned away from their Communist past and involvement with the KGB, but are Bible-believing Christians today."

But Bible-thumping aside, it is the ideology of hate - the notion that if same-sex couples are allowed to marry and rear children, there will be a slew of "negative developments all over the world" - that is most concerning to PFAW. They're also troubled by the hyperbole used to drum up anti-gay hysteria. Some of the most egregious examples come from French nationalist Fabrice Sorlin, who the report quotes as "comparing Russia's anti-gay stand to its protection of Europe against Mongol hordes in the thirteenth century and against fascism in the twentieth." U.S. leaders who tie gay sexuality to Satanism and child molestation are, of course, equally culpable in revving up discrimination and prejudice.

What's more, while the Russian and Eastern European embrace of anti-gay policies has clearly pleased the American right wing, this is not the only part of the world to capture financial or on-the-ground support from American activists. "Infamously," Globalizing Homophobia continues, "American religious right leaders' financial and political support has been inflaming anti-gay passions in Uganda for years, leading to the 2013 passage of a bill that imposes a life jail sentence for `aggravated homosexuality.' American conservative activists Lou Engle and Scott Lively traveled to Uganda to help rally support for the bill, spreading apocryphal stories of the harms that come from gay rights."

These men have also had a hand in helping conservatives in Belize uphold that country's criminalization of homosexuality. Similarly, the U.S. right has raised funds and worked behind the scenes to promote homophobia in countries as disparate as Jamaica, Peru, and Nigeria. Indeed, momentum has been so great that in mid-February Scott Lively and Peter LaBarbera, president of Americans for Truth about Homosexuality, formed the Coalition for Family Values. Whether this group will compete with, or complement, the World Congress of Families is anyone's guess.

Despite these developments, PFAW's Peter Montgomery says fissures between different factions of the right wing have become increasingly apparent in recent weeks. "In mid-March, Concerned Women for America announced that it was pulling out of the WCF's 2014 Summit because of Russia's bad behavior toward Ukraine," he said. "Some on the right are clearly trying to figure out what their next best move is and there are evident conservative splits. A few weeks before the CWA pulled out, Ted Cruz spoke at a Heritage Foundation event and he slammed Putin. While many of his religious right allies are saying that Putin is the savior of world Christianity and are extolling him, others want to hold Putin responsible for his aggression. We need to push that divide."

That said, Globalizing Homophobia reminds us that a tangled web of right-wing organizations are working hard to reverse LGBTQ civil rights at home and curtail gay activism abroad. These groups are well-funded and well-connected, and while same-sex marriage is the hook they use to ensnare followers, their actual agenda is far more insidious. The goal? To shove queer communities back into the closets of denial and self-hate. Scott Lively, for one, said as much at a press conference announcing the formation of the Coalition for Family Values. When asked what about the group's raison d'etre, he told reporters that unlike other "pro-family" efforts, it will condemn all things homosexual, not just same-sex marriage, as an affront to decency and civilized behavior.

[Eleanor J. Bader is a teacher, freelance writer and activist from Brooklyn, NY. She is also the co-author of Targets of Hatred: Anti-Abortion Terrorism, St. Martin's Press, 2001.]