About 7.4 million Americans – up from 7.2 million as of November – are working part-time but would like to be working full-time. 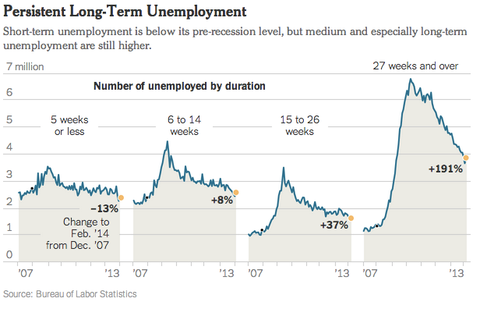 At first blush, it’s great news. The number of long-term unemployed Americans – meaning those out of a job for more than six months – has dropped to 3.7 million in March from a high of 6.8 million in April 2010. The ranks of the long-term jobless have plummeted by 837,000 over the past year alone, helping to drive down the unemployment rate.

But not so fast. The labor market has largely normalized in terms of short-term unemployment. But it gets worse and worse the longer you’ve been out of a job. As the chart that ran with a story I wrote today shows, short-term joblessness is actually well below its 2007 level. Long-term joblessness is still more than twice as high.