Twins’ Immune Systems Look Like Those Of Complete Strangers

When it comes to our immune response, genetics takes a back seat to pathogens. 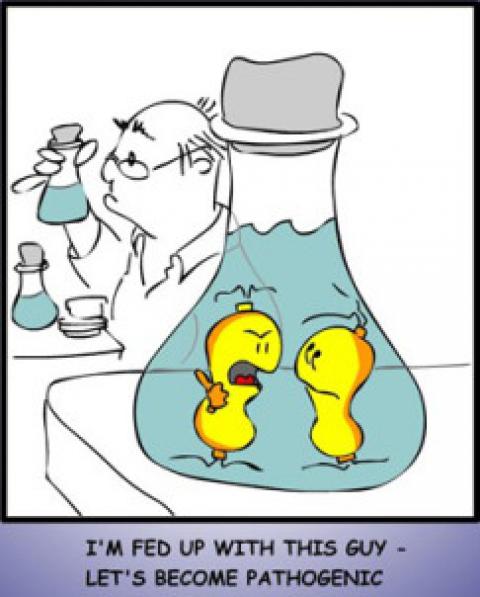 Our adaptive immune system, the one that responds to specific pathogens, relies on T cells and B cells. These cells make proteins that have a key job: distinguish between the harmless proteins in all of our cells and foreign proteins that may be harmful. In T cells, these molecules are creatively called T cell receptors (TCRs), and in B cells they are antibodies.

Each individual has a unique set of TCRs and antibodies—their immunorepertoire—selected by the interplay between her genetic makeup and the proteins to which she's been exposed. But which of these two factors dominate?

The region of the genome that encodes these molecules is super complex. It consists of genetic cassettes that are linked in different combinations to generate diverse receptors that can recognize many potential invaders. First there are about 50 segments of DNA called V, for variable; next come a bunch of D segments, for diversity; then J for joining; and lastly C for the constant region at the base of these receptors. In a process called V(D)J recombination, each T cell and B cell picks one V segment, one D segment, and one J segment, then links them up to make a complete gene that includes a unique protein binding site.

Once the receptor is complete, T cells have to go through a brutal rite of passage where their receptors are evaluated. If a T cell makes a receptor that recognizes a "self" protein, that T cell is killed.

This system can generate approximately 1015 different sequences—more than the number of people on Earth. So if the process were truly random, you’d expect a small bit of overlap between individuals’ TCRs, but only because they’ve been exposed to some of the same pathogens. But if genetics helps determine which segments of DNA help generate the immunorepertoire, the overlap between individuals would be larger in related individuals, and greatest in identical twins. After all, they share the same genes and, when reared together, get exposed to the same environmental factors.

A number of caveats. Obviously, six girls is hardly an adequate sample size to conclude much of anything. In addition to sharing genes, the twins also shared an environment, so this might not be the best system to tease out genetic from environmental contributions to the TCR repertoire. This is highlighted by the fact that the shared TCRs recognized common pathogens, like the Epstein-Barr virus.

This work has raised the tantalizing possibility that we can possibly figure out how much of our immune diversity is genetically determined. But as with most twin studies, the really interesting data will be generated by analyses of identical twins raised in different environments.