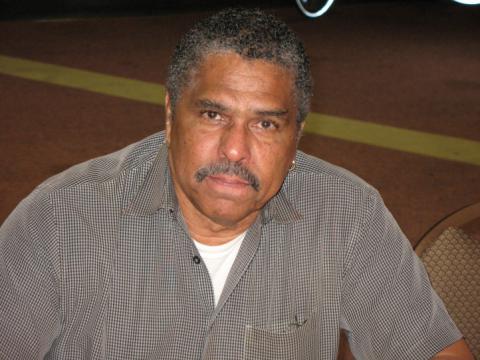 “One is responsible to life: It is the small beacon in that terrifying darkness from which we come and to which we shall return. One must negotiate this passage as nobly as possible, for the sake of those who are coming after us.”

“The Fire Next Time”

Carl Bloice, Foreign Policy In Focus columnist and blogger, and long-time African-American journalist, negotiated that journey with power and grace. Right up to the moment when he lost his long battle with cancer, he was contributing to the website /Portside/ and struggling to complete a column on the Middle East. He died in San Francisco April 12 at age 75.

He was a journalist his whole life, although he began his love of words as a poet. Born Jan. 28, 1939 in Riverside, Ca., he grew up in South Central Los Angeles at a time when racism and discrimination were as ubiquitous there as palm trees and beaches. He was one of those people who could not bear the humiliation of silence in the face of injustice and that simple—if occasionally difficult—philosophy was at the center of who he was. Civil rights, free speech, the war in Southeast Asia (and later Central America, Yugoslavia, Afghanistan, and Iraq), women’s rights, homophobia, and the environmental crisis: wherever the dispossessed were voiceless, Carl Bloice spoke for them.

He was also my friend, for 44 years my colleague and co-conspirator, and the person who taught me how to write and think.  I say this because this is less an obituary about an accomplished African-American journalist than a friend’s funerary oration, something we Irish think is important.

Carl sold me on James Baldwin—and many other essayists, thinkers, novelists and poets—by convincing me that words mattered. He was utterly certain that a well-written piece of prose could tumble a government, shame the mighty, or shelter the powerless.

He was a member of the Communist Party much of his life, finally leaving over that organization’s resistance to internal democracy and it’s reluctance to embrace women’s and gay rights, and the defense of the environment.

In 1962 Carl was one of the first northern journalists to cover the southern civil rights movement, and he was staying at the A.G. Gaston Motel in Birmingham, Al. when the Ku Klux Klan tried to murder Rev. Martin Luther King Jr. with a bomb. It blew Carl out of his bed.

He recognized Watergate for what it was months before the mainstream press caught on to the profound corruption at the heart of the scandal and covered it for two years. He reported from Moscow, Central Asia, North Korea, Mongolia, Eastern Europe and the Middle East. He was on the editorial board of the /Black Commentator/ and wrote columns for FPIF on Israel, Libya, Argentina, Afghanistan, Cuba, and the growing and disturbing U.S. military presence in Africa.

He was also a very funny man who loved to eat, drink and gossip. Indeed, the two of us decided that we had stumbled into a profession that gave us the perfect cover to engage in our favorite past time. Yes, yes, we talked politics—mainly foreign policy—but if the antics of the Kardashian clan slipped into the conversation, well, that was okay.

We dearly enjoyed spotting linguistic slights of hand. In the April 19 edition of the /New York Times/ a reporter was going on about German-Russian tensions over Ukraine, and how Berlin is more comfortable with diplomacy—specifically the upcoming Ukraine-Russia-U.S.-European Union talks in Geneva—as opposed to some of the Cold War-type rhetoric that has been flying around:

She wrote, “…diplomacy at last had a chance. Germany was back on familiar terrain—represented in Geneva, notably not by its own diplomat but by Catherine Ashton, the foreign policy chief of the 28-nation European Union, a partnership often gently mocked in Washington, but hallowed in Berlin as the real, if cumbersome, governing body of Europe.”

I love those words “gently mocked.”

They made me recall a conversation this past February between U.S. Assistant Secretary of State for European and Eurasian Affairs, Victoria Nuland, and the American Ambassador to Ukraine, Geoffrey Pyatt. The two were plotting how to overthrow the elected government of President Viktor Yanukovych and install their handpicked guy in Kiev, and Nuland said, “Fuck the EU.”

Two weeks ago I would have phoned Carl and we’d have had a good laugh, but today there is no one to pick up the phone. The hardest thing about death is the silence it brings into our lives.

Carl believed that words could empower the majority of humanity to reclaim their world from the 1 percent. In this he was much like his fellow poet, Percy Shelley, who penned these words of outrage in the aftermath of the 1819 Peterloo Massacre when cavalry charged into a Manchester crowd that was demanding democracy, killing 15 and wounding hundreds:

Which in sleep had fallen on you—

Ye are many—they are few”

Good night sweet poet. This harp shall ever praise thee.