It takes an enormous amount of chutzpah for Fitzgerald to so strenuously oppose the efforts of his players to have a seat at the table when he is making $2.2 million per year and received a $2.5 million loan from the school upon signing his most recent contract. Yet Fitzgerald's stance is not only distasteful. It may be illegal. 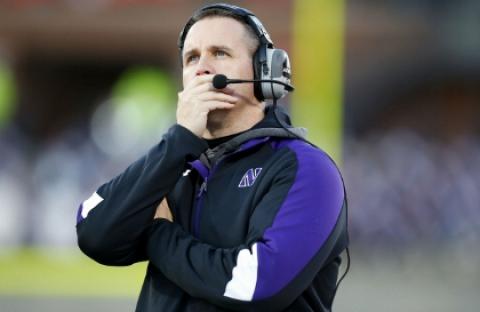 On Friday, the Northwestern University football squad will be voting about whether or not to become the first NCAA team to unionize. The Wildcats - and how perfect a name is "wildcats" - will be voting to have a seat at the table to discuss the manifest issues that come with playing a "sport" that requires as much as sixty hours a week of their time. They are also voting despite ominous warnings from their coach Pat Fitzgerald that a union has no place in their locker room. In Coach Fitzgerald's world, there will be no dental plan no matter how badly Lisa needs braces.

As discussed previously, it takes an enormous amount of chutzpah for Fitzgerald to so strenuously oppose the efforts of his players to have a seat at the table when he is making $2.2 million per year and received a $2.5 million loan from the school upon signing his most recent contract. Yet Fitzgerald's stance is not only distasteful. It may be illegal.

Here is the substance of the email that Fitzgerald sent to is team on April 14. He wrote, "Understand that by voting to have a union, you would be transferring your trust from those you know  -  me, your coaches and the administrators here  -  to what you don't know  -  a third party who may or may not have the team's best interests in mind... In my heart, I know that the downside of joining a union is much bigger than the upside. You have nothing to gain by forming a union."

Fitzgerald is also part of what The New York Times called, "A Blitz to Defeat an Effort to Unionize", where members of the Northwestern administration, trustees and alumni are devoting an incredible amount of time and resources to make sure that a few dozen teenagers know their place. CBSSports.com obtained a copy of a twenty-one-page anti-union manifesto distributed to players rife with portentous warnings about what a union could bring.

People may disagree about whether what Fitzgerald is doing is immoral. But is it illegal? Attorney Lester Munson said on ESPN.com, "As the employer, Fitzgerald [and his assistants] are entitled to urge "no" votes. They can try to explain to the players that the union is a bad idea for them and for the school, but they must be careful in what they say. Under the law that governs union elections, Fitzgerald and his crew may not indulge in statements that could be viewed as threats, promises, interrogations, [or] retaliation." (my emphasis)

In attempting to understand, whether based solely on what we know, if Fitzgerald is acting in an illegal manner, I thought it would be best to ask a labor lawyer with some experience in these matters. I spoke with Tony Paris, lead attorney with the Maurice & Jane Sugar Law Center for Economic and Social Justice - a nonprofit organization, dedicated to issues that low-income people face around the country.

Mr. Paris said, "Unfortunately, coach Pat Fitzgerald may deserve a flag for encroachment on the legal line of scrimmage in that his comments seem to imply that there will be worse conditions at Northwestern if the union is voted in. This is especially true given the power dynamic between football coaches and their players and when you take into account that many of these athletes' livelihoods depend on their future in the program. The coach is entitled to his opinion, but his claim that the downside of unionization is `much bigger'  -  could arguably be construed as a threat and/or imply some sort of reprisal. This impairs the free and informed atmosphere needed to allow the players to fully express their choice in Friday's election."

I want to focus on one part of what Mr. Paris' statement: "the power dynamic between football coaches and their players." Anyone who has ever played or covered football knows that it is organized in a manner no one would confuse with a consensus-based organization. It is a structure both militaristic in design and authoritarian in culture. The NCAA in particular has designed college football in a way that makes players as powerless as possible. They serve at the pleasure of the coach. Their medical care, their travel schedules and even their ability to take the classes of their choice are subject to the whims of people whose bottom line and lucrative salaries are dependent upon their ability to win games. This structure is incredibly lucrative for coaches, administrators, and the bureaucracy of the NCAA and it is the resistance to this structure that they are trying so desperately to contain in Evanston, lest it become a national movement in locker rooms around the country. To do this, Pat Fitzgerald is clearly establishing an atmosphere where "threats" are more than implied: they're omnipresent.

No matter how tomorrow's vote goes, and it may take months before we know the results, the NCAA will never be the same. They are already offering up piecemeal reforms as a way to stem the tide, but the wine is out of the bottle and the horse has left the barn. As Richard Trumka, President of the AFL-CIO said, "Just getting to the vote was a major victory for the players, whose major concerns about fairness, working conditions, safety and medical care - especially after their playing days are over but their injuries are not - were not being heard or addressed by Northwestern." This is true. But even after the smoke has cleared, Pat Fitzgerald should be held accountable for his efforts to use his power over these young men to prevent them from having a seat at a table that has kept him very well fed.