The audit found that the paid sick days law didn’t harm business, job, or wage growth in the city. 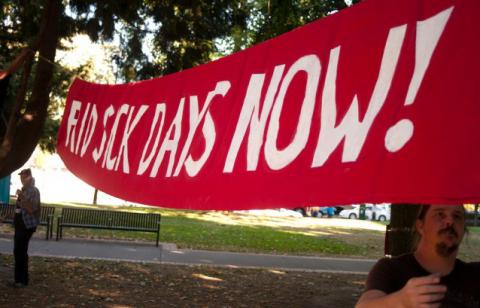 The majority of Seattle businesses support the paid sick leave requirement that went into effect in September of 2012 and report few, if any, costs or challenges, according to a new audit from the Seattle Office of the City Auditor with help from the University of Washington.

Seattle’s paid sick days law requires employers with more than four employees to provide leave for those who are sick or need to deal with a critical safety issue to all workers, including those who are full time, part time, and temporary.

The audit found that 70 percent of employers in the city support the law, with 45 percent saying they are very supportive. This held true for businesses of all sizes. “These business owners, managers, and human resources professionals view paid leave as a valuable and important benefit for their workers,” the report says.

It’s not hard to see why they might feel so supportive. The costs and impacts “have been modest and smaller than anticipated,” the audit notes. The majority report no effect on profitability or customer service, with just 17 percent believing that it made them less profitable. The average reported cost of implementing it was about one eighth of a percent of their annual revenue and providing the leave for the first year was on average four tenths of a percent. To deal with any costs, 8 percent raised their prices or otherwise passed the cost on to consumers, 6 percent decreased raises or bonuses, 5 percent decreased vacation time, and just 2.7 percent reduced employment while only 0.7 percent said they closed or relocated.

Businesses also didn’t find it hard to put into practice. Most didn’t find it difficult to implement the various aspects, although the biggest challenge was record keeping, which almost a third said was difficult. Less than a third found it difficult to reassign the work, but for most, they had absent employees either do the work later or other employees cover it, with about 20 percent saying the called in other employees and just 1.4 percent hiring an outside replacement. And despite fears of widespread abuse, “workers used far less paid leave than employers had anticipated,” the audit notes, and most have no concerns or moderate ones about abuse. “Overall, employers judged the impact of the Ordinance as small or negligible.”

Besides the individual impacts, the audit found that the paid sick days law didn’t harm business, job, or wage growth in the city. All three measures grew over the first year after it took place. The number of employers grew more in Seattle than nearby cities. “If anything, the Ordinance seems to have had a positive effect on the hiring sector,” the report notes. While total wages grew more slowly in Seattle than the other cities after it took effect, the report notes, “This effect is not strong statistically and should be interpreted cautiously.” Wages grew both before and after the ordinance, and the researchers found weak correlations between the law and the slower wage growth.

Past preliminary data had come to the same conclusions. It found that job growth, new businesses, and business sales in Seattle weren’t negatively impacted by the law. Job growth was actually stronger, including in retail and food service.

And it’s not the only place to have this experience. In Connecticut, which has had a paid sick leave law in effect for two years, employers have experienced few costs and difficulties and little to no abuse. There, more than three-quarters of them support it, with nearly 40 percent very supportive. San Francisco has had a law in effect since 2007 and business growth increased after it was implemented while jobs weren’t harmed and businesses saw little impact. A majority of employers support it. And in the time since Washington, D.C.’s law went into effect in 2008, business owners haven’t been discouraged from opening up in the city or encouraged to relocate. There are now four other paid sick days laws in effect in the country, and more may soon join.