There’s No Humane Way to Carry Out the Death Penalty

There’s no reason to believe lethal injection is a more humane way to end a life than electrocution, poison gas, hanging, firing squad or even guillotine. Of course, we’ll never know. We can tell ourselves any story we want about how quickly and painlessly death arrived, and the one person who could prove us wrong will never speak again.

May 2, 2014 Eugene Robinson The Washington Post
Printer friendly
There’s No Humane Way to Carry Out the Death Penalty Published May 2, 2014 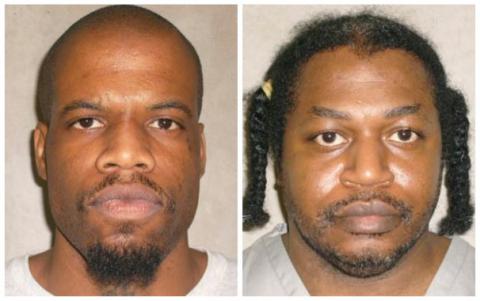 Clayton Lockett, left, and Charles Warner,AP Photo/Oklahoma Department of Corrections
No one who supports the death penalty should have the slightest problem with the way Clayton Lockett died.
Lockett, a convicted murderer, spent 43 minutes in apparent agony Tuesday night as the state of Oklahoma tried to execute him by injecting an untested cocktail of drugs. Instead of quickly losing consciousness, he writhed in obvious distress and attempted to speak. Witnesses described what they saw as horrific.
Prison authorities halted the procedure — they were going to revive Lockett so they could kill him at a later date, presumably in a more aesthetically pleasing manner — but the condemned man suffered a heart attack and died.
The state postponed a second execution that had been scheduled for the same night, but I wonder why. We fool ourselves if we think there is a “humane” way to way to kill someone. Sure, the second inmate, Charles Warner, probably would have suffered an equally agonizing death. But isn’t this the whole point?
When I read about the crimes Lockett committed, I wish I could support capital punishment. When I read about what Warner did, I want to strangle him with my own hands. But revenge is not the same thing as justice, and karmic retribution is not a power I trust government to exercise. The death penalty has no place in a civilized society.
Lockett raped, brutalized and murdered an 19-year-old woman who had graduated from high school just two weeks earlier, shooting her and then burying her alive. Lockett and his accomplices also beat and robbed a 23-year-old man and raped an 18-year-old woman. The crimes took place in 1999; Lockett has been awaiting execution since 2000.
Warner, the other man who was to die in the Oklahoma execution chamber Tuesday, was convicted in 1999 of raping and murdering an 11-month-old child who was the daughter of his live-in girlfriend. The baby suffered unspeakable abuse.
The question is not whether Lockett and Warner deserve to die; clearly they do, as far as I’m concerned. The question is whether our society, acting through the instrument of government, should kill them. I believe there is no way to impose capital punishment without betraying the moral standards that our justice system is theoretically designed to uphold. Put simply, when we murder we become murderers.
Perhaps the most powerful argument against the death penalty is that it is irreversible. Sometimes, judges and juries make honest mistakes and innocent people may be condemned to death. Some studies have shown an apparent racial bias in the way capital punishment is meted out, with blacks who kill whites more likely than other defendants to end up on death row.
Put all this aside for the moment and assume that both Lockett and Warner committed those heinous crimes and that each was convicted in a scrupulously fair trial. The judgment of the state of Oklahoma is that both men must die. How, then, are they to be killed?
What about a public beheading, like in Saudi Arabia? No one would seriously suggest such a thing. Yet a razor-sharp sword surely would have been less agonizing — or at least much quicker — than the drugs injected into Lockett’s bloodstream.
The general idea of lethal injection is to give the condemned a powerful sedative followed by one or more lethal agents. But the sole manufacturer of one of the commonly used drugs stopped making it in 2011. Drug makers in Europe, where the death penalty is considered barbaric, refuse to export drugs to the United States for use in executions. As a result, there have been shortages. Oklahoma was using a new, unproven cocktail to kill Lockett.
Reportedly, Lockett’s vein “blew” shortly after the execution began, meaning that he was not getting the full doses. But his was hardly the first lethal injection execution in which the condemned showed visible signs of great pain.
I would argue that there’s no reason to believe lethal injection is a more humane way to end a life than electrocution, poison gas, hanging, firing squad or even guillotine. Of course, we’ll never know. We can tell ourselves any story we want about how quickly and painlessly death arrived, and the one person who could prove us wrong will never speak again.
But why even pretend? Clayton Lockett was a bad man. Those who believe it was right to kill him have no reason to be ashamed of the way he died — and no right to look away.
Eugene Robinson writes about politics and culture in twice-a-week columns and on the PostPartisan blog.
Subscribe to Portside