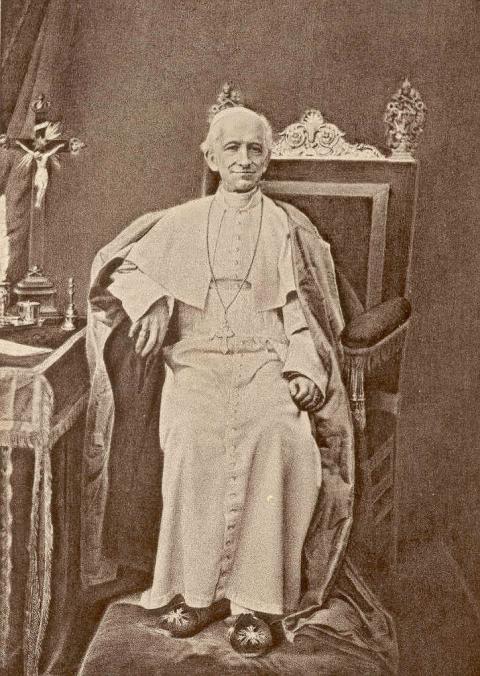 Chiquita's Abandonment of Gulfport for New Orleans Latest Chapter for a Company with a Long, Sordid History

It was on this day (May 15, 2014) 123 years ago that Pope Leo XIII issued his landmark encyclical Rerum Novarum, also known as "The Condition of Labor". It's too bad that officials with major corporations like the North Carolina-based Chiquita Brands International probably have never heard of it.

The document, known as the Magna Carta of Catholic social teaching, firmly established the moral duty to recognize and uphold the rights of workers, including the right to join unions.  In their book Catholic Social Teaching, Peter J. Henriot, Edward D. DeBerri and Michael J. Schultheis sum up the duties Pope Leo XIII outlined for employers and the wealthy:

"Not to treat workers as slaves, uphold dignity of workers, let workers attend to their religious and family obligations, not to impose more work than a person's strength can endure, pay a just wage, not to tamper with worker's savings, to give to the poor after needs have been met."

It was proclamations such as this--written in the late 19th century when unimpeded capitalistic abuse of workers was rampant--that helped lead radical journalist Dorothy Day to join the Catholic Church and later, with French vagabond philosopher-poet Peter Maurin, found the Catholic Worker Movement. "The stink of the world's injustice and the world's indifference is all around us," Day once wrote. "What we need is a revolution. ... If we don't do something about it, people may well say, `Why bring children into the world, the world being what it is?' We bring them into it and start giving them a vision of an integrated life so that they too can start fighting.

"This fighting for a cause is part of the zest of life."

What a perfect day then for Labor South to take a look at one of the major labor stories unfolding in the South, one that requires a look at a long and sordid history to understand. Let's go:

Few major corporations in the United States have an uglier history than Charlotte, N.C.-based Chiquita Brands, once known as the United Fruit Company before that name became synonymous with corporate bullying and corruption in Latin America. The term "Banana Republic" was coined by North Carolina native writer O. Henry in reference to the United Fruit Company's political and economic dominance of the countries in Central America that were home to its vast fruit plantations.

After 40 years of operations in Gulfport, Miss., the company and Louisiana Gov. Bobby Jindall, a darling of right-wing Republicans across the land, announced  this week that it was moving to the Port of New Orleans. Louisiana taxpayers will pay the company between $1 million and $1.4 million annually for its promise to come back to its old stomping grounds in the Big Easy.  Chiquita's roots go back to flamboyant early 20th century New Orleans businessman Samuel Zemurray, known as the "Banana Man", who once commissioned mercenaries to bring down a less-than-friendly Honduran government and replace it with his friends. The mercenaries were successful.

Chiquita's decision to leave Gulfport was devastating news to its unionized workers there. They account for roughly one-third of the annual man hours performed by union workers in Gulfport. Gulfport officials estimate the city will lose about 200 jobs as a result.

What's more, a $570 million project is already underway to restore and expand the Mississippi port, which suffered greatly from Hurricane Katrina in 2005. The project, expected to be finished in two years, was undertaken with the understanding that Chiquita along with three other major tenants would be there to make use of it.

Chiquita will merge with the Irish fruit company Fyffes later this year.

State port director Jonathan Daniels in Gulfport told the Biloxi Sun Herald that Louisiana's incentives to Chiquita amounted to more than the rent and related expenses that the company paid in Mississippi.

Chiquita is a company with a past that includes its use of the dangerous chemical pesticide nemagon on its plantations in Central America even after the chemical was determined to be dangerous and potentially cause sterility and other health problems in workers. The Dole Food Co., another fruit company with ties to North Carolina, also used the chemical even after its use was banned in the United States.

In 2007, Chiquita reached an agreement with the federal government to pay a $25 million fine as a penalty for its dealings with terrorists in Colombia.

As reported by Conde Nast Portfolio magazine, Chiquita provided some $1.7 million in funds between 1997 and 2004 to the United Self-Defense Forces, also known as the A.U.C., a paramilitary group designated by the U.S. State Department as a Colombian terrorist group "whose death squads destroyed unions, terrorized workers, and killed thousands of civilians."

Chiquita officials said the payments were made to protect workers and facilities.

It's a minor miracle that the U.S. Justice Department actually pressed its case against Chiquita, considering the fact that U.S. Attorney General Eric Holder was once Chiquita's top attorney.

This might be an opportune time to remind readers about another major fruit company, Dole Food Company, and its own sorry treatment of workers.

Dole Food Company CEO and owner David Murdock formerly owned textile giant Cannon Mills in Kannapolis, N.C. When the billionaire sold the company to Fieldcrest Mills in 1986, he returned to his home in California with millions of dollars in pension funds from Cannon Mills workers.

It took a lawsuit and legal battle with the Amalgamated Clothing and Textile Workers Union of America (ACTWU) to force Murdock into an out-of-court settlement to return $1 million of the funds. Murdock had spent an estimated $37 of the $102 million pension fund to finance another company takeover.

Murdock, persona non grata in Kannapolis for at least a while, later had the audacity to return and announce the planned creation of a new billion-dollar North Carolina Research Campus on land he still owned there. The center would be a "biopolis" aimed at studying proper nutrition and health care, Murdock said.

What Murdock didn't announce was that at the same time he was committing to proper nutrition and health care study in North Carolina his company was fighting an effort by Nicaraguan workers to get justice for those who had suffered cancer, birth defects and sterility as a result of the company's use of the carcinogen nemagon.