The "so-called" American Revolution was not so much a "revolution for freedom against Great Britain, per se," as it was a shrewd and carefully calculated set of moves on the global chessboard of Real Politik, that amounted to a "Counter-Revolution" against freedom: That is to say, it was a revolution against ending freedom for its slaves and other slaves around the colonial empire. 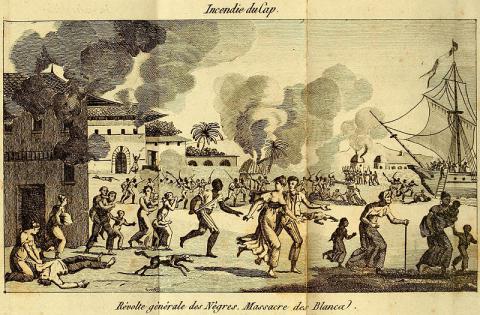 Illustration circa 1815 showing "Incendie du Cap" (Burning of Cape Francais) during the Haitian Revolution. The caption reads: "General revolt of the Blacks. Massacre of the Whites".,

I have read and reviewed many of the books that have tried to fill the gap between the myths about the founding fathers and those that have tried to give a more accurate rendition of the founding era, a rash of new books have hit the streets. The list is simply too long to include here without using up too much space, so I have them simply appended some of them at the end as a short bibliographic appendix.

Led by Professor Gerald Horne, with the current volume, what these new books have done is nothing less than revolutionary itself: For they have generally re-contextualized the global events surrounding the "founding generation of the American Nation itself." And then, more importantly, and more particularly, have also re-contextualized the critical events leading up to the "so-called" American Revolution of 1776. And although there is still much work left to be done, what a magnificent start on that project this book is.

The most valuable of the many contributions of this re-contextualization process is that it adds-in an all-important missing ingredient, the geopolitical factor: the Real Politik of the colonial nations of that era. And here we mean in particular the internecine revolts taking place within Great Britain itself from 1688 onwards, to the constant multidimensional Big (and little) power conflicts going on in the New World itself between the British, it colonies, the French, Spain, Portugal, Native Americans, and most importantly, (and almost always missing in the canonical literature), Africans.

Couple these Big power clashes of geopolitical interests with the virtual blanket of global brushfires of slave revolts that lit up the entire colonial globe like neon lights leading up to 1776, and the "so-called" American Revolution was always in doubt. Plus, one can easily see how "not ending slavery" in the decades leading up to 1776, was the most pressing imperative on the agenda of England's far flung piss-ant little colony, the "yet-to-be," United States of America. The colonies were equally fearful that soon they would next on the list of colonies being swept-up in the global conflagration of slave revolts littered across the globe, and especially across the British colonial Empire.

Thus the underlying truth of the "so-called" American Revolution is finally now out of the bag, and told in its fullest glory for the first time here. And what Professor Horne has discovered through meticulous research is nothing short of revolutionary in itself: It is that the "so-called" American Revolution was not so much a "revolution for freedom against Great Britain, per se," as it was a shrewd and carefully calculated set of moves on the global chessboard of Real Politik, that amounted to a "Counter-Revolution" against freedom: That is to say, it was a revolution against ending freedom for its slaves and other slaves around the colonial empire. In short, the American-Counter Revolution was an imperative in order for this one little piss-ant British colony to save itself, by saving its number one "cash cow," which was slavery itself.

Against Great Britain's edict to its colonies to end slavery forthwith, brought about through a legal case made by a slave named James Somerset back in London, only the slave-holding colonies of British America flatly refused to follow through. Instead of ending slavery, our much revered and mythologized founding fathers, with the help of one Mr. Thomas Jefferson in particular, launched its own counterrevolution against slavery, and in doing so, unconscionably enshrined the american revolutionary rhetoric forever in the "false" language of "freedom," which all too painfully we have now come to know and understand today that their freedom meant a special kind of "white man only freedom."

The American counterrevolution against slavery, now shamefully known as, and misnamed as, "the American Revolution for freedom," succeeded only because the stars in the geopolitical firmament miraculously aligned perfectly in its favor. In a perfect storm of confluences, all of the competing powers had been forced to use Africans to police their colonies, giving slaves easy access to guns. As a result, the Big Power players because they were extended and did not have enough white people to "police" their slave colonies, all began to collapse like an accordion and fall like a stack of dominoes.

First, the great Napoleon, the leader of France, lost his 15-year war against revolting slave leader Toussant L'overture in Haiti, and was forced to bequeath its North American territory to the U.S. for a mere pittance through the Louisiana Purchase. Oddly, and against its own national self-interests, the slave-holding racist, Virginian, Jefferson, reversed John Adam's policy of support for slaves striving to free themselves, and instead sent aid to its enemy France to help it put down the Haitian slave rebellion. At this very time Jefferson knew that the French were in cahoots with Native Americans, and were gaining ground in the West against the American colonies.

Then Spain, already over-extended and much more dependent even than England on slaves to "police" its colonies in the Americas too, was also forced to pull back to prevent the treasury in Seville and Madrid from going completely broke. Likewise, Great Britain, already under great internal pressure from internecine conflict in London, also was increasingly forced to rely on "slave policing" of its colonies as an absolute necessity to help put down the revolts already going on across the British Caribbean Islands, had forced Great Britain to sue for peace through the above mentioned Somerset case.

As a result, of all these events conspiring against the recalcitrant now nascent racist British Colony, by the time 1776 rolled around, all the smart money was betting clearly again any chance that the British American colonies would survive. Most saw it as a foregone conclusion that the Slavetocracy of British-America, from North to South, would soon fall under its own weight and incompetence, or would be quickly overrun and conquered by a coalition of forces, no lest, and most likely led by Africans, thus eventually with the hope of making British America, the "so-called" United States of America, an African headed empire.

However, against all odds, the American Counter-Revolution of 1776 succeeded and slavery lasted nearly another century due primarily to the "perfect storm" of clashing geopolitical interests taking place above its head, as well as the fortuitous events of the war with Britain that serendipitously worked out in the American colonial's favor.And even though one form of slavery did end in the Old British colony, newer more virulent form emerged as a necessary adaptation to the racism the new nation had instituted to save the institution of slavery.

This is a "tightly-written" narrative that no true American Patriot, or historian will want to miss. It resets the parameters of the American Revolution and uncovers its real underlying meaning, a meaning that goes a long way towards explaining why white racism remains so persistent even today.

[Herbert Calhoun is a Retired Foreign Service Officer and past Manager of Political and Military Affairs at the US Department of State. For a brief time an Assistant Professor of International Relations at the University of Denver and the University of Washington at Seattle. A graduate of the National War College and a Phd from the University of Southern California.]