For the first time since 1984, a single party–the rightist Bharatiya Janata Party (BJP) led by Narendra Modi–achieved an outright majority. Modi’s party garnered 282 seats in the Lok Sabha, while the outgoing Congress Party managed to retain a mere 44 seats. Jadaliyya asked Vijay Prashad, professor of International Studies at Trinity College and the outgoing Edward W. Said Chair in American Studies at the American University of Beirut, to comment on this election... 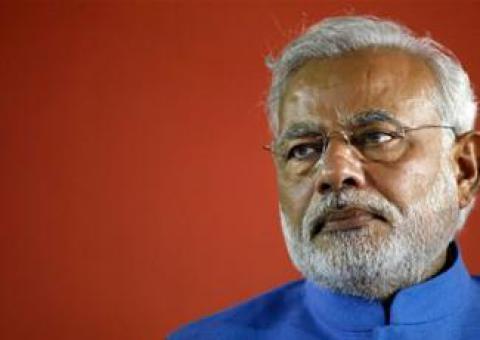 Jadaliyya (J): Why is Prime Minister-elect Narendra Modi considered such a controversial and divisive figure? Is it solely because he leads the rightist Bharatiya Janata Party (BJP)?

Vijay Prashad (VP): Narendra Modi has spent his active political life in the right-wing formation, the Rashtriya Swayamsevak Sangh (RSS), the brains of the Hindu Right, and its political wing, the BJP. The RSS–founded in 1925–emerged into the tradition of nationalism that resembled Mussolini’s National Fascist Party. In 1940, the Hindu Right’s intellectual forefather V. D. Savarkar said, “The very fact that Germany or Italy has so wonderfully recovered and grown so powerful as never before at the touch of the Nazi or Fascist magical wand is enough to prove that those political isms were the most congenial tonics their health demanded.” Savarkar’s RSS and what would become the BJP held fast to ideas of nationalism rooted in blood and soil–clearing a vital space (Mussolini’s spazio vitale) for the Hindus whose dominion should spread across a landscape they call Akhand Bharat–from the borders of Iran to the borders of Thailand.

The RSS’s current head, and the spiritual leader of Mr. Modi, Mohan Bhagwat frequently evokes the glory the consolidation of India. At a speech in Bhubaneshwar in 2007, Mr. Bhagwat said, “Our real freedom can only be achieved through the creation of Akhand Bharat and Sampoorna Samaj.” Akhand Bharat is the reunification of the Hindu Right’s vision of India, and Sampoorna Samaj is the “united society”. In 2012, in Karnataka, Mr. Bhagwat defined this “united society” as not being antithetical to India’s “great diversity in terms of food, culture, language and lifestyle.” He said nothing about religion, but added: “But by a basic inherited ideology of Hindutva we are related and united as a Hindu nation”.

The RSS, Mr. Modi’s parent organization, believes not only in an irredentist foreign policy (the reclaiming of Akhand Bharat) but also a uniform national identity (Hindutva or the Hindu nation). There is no room, in this worldview, for the vast diversity of India, its plural character.

The RSS and the BJP, under Mr. Modi’s watch in the western state of Gujarat, have been shown to have been the authors of anti-Christian riots in Dangs (1998) and of anti-Muslim riots across the state (2002). A number of reports show the close complicity of Mr. Modi’s administration in this violence. It is the reason why there is caution about him. In 2002, the Indian sociologist Ashis Nandy wrote this about Mr. Modi:

More than a decade ago, when Narendra Modi was a nobody, a small-time RSS pracharak trying to make it as a small-time BJP functionary, I had the privilege of interviewing him . . . It was a long, rambling interview, but it left me in no doubt that here was a classic, clinical case of a fascist. I never use the term "fascist" as a term of abuse; to me it is a diagnostic category comprising not only one’s ideological posture but also the personality traits and motivational patterns contextualising the ideology.

It is such a pronouncement–Modi as “a classic, clinical case of a fascist”–that worries many in India.

J: How do you explain the BJP's achieving an absolute majority in the elections, the first time a single party has been able to dominate the Lok Sabha (lower house of parliament) since the 1980s?

VP: The BJP has been out of power since 2004. The party in power, the Congress, pushed a full-throated neoliberal agenda in India. This policy slate–liberalization, privatization and globalization (LPG)–imperiled the population. It increased inequality and brought hundreds of millions of the population into deprivation. But liberalization has a contradictory aspect. It raises popular aspirations. Advertisments for an array of goods and lifestyles flood the popular imagination, and air-conditioned malls with goods in glass windows within reach, grew even in small towns across India. Everyone could see what a luxurious life could look like, and in films and television serials, everyone was told that they too could aspire to this lifestyle. But the lifestyle that they aspired toward could not be provided by the kind of economic policies being promoted by the government. It raised expectations but could not deliver on them.

Such a gap between expectations and possibilities could have benefitted the Left. After all, the Left had been vocal and public about its critique of the neoliberal policy slate. A number of mass demonstrations and national strikes raised the issue of deprivation and joblessness. But the Left ignored the problem of neo-liberalism’s aspirations and the aspirational society that it had created. It was not enough to say that things were bad. It was also not enough to say that what was being aspired toward was not available. That sounded cruel to many people who felt that they were being told they should not aspire to the luxurious life when what the Left was actually saying is that the luxurious life could not be scaled down to draw in the entire population.

The BJP had a clever way to explain the problem. The LPG policy slate opens up massive sites for corruption. Scandals deeply scarred the Congress government. It could not shake them off. A populist upsurge–the Lokpal agitation of Anna Hazare and then the Aam Aadmi Party (AAP)–took up the cudgels against corruption for the “common person.” This is what the BJP also began to talk about. The problem is that this is a very limited critique of neoliberal policies. Rather than offer a strict critique of neo-liberal joblessness, the Lokpal agitation, the AAP and the BJP suggested that it was corruption–a symptom of the problem–that was the problem itself. It was precisely what Corporate India wanted to hear–that it was not neo-liberal policy (LPG) that had to be abandoned but corruption. This is what propelled the BJP past the AAP to become the saviors of India–not from neo-liberal failures (and false aspirations) but from corruption. People should continue to aspire to the luxurious lifestyle, the BJP suggested.

It should be added that the BJP only got a third of the national vote, but in a fractured political landscape that was sufficient for a landslide.

J: How do you explain the Congress Party winning a mere forty-four in the Lok Sabha? What is your prognosis for Congress in the coming years?

VP: The Congress Party could not recover from the association with corruption. It had no answer to it, and could not even defend its own record. Part of the problem is that it was confident that it would be able to scare people over the BJP’s toxic record, and rely upon a fractured mandate to float back to power. This was not to be. The BJP outflanked it on the corruption issue.

Additionally, the Congress suffers from too close an association with the Nehru-Gandhi dynasty, whose current scion–Rahul Gandhi–is a poor politician. He could not articulate the feelings of the people, their anxieties and their aspirations. The journalist Rahul Pandita describes the descent of Mr. Gandhi’s rhetoric,

All these years Mr. Gandhi spoke about the social schemes the Congress party had introduced in a manner similar to how quacks at roadside Himalayan dawakhanas speak of their “herbs” to cure venereal diseases. In the last few months, his laying down his vision for a better India became a comic spectacle. He referred to poverty as a “state of mind” and commented that “the poor can’t eat roads."

If the Congress is serious about its debacle it will go back and revive its old strand of social democratic policy thinking. But this is not on offer. It is now a fully committed neoliberal party, whose old social democratic lineage has been set aside, even smothered. The Congress can only benefit as the BJP fails to meet the aspirations of a population that will see greater inequality and more social instability. These two parties are drawing India into the Democratic-Republican scenario of the United States–a dime’s worth of difference in economic policy, with the divides of social policy sufficient to alert the voting patterns of the moderates.

J: Do you expect the election to have significant consequences for domestic policy in India?

VP: The Congress government led by Manmohan Singh had become unable to push through full-bore liberalization (in the retail sector and in finance) because of pressure from regional parties and its own social democratic remnant. The BJP will have no such pressure. It has a large mandate and five years, as well as the backing of the corporate bloc. They will push ahead with the full liberalization, privatization and globalization (LPG) agenda, which will put severe pressure on the Indian population–including those who voted for the BJP, and its base. This provides the opportunity for struggles in India to germinate, and here the Left and its social democratic allies need to be vigilant. One hopes that the AAP and others will expand from a narrow–but necessary–emphasis on corruption to a look at the social consequences of neo-liberalism. We shall see.

There is a worry that the BJP will turn to its social agenda since it has a hefty mandate–pushing against minority rights both for Muslims and Oppressed Castes, pushing against rights for gays and lesbians; moving toward divisive issues such as building a temple to Ram in Ayodhya. There is an insufficient bloc in Parliament to defend minority rights and fight back against toxic social policies. It will be up to the Left and the regional parties to work together on this.

J: Do you expect the election to have significant foreign policy consequences?

VP: Mr. Modi said little about foreign policy in the election. But his guru, Mr. Bhagwat, speaks adoringly of Israel and Japan. It is likely that the BJP government is going to move toward further normalization with Israel, and it is likely–as I wrote on Mondoweiss–that Mr. Modi will be the first Indian head of government to go to Tel Aviv. This is part of a long-term attempt by the BJP to accommodate itself to US power, and to the US agenda–in the name of nationalism and national self-interest. A number of Indian neo-conservatives already circle the skies of the Ministry of External Affairs, eager to push the discredited agenda of neo-conservatism and hard-boiled military driven idealism into practice. They will push for an entente with China on the disputed border, it will create a new relationship with Japan that will create anxiety in Beijing; it will make linkages with Israel that will both aggravate the Gulf Arabs (from where India relies upon oil) but prevent them from doing much as a penalty. It will not be a good time to be a diplomat from India.