Who Needs the Supreme Court?

Gay marriage might just become the law of the land without ever heading back to Justice Kennedy. 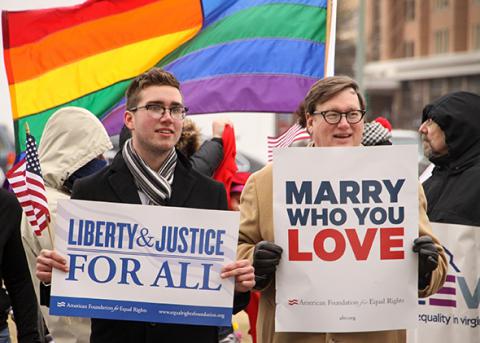 ,
A judge just struck down Pennsylvania’s gay marriage ban. You could be forgiven for yawning. This is the third marriage equality ruling just this week (welcome to the party, Oregon and Utah), and the 18th straight win in the courts in less than a year.
The unbroken string of victories dates from the Supreme Court’s ruling last June in United States v. Windsor, striking down part of the Defense of Marriage Act as unconstitutional. Does that make this series of rulings predictable? That’s what Justice Antonin Scalia wrote in dissent last year, warning that Windsor would actually nationalize gay marriage. But it’s not what the majority opinion by Justice Anthony Kennedy said. Windsor wasn’t a full stride—it was a baby two-step, partly sidling up to the notion of marriage equality and partly relying on the power of states to determine marriage laws for themselves. What’s amazing is that so far, all the courts have followed the equality move, and the momentum raises a question no one would have dreamed of a year ago: Will gay marriage become the law of the land without the Supreme Court doing anything more?
Here’s the map and the math (with thanks to my colleague Mark Stern, who had this at his fingertips):
That’s 10 states, without help from judges. This reflects the smartest tactic of the gay-rights movement, which prioritized winning at the ballot box over winning big in the courts, since persuading voters means changing hearts and minds.
Add it all up, including Pennsylvania, and we’ve arrived at 29 states where same-sex marriage is legal or on its way there unless an appeals court blocks it—past the halfway point and far past the tipping point. (Yes, 32 states still have laws or constitutional amendments on the books that deny marriage equality to same-sex couples. But those are the laws that are toppling like a line of dominoes.)
We’ve arrived here so much faster and more agreeably than anyone could have predicted even a year ago, when the challenges post-Windsor looked like they would split the district courts, take their time wending their way through the appellate process, and maybe arrive back at the Supreme Court in, say, 2017, safely after the next election. Instead, no judge wants to write the opinion denying the benefit of marriage. Judge John Jones of federal district court in Pennsylvania, who issued today’s ruling, was endorsed by none other than Rick Santorum, beloved of the religious right. Judges aren’t supposed to rule by the polls, but that doesn’t mean they’re unaffected by the rising tide of public support, especially among young people. As Northwestern University law professor Andrew M. Koppelman said to Adam Liptak in the New York Times: “It is becoming increasingly clear to judges that if they rule against same-sex marriage their grandchildren will regard them as bigots.”
It’s still possible, and I suppose probable, that somewhere in the country a judge will take that risk. Last week in Richmond, Virginia, three judges from the U.S. Court of Appeals for the 4th Circuit heard arguments in the constitutional challenge to Virginia’s gay marriage ban, enacted as an amendment to the state constitution in 2006 and struck down in February by Judge Arenda L. Wright Allen. (If you’re trying to keep track, Virginia is one of the seven states with pending appeals that I mentioned earlier.) As Dahlia Lithwick pointed out, Judge Paul V. Niemeyer (a George H.W. Bush appointee) channeled the states’ rights half of Windsor. It wasn’t clear in Richmond whether Niemeyer has a second vote on the appellate panel of three. Even if he does, if the case then moves to the whole 4th Circuit, would a majority of its 15 judges fall into conservative line? Six are Obama appointees and four were appointed by Bill Clinton.
I’ve been looking to a different appeals court, the 5th Circuit, for an anti-gay marriage ruling. That court will hear the appeal of the ruling that struck down the gay-marriage ban in Texas. It tilts reliably right, with 10 Republican appointees and four Democratic ones. If the 5th Circuit upholds the Texas law, then it will create a split among the federal courts. That would put us on the expected path back up to the Supreme Court. Surely Justice Kennedy will be waiting with open arms to finish what he started in Windsor. But maybe he just won’t get his chance. In the end, who really wants to be the judge who stood on the wrong side of history?
Emily Bazelon is a Slate senior editor and the Truman Capote Fellow at Yale Law School. She is the author of Sticks and Stones.