The Tabloid Shaming of Chirlane McCray Ignores the Realities of Motherhood

The big bad thing she confessed to was… ambivalence. Ambivalence about the early days of motherhood. Sideswiped by the consuming reality of parenting, she admitted that she often wanted to escape; she didn’t want to spend every round-the-clock moment with her new child; she wanted to work! 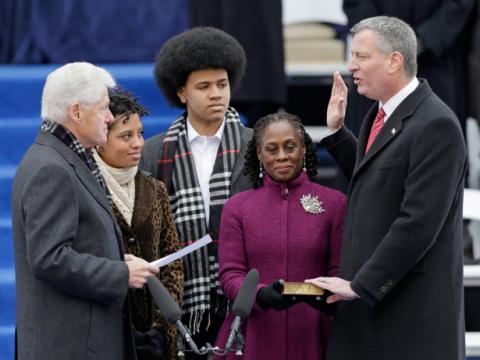 It’s been a rough few days for one of New York’s most powerful women—and no, we’re not talking about Jill Abramson.

This past Monday morning, the New York Daily News and New York Post—the frat brothers of the New York journalism scene—published simultaneous front-page attacks on Chirlane McCray. McCray is the wife of New York’s new mayor, Bill de Blasio, and a staunchly progressive African-American feminist, poet and former speechwriter with a defining presence in her husband’s administration. She is also the subject of a fascinating profile in this week’s New York magazine in which the author, Lisa Milller, hails her as an “unambiguous asset” to her husband’s administration. So naturally the tabloids took out their hatchets.

“I was a bad mom!” shouted the cover of Rupert Murdoch’s Post next to a full-page photo of McCray. The headline was allegedly inspired by comments McCray made in the New York profile and was accompanied by an article which began: “In an astonishing confession, New York City First Lady Chirlane McCray has revealed that she was a neglectful mother after her daughter, Chiara, was born.” Next to that, there was a picture of the victim, Chiara, herself, whom the paper helpfully reminded readers “dropped her own bombshell last year about abusing alcohol and marijuana.” Were the mother’s early neglect and daughter’s drug use connected? the reader was clearly meant to ask.

The Daily News, ever the wingman to the wilder Post, opted for a more sober approach. In a framed teaser at the top of its front page, it served up a pained-looking picture of McCray, accompanied by the headline, “Didn’t want to be a mom.” And then, beneath that, playing at empathy: “Chirlane’s sorrow.”

Poor Chirlane McCray. What on earth could she have done that was so outrageous the Post surmised it would “horrify most moms”? Abandon her babies for a life of repetitive chanting and saffron robes in a desert cult? Soak away her days in a Calgon haze while her kids, left to fend for themselves, trapped possums in their Park Slope yard? Clearly it must have been pretty bad to warrant such hyperventilating.

And yet: as even a quick glance at the relevant section of the New York profile reveals, McCray’s offense wasn’t quite so dramatic. The big bad thing she confessed to was… ambivalence. Ambivalence about the early days of motherhood. Sideswiped by the consuming reality of parenting, she admitted that she often wanted to escape; she didn’t want to spend every round-the-clock moment with her new child; she wanted to work! As she explained in the quote that sent the tabloids into a tizzy:

“I was 40 years old. I had a life. Especially with Chiara—will we feel guilt forever more? Of course, yes. But the truth is, I could not spend every day with her. I didn’t want to do that. I looked for all kinds of reasons not to do it. I love her. I have thousands of photos of her—every 1-month birthday, 2-month birthday. But I’ve been working since I was 14, and that part of me is me. It took a long time for me to get into ‘I’m taking care of kids,’ and what that means.”

If this doesn’t sound exactly like monster-mother material, it’s because it’s not. As Jennifer Senior wisely observed in a piece dissecting the two tabloid takedowns, women have been rubbing up against the stress and ambivalence of motherhood for decades, perhaps forever. For one thing, being a mother doesn’t always come naturally, in a great gush of wisdom and selfless love the moment the baby is pulled from the birth canal or brought home from the adoption agency. Being a mother—like being any parent—is a process of becoming, and as much as the parenting gurus and attachment warriors try to sell you on the uncomplicated oneness of it all, more and more women are embracing the mangled, tangled messiness of the reality. Just ask my good friend (and sometime co-conspirator) the Beta Parent.

And yet, by the transitive property of tabloid sexism, ambivalence equals bad mother equals equals daughter who drops “bombshells” about abusing pot and alcohol. The Post even took an obligatory swipe at McCray for having been “an outspoken lesbian activist,” and revealed that—gasp—she was pregnant two months before she wed. Maybe we should all just wear our poodle skirts to the sock hop and be done with this.

The added insult of the whole thing is that the McCray seems to be, and have been, a decidedly dedicated mother. More to the point, the profile isn’t actually about her mothering—or her philosophy of mothering. The paragraph the tabloids cite consumes just 101 words of a nearly 6,000-word profile. It’s a fragment of a sprawling whole which covers everything from her solitary childhood in puritan Massachusetts to her self-discovery as a black queer feminist in the 1970s to her marriage to de Blasio in the mid-1990s to her newfound role as the “conscience” of his administration. Thanks to her insistence, we learn, the new administration has gathered together “the most diverse leadership team New York City [has] ever seen,” including six women out of a total twelve positions and only three white men.

Yet there McCray is, on newsstands across the city, reduced to a character from the mommy wars.

This is all the more irritating given that McCray’s particular brand of feminism—which does get a lot of ink in the profile—doesn’t seem to be all that interested in mommy politics. The ongoing, decades-old debates over going to work or staying home, leaning in or leaning out, having it all or having it some, don’t seem to move her all that deeply. “For McCray, feminism is not so much about the fulfillment of personal ambition as it is about helping women to get the basic things they need,” writes Miller.

Perhaps it’s too much to ask the tabloids to parse such intricacies. Perhaps it’s too ambitious to expect them to time-warp themselves close enough to the twenty-first century to recognize that you don’t score political points by shaming a working mother—or any mother. Either way, turning an honest confession of ambivalence into an admission of “bad” parenting isn’t actually a “gotcha” moment. It’s just bad journalism.

Lizzy Ratner is a contributing editor at The Nation, where she oversees the Cities Rising series. She is also the author, along with Jen Nessel, of Goodnight Nanny-Cam: A Parody for Modern Parents (Plume).