Rightwing parties in Latin America give themselves populist names, keep the manifesto rhetoric modest and talk of appealing to the street. But they aren’t winning many votes. Meanwhile business is learning to work with governments of the left. 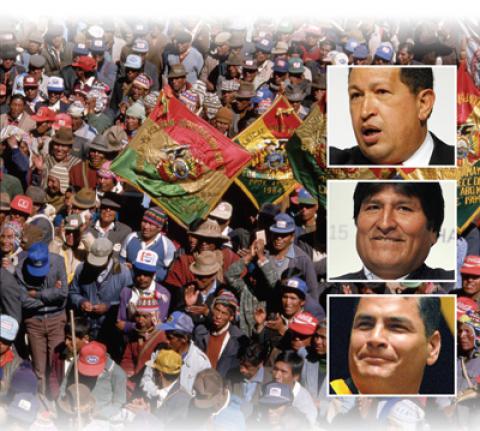 “There are no conservative parties in Brazil,” claimed the magazine Veja in April. In a country where a centre-left Workers’ Party (Partido dos Trabalhadores; PT) government has taken 40 million people out of poverty, none of Brazil’s 27 parties identify themselves as rightwing. Even the most reactionary have progressive-sounding names such as “the Democrats.” Brazil is not unique. Across Latin America, the rightwing parties that dominated in the 1990s are in disarray, struggling to develop a coherent electoral alternative to popular leftwing governments. A glance at the polls for this year’s elections suggests we should really be asking if the right has disappeared in Latin America.

A few bastions remain, such as Panama (where the centre-right Juan Carlos Varela was elected president on 5 May) and Colombia (where the right or centre-right candidates stand to win the 25 May election)— which, with Mexico, have most resisted the “pink tide.” But five of the seven presidential elections in Latin America this year are likely to go to the left or centre-left. In March the former guerrilla movement FMLN won in El Salvador, and in April the Citizens’ Action Party secured victory in Costa Rica. Bolivia, Uruguay and Brazil are expected to follow suit. Last year there were landslides for the left in Chile and Ecuador.

The neoliberal right is tainted by its record of economic crises, unemployment and hardship going back to the 1990s, and many conservatives are still associated with the military dictatorships of the 1970s and 80s. Reduced economic dependence on the United States, which has historically supported rightwing elites (from the Somoza dynasty in Nicaragua to the Chilean dictator Augusto Pinochet), and the creation of new regional organisations that exclude the United States, such as the Union of South American Nations (UNASUR), have made it harder for rightwing parties to make headway.

A big problem for the right is how to create a successful alternative to the popular policies of the leftwing governments. Progressive governments have been using the proceeds of economic growth to fund generous social programmes that have cut poverty dramatically. This has forced rightwing parties to move to the centre, pledging to continue poverty alleviation programmes or, in the case of Brazil’s main opposition candidate Aécio Neves, extend them further. The leader of the “moderate” section of the Venezuelan opposition, Henrique Capriles, in a recent interview in Le Monde, tried to sound even more leftwing than the ruling Socialist Chavistas, accusing the government of “becoming bourgeois” and claiming that President Nicolás Maduro, unlike his predecessor Hugo Chávez, never leaves the presidential palace. He said: “It’s not enough to appeal to the middle class, we must also be able to articulate the aspirations of the poor. And to do that, we need to start from the shantytowns.” Tucked away in the manifestos of both Capriles and Neves are promises to make public services more “efficient” through privatisation, but their tone is moderate.

By adopting a conciliatory approach and focusing on basic issues such as economy and crime, the Capriles coalition, Mesa de la Unidad Democrática, hoped to defeat Chavismo. Though it did not succeed, it came within 1.5% of victory in the presidential election after Chávez’s death in March 2013. Since the opposition’s poor results in last December’s municipal elections, more radical leaders have arisen, who are trying to oust the elected president through street demonstrations and violent direct action, a strategy known as la salida (the exit).

Business elites have learned to work with leftwing governments, which has led to a separation of business and political opposition, and means that rightwing parties have lost their most important backers. Evo Morales, Bolivia’s indigenous activist president, faced in his early years a revolt by powerful landowners who control vast soya and sunflower plantations in the province of Santa Cruz. But opposition from agribusiness has recently subsided as landowners discovered that Morales, despite his radical rhetoric, has run a balanced budget, offered tax subsidies to agro-exporters and, crucially, has not carried out land reform in the rich eastern lowlands. (Instead, he has expropriated unproductive estates in northern areas). Bolivia’s rightwing parties are likely to get less than a third of the vote in this year’s presidential election.

In Peru, the powerful business elite, based on the mining of gold, copper, coal and iron ore, has been content with Ollanta Humala’s neoliberal fiscal policies and promotion of new mining projects, while Ecuador’s president, the leftwing economist Rafael Correa, elected in 2006, has astutely kept the middle class on board by providing political stability, economic growth, new road-building projects and fiscal conservatism.

The business elite in Brazil has also been satisfied with the PT’s policies, which have promoted economic growth, raised living standards, increased consumption and expanded the domestic market for Brazilian businesses (during the 2000s, 42 million people opened bank accounts, and 15 million flew for the first time), without fundamentally threatening the unequal social structure. Yet the PT has limited room for manoeuvre, because in Congress it is dependent on the right — its main coalition partner is the PMDB (Partido do Movimento Democrático Brasileiro; Brazilian Democratic Movement Party), which includes representatives of the agribusiness sector.

The PT’s success has left Neves struggling to define a clear alternative path. Neves belongs to the PSDB (Partido da Social Democracia Brasileira; Brazilian Social Democracy Party), a middle-class group that grew out of opposition to the military dictatorship but adopted neoliberalism. The one big difference between the parties is on foreign policy: The PSDB has been critical of Brazil’s closeness to Venezuela and the decision to form an autonomous regional bloc, especially through UNASUR.

Although Dilma Rousseff’s PT is leading in the polls, sluggish economic growth and lower- and middle-class demands for improved public services and less spending on this summer’s World Cup or the 2016 Olympics, could provide opportunities for Neves. This reveals a weakness of the left’s model across Latin America: it relies on rapid economic growth through high prices for commodities (oil, soya, copper, gas) rather than economic diversification or structural reform, which could threaten powerful elites. This shows that, with political will, governments can improve the lives of their poorest citizens — an important lesson for austerity-stricken Europe. But it also shows the limits of a strategy that remains vulnerable to fluctuations in commodity prices.

In Chile, the model may be exhausted. The concept of neoliberal economics combined with social programmes was invented by the Concertación, Chile’s centre-left coalition, which governed for 20 years after the fall of Pinochet in 1990. The outgoing president, independent billionaire businessman Sebastián Piñera, whose economic policies were not notably different from those of the Concertación, faced demonstrations by students against private education and economic inequality. Yet his policies led Hernán Büchi (finance minister under Pinochet) to complain about tax rises and obstacles to investment “to protect the environment,” and the continuation of “welfare measures aimed at workers that impinge on personal liberties,” adding, “We do not need to behave like a shamefaced right.”

Socialist Michelle Bachelet pledged free university education funded by corporate taxation and a reform of Pinochet’s constitution on her election in December 2013, and her second term promises to be more to the left than her first (2006-10). After a disastrous election showing, the two main rightwing parties suffered defections, and there is talk of a new centre-right party being formed around Piñera. But Bachelet’s radical agenda could unite the right by provoking hardline Pinochetistas and neoliberals.

Chile and Brazil are often seen as the moderate end of the “pink tide.” Brazil has played a crucial role geopolitically, strengthening new regional organisations and pushing continental politics to the left. But this has also helped homogenise some policies by encouraging members of regional organisations to find common ground. Olivier Dabène, a professor at Sciences Po in Paris, pointed out in 2012 that CELAC (Community of Latin American and Caribbean States) is led by a troika — the country that holds the presidency, its predecessor and its successor elect (Venezuela, Chile and Cuba at the time): “This strange trio do not seem to be experiencing any particular difficulties in working together. ... This illustrates the (relatively new) ability of Latin American countries to set aside political differences in the interests of pursuing the common good. The fashion is for pragmatism and flexibility, which constitutes progress on regionalism in the Latin American and Caribbean region.”

As Colombia’s president Juan Manuel Santos — from one of the most influential families of the Bogotá elite — understands, ideological rigidity can be an obstacle to trade. His efforts to renew ties with Venezuela have boosted bilateral trade, which had plummeted because of Álvaro Uribe’s aggressive stance against Venezuela, from $2.6bn in 2008 to less than $800m in 2010, with a major loss of income for the Colombian bourgeoisie.

Unlike Uribe, an outspoken hardliner who led a US-funded military offensive against the FARC guerrillas, Santos is a sophisticated operator who has charmed European liberals by calling for the legalisation of marijuana. He understands that social reform is needed to undercut support for the guerrillas. In 2011 he pushed through a law to give land back to displaced peasants and launched peace talks with the FARC. His difficulty is that many local landowners, and their paramilitary allies, are opposed to any redistribution of land.

Santos also recognises that Uribe’s pro-US stance left Colombia isolated in Latin America, and has tried to build bridges with Asia and with his Latin American neighbours. In 2012 Colombia, Mexico, Peru and Chile formed the Pacific Alliance, a trade bloc that aims to take advantage of their coastline to increase trade with Asia, and that promotes itself as a “free-market” alternative to the trade bloc Mercosur, which it sees as too protectionist.

The picture on socio-cultural issues is more mixed, and the difference between left and right is blurred. Governments of both the left (Uruguay, Argentina, Brazil) and the right (Mexico, Colombia) have approved gay civil partnerships, despite criticism from the Church and conservative sectors of society. In Chile, Bachelet backed Sebastián Piñera’s civil partnership bill against opposition from the allies of the Independent Democratic Union (UDI; formerly close to Pinochet).

On women’s reproductive rights, many on both the left and right take a very hard line. President Correa of Ecuador recently threatened to resign if the national assembly decriminalises abortion, which is allowed only when the mother’s life is in danger, or when a mentally handicapped woman has been raped. In Nicaragua, Sandinista Daniel Ortega has backed an all-out ban on abortion. Except in Cuba, Uruguay and Mexico, abortion is severely restricted in Latin America, and the progressives are making little headway. In Brazil’s 2010 presidential election the main candidates, Dilma Rousseff and José Serra, who had both previously supported abortion, came out against it to court the Catholic vote.

This does not mean that left and right are now indistinguishable. The relative dominance of social issues, which the left is working to establish, has forced experimentation on the elements of the right that want to turn over a new leaf. But there is nothing to suggest that the experiments constitute an ideological revolution or are anything more than strategic manoeuvres. As evidenced by many coup attempts, successful (Honduras in 2009, Paraguay in 2012) and unsuccessful (Venezuela in 2002, Bolivia in 2008, Ecuador in 2010), it would be a mistake to think the authoritarian old right has given up.

Grace Livingstone is the author of America’s Backyard: The United States and Latin America from the Monroe Doctrine to the War on Terror, Zed Books, London, 2009.