TTIP does away with “barriers” that impede the intercontinental flow of goods. This will make it easier for companies to base their production facilities on “cost” grounds, especially social ones. Workers’ entitlement to be involved will still stop at the border. TTIP will therefore mean a weakening of workers’ rights, despite guarantees under the EU’s Charter of Fundamental Rights. 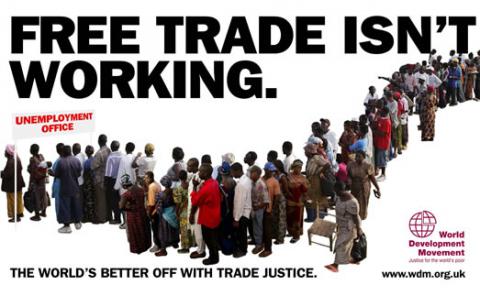 The US has ratified only two out of eight basic International Labour Organization conventions designed to protect workers. All EU member states meanwhile have adopted them. History suggests that free trade treaties tend to lead to “harmonisation” around the lowest common denominator. European workers’ fears that their current rights will be eroded are not misplaced.

The logic of TTIP is to do away with “barriers” that impede the intercontinental flow of goods. This will make it easier for companies to choose where they base their production facilities on “cost” grounds, especially social ones. Workers’ entitlement to be involved — including such things as the right to information and the right of works councils to be consulted — will still stop at the border. TTIP will therefore mean a weakening of workers’ rights, despite guarantees under the EU’s Charter of Fundamental Rights.

3. Relaxation of technical norms and standards

Here, the European and American approaches to standardisation are markedly different. In Europe, the precautionary principle applies: the release of a product onto the market depends on prior evaluation of the risks it may present. The US does it the other way round: the evaluation happens retrospectively and is accompanied by a guarantee of responsibility for any problems following the product’s release (the possibility of class actions, financial compensation). What’s more, in Europe, risk assessment is not confined to consumers. It includes evaluation of working conditions, and health and safety (even if these are not always respected). The US does not take these into consideration at all.

This form of harmonisation so appealing to employers brings multiple dangers: the weakening of the precautionary principle (without retrospective responsibility); the possible emergence of a dual system in which businesses can choose which norms they follow; and the reduction of workplace protection for employees. The prospect of a transatlantic Regulatory Cooperation Council being created, which would be largely free of democratic control and oversight by trade unions, is unsettling.

4. Restrictions on the free movement of people

The movement of people is only considered in the context of the World Trade Organization’s so-called “Mode 4” service delivery, in other words “the presence of persons of one WTO member in the territory of another for the purpose of providing the service”. This provision is also referred to as the “posting of workers”, which will contribute to “social dumping” in the EU.

In the current negotiations, mobility and migration only figure in the context of economic interest; there is no fundamental right to free movement. This despite the fact that it would have been possible to imagine a harmonisation of laws and employment legislation permitting people to benefit from the same freedoms and guarantees as goods and capital.

5. Absence of sanctions against abuse

Free trade treaties traditionally include a “sustainable development” chapter, which brings together measures that relate to social and employment law, and environmental protection (including climate, fauna and the rural environment). Unlike other chapters, these largely fail to stipulate any conflict resolution mechanism or specify possible sanctions in the event of violations. Whereas the articles dealing with economic and technical domains are characterised by very precise legal provisions and the option of sanctions, those concerning social law are vague and any sanctions mentioned have little chance of being legally applied.

6. The progressive disappearance of public services

The negotiations are orientated towards increasing public service privatisation by a technique known as the “negative list”. This means specifying which public services are not open to privatisation, the corollary being that those not listed are up for grabs. Here too, experience suggests that problems of definition pave the way for privatisations that extend beyond what is initially foreseen. In addition, any service developed to meet new needs would be considered to belong to the private sector automatically.

Within the EU, non-European businesses may profit from public markets. This will be much less the case in the US, where rules aimed at guaranteeing a minimum of “local content” are widespread. As a result, there will be an enlargement of markets open to US businesses, without any compensatory advantage for their European counterparts, with detrimental consequences for EU employment.

8. Loss of confidentiality of personal data

Europeans have traditionally been keen on personal data protection. US regulations suggest less American concern about people beyond their borders. With liberalised service provision, guarantees in any case become hypothetical: it is hard to determine the place of storage and the appropriate jurisdiction when data is cloud-based.

A concerted effort by European trade unions and political and other organisations successfully quashed this during the debate over the Anti-Counterfeiting Trade Agreement (ACTA), but there’s a risk of it returning to the table with TTIP. Intellectual and industrial property rights protections are currently under negotiation and could threaten the freedom of the Internet, deprive authors of freedom of choice over the distribution of their works, and even limit access to generic medicines.

10. Subordination of states to laws tailor-made for multinationals