The unions have for years been telling the government, let’s address this, and offering an alternative plan. But workers’ attempts to have fruitful dialogue with the administration are not having any results. 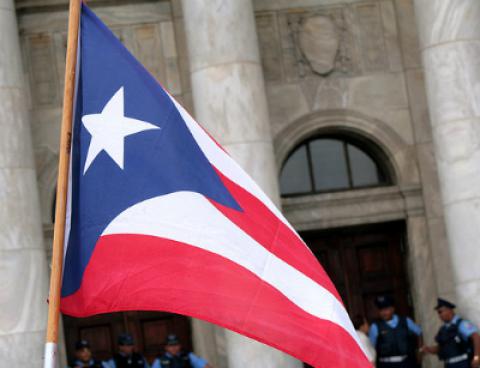 Union workers in Puerto Rico are resisting a crippling budget proposal. , In These Times

Public union workers from a handful of unions across Puerto Rico have spent the last week blocking ports, shutting down thoroughfares and slowing public transit. But that may be just the beginning: In the coming week, workers are expected to vote on whether to hold a general strike across the country.

The unions are standing against the austerity budget proposed this spring by members of the U.S. commonwealth’s General Assembly to deal with the country’s recent bond downgrade and looming payment of its debts to bondholders. The Fiscal Sustainability Act of the Government of the Commonwealth of Puerto Rico, as the budget is called, would allow the government to bring in “emergency powers” to deal with the crisis. Under this authority, it could renegotiate all public employees’ contracts, liquidate unused sick days, and freeze salaries—thereby gutting workers’ collective bargaining powers. Privatizing the commonwealth’s electrical company, the Puerto Rico Electric Power Authority, has also been placed on the table as an option for stanching the crisis; the emergency measures would also include closing 100 public schools.

The budget must be passed on June 30 to coincide with the beginning of the 2015 fiscal year on July 1. And as that deadline nears, unions across the island have been escalating their protests. On June 5, the union of transportation employees prevented ferries around the country from functioning. That same day, workers from the bus and port authorities, as well as the state insurance funds, blocked the entrance to the central government building in San Juan. Amid the disruptions, the labor secretary said at a council meeting he would not speculate as to whether the actions already constituted a general strike, or were just a series of protests.

Nora Vargas-Acosta, a labor lawyer in Puerto Rico who represents several of the unions who would be affected by the bill, including healthcare workers and correctional facility workers, says that although the fiscal crisis is certainly real, its effects shouldn’t be wholly shouldered by workers. “The way the government wants to address the economic crisis is falling on the right of workers,” she says. “From my perspective, it is right that the unions feel that it should not be this way. There are some costs but the government does not want them to bear equally on all.”

In February, several credit rating services, including Moody’s Investor Service and S&P, brought Puerto Rico’s bond rate down to “junk” status. But the alarm bells set off by the rating are only the latest signs of trouble for the island, considering the strong hold financial markets from the United States have on Puerto Rico. The country is in its eighth year of recession, with more than $70 billion in public debt held largely by U.S.-based investors.

Blame for much of this crisis has been laid at the doorstep of the United States, which has held Puerto Rico as a territory for 115 years. In 2006, the U.S. Congress did away with the island’s main economic development strategy—federal tax credits for companies who made profits in Puerto Rico—which caused many Puerto Rico-based companies to flee to other tax havens such as the Cayman Islands and the Netherlands. In recent years, the island has again begun wooing the super-rich from the United States, with a handful of millionaires already taking up its offer of low taxes and warm weather.

On the ground, the nation of 3.7 million people has a 15.4 percent unemployment rate; government pensions are underfunded by $37 billion. These problems have prompted an exodus of people to the United States, with more than 35,000 people leaving between April 2010 and July 2011 alone, several years into Puerto Rico’s recession. The economy is dominated by manufacturing, finance and public sector jobs, but the government is the island’s largest employer—meaning that its workers are the most liable to suffer from public cutbacks. Puerto Rico’s constitution goes so far as to legally stipulate bonds will be paid off even before government paychecks.

And the Fiscal Sustainability law isn’t the first time the government has put its employees on the line to deal with its financial problems. In October 2009, then-Gov. Luis Fortuño’s firing of 17,000 workers, ostensibly to avoid an immediate government shutdown caused by the fiscal crisis, had already set off protests from public workers as well as political parties and community organizations, all of which culminated in a general strike. Despite the unrest, Public Law 7, passed in March 2010, gave Fortuño’s conservative administration the leeway to suspend union contracts and dismiss even more public sector workers without due process rights laid out in their contracts.

Despite the similarities of Law 7 to the fiscal sustainability law, current governor Alejandro García Padilla has taken steps to publicly separate the two measures. Padilla, whose party criticized Law 7 when it was initially introduced and has said its effects have been negative, defended his party’s fiscal sustainability law by saying it won’t create layoffs in the public workforce. Still, unions regard the budget as yet another way to leach civil employees of their rights.

Vargas-Acosta doesn’t deny that there are troubles within the labor organizations themselves, such as corruption and unions who work closely with the administration. But, she says, unions have helped provide public workers with a good standard of living, one she would like to see shared by all workers in the country. “The things that you are hearing from the government is ‘look how many rights they have, look how well they are doing,’” she says, referring to the government’s implication that the public sector is the place to trim the fat. “This means unions are in fact doing their jobs and doing it well.”

As rumors of a nationwide public workers’ strike swirl, Vargas-Acosta says unions have put forward their own suggestions for how to fix the crisis. Among the proposals are suggestions that state agencies should minimize their number of outside contractors, which they heavily rely on or, as the head of the electrical workers’ union has suggested, place a moratorium on debt payments. With debt payments expected to total $18.35 billion through 2018, according to estimates from Moody’s Investors Service, and the aforementioned constitutional clause promising the payment of debt services, its unclear how likely these plans are to gain traction.

“The unions have for years been telling the government, let’s address this, and offering an alternative plan,” she said. “But workers’ attempts to have fruitful dialogue with the administration are not having any results.”

Yana Kunichoff is a Chicago-based journalist covering immigration, labor, housing and social movements. Her work has appeared in the Chicago Reporter, Truthout and the American Independent, among others. She can be reached at yanakunichoff at gmail.com.