Dispatches From Brazil's World Cup: 'No One Lives Here Anymore'

Two middle-aged men, former residents of Favelo do Metro, sat around a plastic table between the sidewalk and a demolished home. We asked them why the city would hastily evict this community, only to leave wreckage behind: “They didn’t give us a reason why we had to leave. They just came, pushed us out, and knocked the buildings down. Brazil spends and spends on ‘the future.’ Meanwhile, there’s nothing for the people of today.” 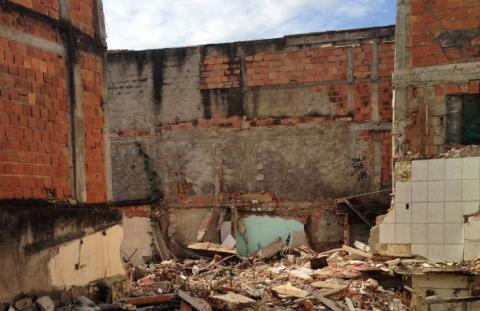 This was once someone’s home in Favela do Metro, five minutes from Maracanã Stadium. June 13, 2014., Photo by the author

Favela do Metro was once a community of 700 families living a five-minute walk—just up the Rua São Francisco Xavier—from Rio’s legendary Maracanã Stadium. Now it’s a couple of storefronts and a tonnage of rubble. All of the 700 families are gone, uprooted by a World Cup agenda that looked at their homes and envisioned parking lots for the Maracanã. Even that was too much for city planners, as the parking lot has yet to be built, with the World Cup already underway. Perhaps it will be ready for cars by the start of Rio’s 2016 Olympics. When I asked one of the former favela residents, hanging around a food stand, to explain the delays, he said, “If they can’t finish the World Cup stadiums, do you really think they care about this place?”

Instead, all around are empty lots—case studies in demolition, with the jagged remnants of what were once people’s homes there for all to see. There are dolls with missing heads and limbs, couches without cushions and razor-sharp exposed springs, and a sink leaning precariously on a mountain of wood shavings. The owners’ memories have become someone else’s garbage. On one wall is spray-painted, “What happened to the families? No one lives here anymore.”

Theresa Williamson of the NGO Catalytic Communities, providing translation, told me the story of what happened to the favela’s former residents. The first 100 families evicted by the city—in November 2010, just after the 2016 Olympics were awarded to Rio—were forced out in a chaotic rush. Without any time to consider their options or organize any kind of collective response, they were shuttled out at gunpoint, and resettled in Rio’s far west zone, two hours away from their former homes. It was a violent eviction, and the first to gain any kind of international media visibility.

The 600 remaining families then started organizing. They sued the city. They protested. They forced the city government to grant them public housing within a few minutes of Favelo do Metro so the disruption to their lives would be as minimal as possible. As Williamson said, “This is an example of what happens when you resist eviction—the more you resist, the better the outcome.”

Still, this was a painful process that took three years to play out, and those three years were ugly as sin. With hundreds of residents still living in Favelo do Metro, the city began to unceremoniously knock down homes and leave behind low hills of trash. Rats infested the area. Drug traffickers found new homes in the empty lots. The city claimed it needed to develop the area for the games—instead, it brought blight.

Two middle-aged men, former residents of Favelo do Metro, sat around a plastic table between the sidewalk and a demolished home. We asked them why the city would hastily evict this community, only to leave wreckage behind: “They didn’t give us a reason why we had to leave. They just came, pushed us out, and knocked the buildings down. Brazil spends and spends on ‘the future.’ Meanwhile, there’s nothing for the people of today.”

I was also able to speak with Eomar Freitas, another former resident of Favela do Metro. His was the last home standing. He still has a storefront where he sells drinks and food. “I’ve lost over 90 percent of my business, but I refuse to leave,” he said. “If I live elsewhere, the mayor wins.” The mayor of Rio, Eduardo Paes, is seen by Freitas to be as much—or more—of a culprit when it comes to the false promises of new homes that accompanied the destruction of Favela do Metro. “The mayor’s mouth is like a baby’s ass. Nothing but shit.” Eomar says the new housing the residents won is serviceable but smaller and of a lower quality than their former homes. For example, hanging photos on the wall is impossible, because the walls are so brittle that they won’t hold a nail.

In the lot right next to Eomar’s storefront are several hundred workers clearing out the rubble for the purpose of paving it with cement asphalt for a parking lot. We speak to the workers there, all of whom live in favelas of their own. They are also in a construction workers’ union. You can only wonder why displacing and destroying the homes of other working-class people is union work. One of the people with me, a favela organizer, is actually recognized by one of the workers from a demonstration at another favela he was destroying. She asked him, as a favelado, how it made him feel to tear down these homes. “It makes me feel strange and disturbed in my heart,” was his answer, using a word in Brazilian-Portuguese that doesn’t have an exact English parallel.

This is the other Rio, a place of real estate speculation and mega events for foreign consumption. It’s a place that loves soccer, but hates how it’s being used and has no patience for treating this moment as World Cup business as usual.

As Eomar said to me, “Look around my store. You’ll see posters of [Argentina’s] Lionel Messi and [Portugal’s] Cristian Ronaldo. No Brazil players. In yesterday’s game of Brazil vs. Croatia? I was rooting for Croatia.”

For background on Brazil and the World Cup, check out Dave Zirin’s new book, Brazil’s Dance with the Devil: The World Cup, The Olympics, and the Fight for Democracy.

Please support our journalism. Get a digital subscription to the Nation for just $9.50!