After Rana Plaza: Setting the Record Straight on the Bangladesh Safety Accord

The campaign for the Bangladesh Safety Accord, coordinated by United Students Against Sweatshops, that included two Bangladeshi worker tours, six sit-ins and countless direct actions across the country, 23 universities, including Penn State, UW-Madison, and NYU, have required their brands to sign the Accord, and 17 college-logo brands, including Adidas and Fruit of the Loom, have signed the agreement since September. 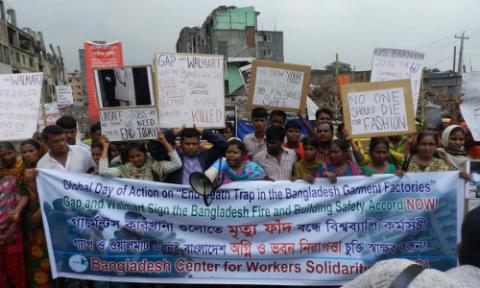 This year, United Students Against Sweatshops has been running a campaign to urge our universities to require their brands to sign the Bangladesh Safety Accord, a groundbreaking, legally-binding agreement between brands and unions that holds the promise of putting an end to mass fatalities in the Bangladeshi garment industry. As a result of two Bangladeshi worker tours, six sit-ins and countless direct actions across the country, 23 universities, including Penn State, UW-Madison, and NYU, have required their brands to sign the Accord, and 17 college-logo brands, including Adidas and Fruit of the Loom, have signed the agreement since September. Students and workers are celebrating these victories, and continuing with renewed energy in their campaign to force VF Corporation, owner of North Face and JanSport, to sign the Accord. As the implementation of the agreement is underway, the Accord has temporarily closed nineteen factories that were declared critically unsafe. That's nineteen potential Rana Plazas that have been prevented, with thousands of workers protected.

However, in recent weeks the Accord has received some criticism. Just this week, Jacobin released an article entitled "After Rana Plaza" written by Colin Long. In the article, Long reflects on his experience on a delegation to Bangladesh observing how workers in the Bangladeshi garment industry are faring one year after the Rana Plaza collapse. Long makes a number of important reflections. Most importantly, he contends that no international agreement between brands and unions can replace shop floor worker organizing; workers must form militant unions in Bangladesh if they're ever going to reverse sweatshop conditions throughout the country's garment industry. As an international solidarity organization, we agree. But, despite at times recognizing the significance of the Accord, Long makes a number of inaccurate statements about the agreement and its role in building the Bangladeshi labor movement.

For example, Long claims that "the accord's greatest flaw is that there is no provision for follow-up inspections to ensure that the required rectification and repairs have taken place. The accord, we were told by a young American woman working on its implementation, will rely on `worker voice', expressed through workplace committees, to ensure that employers have fixed their buildings." Unfortunately, this statement is completely false. In fact, there are follow-up inspections planned to ensure that the brands follow through on the "corrective action plans" detailing how factories will be fixed. The text of the Accord makes explicit mention of reports regarding "progress on remediation to date for all factories at which inspections have been completed." It appears that Long's only source for his claim is a lone Accord worker, who may or may not be involved in broader implementation discussions (they were not named, so it's impossible to tell).

Long writes "what the brave and committed organizers of real unions need is assistance to build the kind of worker power that can transform the position of Bangladeshi garment workers and tear the fabric of the international fashion industry once and for all" (emphasis added). It is unclear what Long means by "assistance." International solidarity organizations, like USAS, do not organize workers; our role is to take direction from grassroots unions to hold brands accountable for labor abuses, and to help provide workers and their unions with tools like the Accord to facilitate organizing efforts. This year, we were asked by our union partners in Bangladesh (National Garment Workers Federation, Bangladesh Garment & Industrial Workers Federation, Bangladesh Independent Garment Worker Union Federation, and the Bangladesh Center for Worker Solidarity) to join them in pressuring apparel corporations to sign the Accord because these unions, who are signatories to the Accord, view the agreement as a vital step forward for workers in Bangladesh. And because several brands producing in Bangladesh have contracts with U.S. universities, the Accord is a fight where USAS and workers have significant leverage to force brands to step up. In addition, anti-union violence is continuing in Bangladesh, and USAS is going to be working with these unions to urge brands to address anti-union firings and cases of harassment of union organizers.

Long also states that "it was often unclear whether much real organizing was going on at ground level [in Bangladesh]." Let us be clear: workers in Bangladesh are organizing and, in some cases, they're killed for it.  As of halfway through this year, 75 new unions have been registered, and dozens more are pending with the government. This is happening even in the face of immense anti-union violence. For example, just two weeks ago, a National Garment Workers Federation organizer was brutally tortured and beaten for organizing workers at a garment factory called Pioneer Knitwear. The Accord is primarily a worker safety agreement and was never intended to "fix" the ongoing anti-union repression in Bangladesh. It does, however, contain important provisions that can be useful as tools for unions to organize, such as giving unions access to factories, establishing legitimate workplace safety committees, and building worker centers in garment-heavy districts, all of which allow workers to organize to defend their right to a safe and dignified workplace. These are the tools that will be used to ensure that when new fire-safe doors are installed, management does not return to the old habit of locking them, as Long fears. However, no one has ever claimed that the Accord itself would end all anti-union violence at the heart of the Bangladeshi garment industry. That struggle must be constantly waged on the shop floor with the help of tools like the Accord.

In addition to the Jacobin article, the NYU Stern School of Business released a report in April that attempts to downplay the differences between the Accord and a separate initiative called the Alliance for Bangladeshi Worker Safety - a company-controlled, non-binding program that unions have repeatedly critiqued for its failure to meaningfully include workers and their unions, as well as its lack of any obligation for brands to help finance the repair and renovation of unsafe factories. In response, over 100 faculty members signed an open letter to the NYU Stern School lambasting the report, and two global unions  released a separate critique.

Here's an excerpt from the faculty letter:

"The authors attribute little significance to the fact that the Accord, unlike the Alliance, includes worker representatives (unions) as counterparties to the signatory brands, equating this with the fact that the Alliance, unlike the Accord, includes factory owners in its governance structure. This overlooks the seemingly obvious point that having worker representatives as parties to a factory safety agreement will tend to promote its rigorous enforcement, while having the factory owners involved in the governance of such a regime will tend to have the opposite effect. Failing to acknowledge that the absence of worker representatives as signatories to the Alliance agreement means leaving brands - and their chosen appointees - responsible for enforcing the agreement against other brands is indicative of the report's flawed analysis."

The Stern School released a reply attempting to exonerate their report, and faculty issued a counter-response pointing out how the School's reply validates the majority of the critiques originally raised in their open letter.

At the end of the day, it's important to remember that the Accord is the first time in the history of the modern garment industry that brands have agreed, under significant pressure, to sign a legally-binding agreement with unions to adjust their pricing structures and constrain their ability to shift production to anywhere they please. This is an amazing accomplishment. It's not a silver bullet - and has never been billed as one - but it does set a major precedent. If any brand, like VF Corporation, is willing to risk millions of dollars in university and other contracts in order to avoid signing this agreement, that is irrefutable evidence that the agreement represents a real advance for shifting the balance of power towards workers. Otherwise, why would the brands fight it?

We must also keep in mind that this is a generational struggle, one that existed long before Rana Plaza and will continue long after. Looking to the future, unions and students must work together to compel brands (the real employers of the garment industry) to sign more binding agreements with unions that cover other terms and conditions of factory work, including wages, health care, severance and freedom of association. The Accord is a monumental step in this fight, but it's a fight that will continue long past the Accord's implementation in order to guarantee other important provisions of a dignified workplace. Here at USAS, we would love to see a world where, instead of fighting each other over who has the magic bullet solution to sweatshops, folks recognize the incredible work that unions, labor rights organizations, and students have put into making the Accord a success. We are not, as Long suggests, just "concerned citizens in the rich world who may consider their work done once the accord process is under way and most companies have signed up." For the last seventeen years, we have fought in solidarity with unions around the world, and we will continue to do so until labor exploitation becomes the exception, rather that the global norm.