Viruses can control the levels of bacteria in the gut, to make sure that no one type gets the upper hand. Viruses could maintain the biodiversity within us. 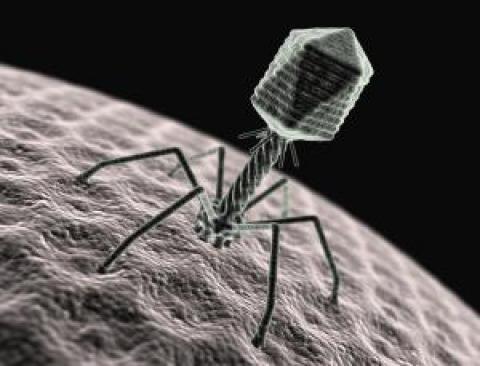 The new crAssphage is a type of bacteriophage, like this one, Getty Images/3DClinic

The common cold, hepatitis C… crAssphage? A new virus has been discovered that could lurk in the guts of almost three-quarters of people around the world, making it one of the most ubiquitous viruses you never knew you had.

The virus, which replicates by infecting a species of common gut bacteria, is six times more abundant than all other known gut viruses combined. Its discovery supports the idea that viruses may be the puppet masters of our intestines, regulating the teeming bacterial communities that call our gut home.

"The idea is that viruses can control the levels of bacteria in the gut, to make sure that no one type gets the upper hand," says Bas Dutilh of Radboud University Medical Centre in Nijmegen, the Netherlands. "Viruses could maintain the biodiversity within us."

The fact that the virus is found in so many different people, regardless of where they live or what they eat, overturns the previously held belief that each person's viral signature is unique, says Dutilh.

The idea that our viral cargoes – known collectively as the virome – vary from person to person came from a 2010 study that examined the similarities between the gut bacteria of twins. Using genomic data from faecal samples – a good proxy for inferring what's going on further up in the gut – from four sets of twins and their mothers, the study found that the resident gut bacteria among closely related individuals was far more similar than that between unrelated individuals. Viral communities, on the other hand, seemed to vary widely – even between the twins.

But there was a big caveat: only 19 per cent of the virome from the group matched anything from our databases of known viruses. The rest, says Dutilh, is a black box, both because of the vast numbers of unknown viruses out there and because of the rapid evolution of the viruses we do know. This is what he refers to as the realm of "biological dark matter". "The rest was ignored because we had no idea what they are or what they do," he says.

Dutilh and his collaborators at San Diego State University decided to dive back into the data to look at whether the study participants shared any of the viral dark matter. One virus – a type that colonises bacteria, called a bacteriophage – was present in samples from all 12 individuals.

When the researchers expanded their search to include all the data from the Human Microbiome Project, a large-scale project to sequence the DNA of all the microbes that live in and on our bodies, they found that the same virus was present in 73 per cent of all 466 human faecal samples. They gave their find the catchy name crAssphage after the DNA assembly software they used to discover it.

"We find it in samples from Europe, Asia and the US," says Dutilh. "One explanation is that it's been with us for many generations, spread with humankind over the world. But it's also possible that it's in some food that's eaten everywhere."

The team were able to show that crAssphage's most likely host is the bacterium Bacteroides, one of the most commonly found bacteria in our intestines. Bacteroides has been implicated in conditions such as obesity, diabetes and even colorectal cancer, suggesting that the virus may well have an impact on those conditions as well. But since viruses like crAssphage can exist within bacteria in many ways, it's not yet clear what role it plays.

Whatever it is, says Dutilh, it highlights the importance of the virome as a mechanism of control one level higher than bacterial communities. Further down the line, he says, this could be harnessed for personal phage therapy, where specially designed bacteriophages can be inserted into the gut to kill or boost certain bacterial populations that have gone awry.

"It has been a very short time since recent technological developments have allowed us to begin uncovering the huge diversity that the viral world contains," says Alejandro Reyes at Washington University in St Louis, Missouri, who was involved in the virome study on the twins. "Now the goal is to understand the role of those viruses in their microbial community, which, based on their abundance and diversity, must be an important one."

"The fact that the virome has been overlooked for 10 years is the elephant in the room in microbiome research," says Dutilh. "Most people just focus on bacteria, but there are also viruses and even fungi. It's the interaction between all of these things and the host gut that is really important."