Barzman wrote the 2003 autobiography "The Red and the Blacklist: The Intimate Memoir of a Hollywood Expatriate" and has been a leader in getting blacklisted writers' credits restored to films that were released with a "front" name. She'll be appearing at the Wilder theatre on her 94th birthday Sept. 15 for a screening of the 1946 drama "The Locket," for which she recently received writing credit. 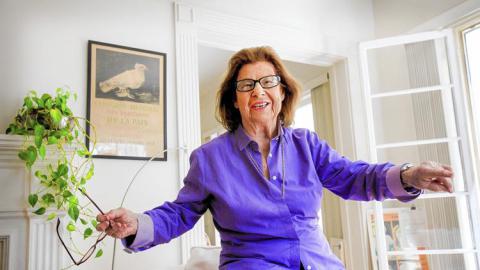 Screenwriter Norma Barzman at her home in Beverly Hills., Francine Orr, Los Angeles Times
Fear and betrayal swept through Hollywood after World War II when the House Un-American Activities Committee arrived to ferret out communists from the major studios.
HUAC was taking no prisoners. In 1947, the Hollywood 10 — directors, writers and producers who failed to cooperate with the committee when they were called to testify — were held in contempt. They were given a year's jail time and were blacklisted from the studios.
It was during the communist witch hunts that many progressive writers, actors, directors and producers under scrutiny decided to go into exile in hopes of continuing their careers. Some moved to Europe, including directors Jules Dassin and Joseph Losey, and screenwriters Ben and Norma Barzman. Others such as screenwriter Dalton Trumbo went to Mexico.
But even in Europe, the U.S government kept these exiles at close range. After obtaining her FBI files, Norma Barzman "discovered they followed us in Paris. We moved around a lot, and they knew every telephone number and every address. They knew everything we did from 1949 to 1954 until we bought our house in Paris." And to complicate matters, the U.S. Embassy took away her passport in 1951 for seven years.
Still, Norma Barzman flourished in Paris. Pablo Picasso, Yves Montand and Simone Signoret were among the couple's best friends. She wrote the screenplay to the 1953 Italian production "Finishing School" and episodes of "The Adventures of Robin Hood" while raising their seven children. Though her late husband wrote screenplays, he was depressed and bitter in exile.
"You would think those same things that buoyed me up would have given him a little lift," said the feisty 93-year-old great-grandmother in her cozy Beverly Hills apartment.
Most members of the American Communist Party in Hollywood had joined because they were progressives, and the party, which was fighting fascism and pivotal in the organization of guilds and unions in Hollywood, best fit their ideology.
Barzman, a member of the party from 1943 to '49, remains unapologetic about her involvement, saying "one should be proud to have been a member of the American Communist Party during those years. Hitler was invading the Soviet Union, so there was no reason to be anti-Russian, they were our allies."
Barzman will be talking about the blacklist as the opening-night guest July 25 at the UCLA Film & Television Archive retrospective "Hollywood Exiles in Europe" at the Billy Wilder Theater.
Among the films featured in the series are Jules Dassin's 1955 French film noir "Rififi" and two dramas written by Ben Barzman, 1950's "Christ in Concrete" and 1952's "Stranger on the Prowl."
"She is this wealth of knowledge," said the archive's Paul Malcolm of Barzman, who programmed the event with Rebecca Prime, author of "Hollywood Exiles in Europe."
"Her story with Ben is just so compelling," added Prime, who will also be a guest. "The courage they showed frankly to give up everything they gave up. They wanted to continue their careers. I feel like the determination that she showed in all aspects of her life left her undaunted."
Barzman wrote the 2003 autobiography "The Red and the Blacklist: The Intimate Memoir of a Hollywood Expatriate" and has been a leader in getting blacklisted writers' credits restored to films that were released with a "front" name. In fact, she'll be appearing at the Wilder on her 94th birthday Sept. 15 for a screening of the 1946 drama "The Locket," for which she recently received writing credit.
"Hollywood Exiles in Europe" opens with "Christ in Concrete," the first blacklist exile film. Hollywood 10 filmmaker Edward Dmytryk directed and blacklisted actor Sam Wanamaker starred.
"Christ in Concrete" won acclaim and prizes in Europe. Released as "Give Us This Day'" in England and the U.S., "it was only shown for two weeks in an all-night movie theater in New York," said Barzman.
It was Dmytryk who testified about the Barzmans to HUAC in early 1951. The director had returned to the U.S. and was in prison on the Hollywood 10 contempt charge. "In order to get out of prison he named us and a lot of other people," said Barzman.
It was the Depression-era drama based on the Pietro Di Donato novel that brought the Barzmans and their two small children to England in early 1949. They ended up not returning to the U.S. until 1976.
"We left the house standing here," she said referring to the couple's Los Angeles home. Barzman, writing a screenplay and an illustrated book about her teenage years in New York, recalled, "I thought we would be back. Then we had several phone calls saying, 'Stay where you are. There are subpoenas out for everybody.'"
susan.king@latimes.com