From London to Liverpool to Glasgow our cities are taking inspiration from Manhattan. Yet an ugly vision lies behind its new developments. 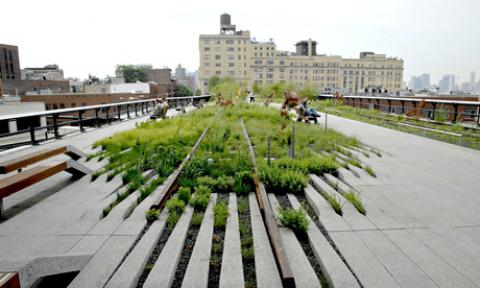 Start spreading the news, they’re arriving tomorrow. Urban revamps inspired by New York are cropping up all over the UK. A £3.5bn project to turn East London’s Silvertown Quays into a “London version of New York’s Meatpacking District” was announced recently, while redevelopment plans for south London’s Heygate estate initially included an area called Tribeca Square. Liverpool has a project to transform the city’s disused Churchill flyover into Merseyside’s answer to Manhattan’s High Line. There’s even a fledgling campaign to create a High Line lookalike in Glasgow’s Gorbals. That’s an awful lot of inspiration to come from one smallish stretch of southwest Manhattan.

It’s New York’s undeniable glamour that British developers can’t resist. When your city’s default backdrop is drizzle, streaky concrete and endless branches of Greggs, it’s easy to yearn wistfully for sparkling skyscrapers, chrome-plated diners and avenue canyons stretching to infinity. But are the New York models currently being touted in Britain ones we want to emulate?

Manhattan’s Meatpacking District, for example, is actually a tale of opportunity lost. Formerly an area of slaughterhouses, by the late 1980s its light industry had gone and it subsequently developed a reputation as a place for sex clubs and street prostitution. Warehouse spaces started to attract artists looking for cheap studios. But they were soon given their marching orders as the rising fortunes of the nearby West Village pushed everything upmarket. Nowadays, it’s an anodyne place characterised by uniformly high rents, expensive chain boutiques and brash nightclubs. This doesn’t make it an unmitigated failure, but neither does it make it somewhere other cities should rush to copy. As a remnant of Lower Manhattan’s past eclecticism and vitality, it’s a husk.

Then there’s the High Line, Manhattan’s park on top of a former elevated goods railway. Ending in the Meatpacking District, there’s no denying the walkway’s beauty and popularity with tourists (or the fact that it has sent local property values skyrocketing). Its arrival nonetheless reflects an ugly shift in New York’s priorities. The High Line arrived just as the city’s contribution to the running costs of the parks where tourists never venture fell through the floor. It created a template where a park could only attract attention and funding if it was an agent of urban transformation (and often displacement) rather than an everyday space for ordinary citizens’ recreation.

As David J Madden, of the London School of Economics, put it to me: “In New York, public parks and other urban resources are languishing due to strained public finances, while private money dictates the location and character of a few lavishly funded projects. So if the goal is creating a democratic city that serves everyone, the High Line isn’t the solution, it’s part of the problem.”

Not all of the British projects that refer to New York are repeating those mistakes. Liverpool’s plans for its own High Line, for example, seem sensible enough, using the money it would have otherwise cost to just demolish the Churchill flyover to create a public asset. Others have come up against local objections, such as those that did for south London’s Tribeca Square, which is now going to be the innocuous-sounding One, The Elephant. It seems that bulldozing social housing and then naming its private replacement after the neighbourhood where Beyoncé lives was too much for locals to stomach.

We should be asking ourselves what these New York-branded projects are selling us. Lower Manhattan’s transformation has happened against a wider backdrop of social displacement, public spending cuts and growing inequality. British cities are already experiencing more than enough of these as it is. We don’t need to import American models to show us how to do it even better.