Gaza: The Jewish Right and the Muslim Right

The war in Gaza has strengthened both the Muslim Right and the Jewish Right; while the results have been disastrous for the people of Gaza, they aren't good for the people of Israel either. Meredith Tax asks, what does this mean for the two state solution? 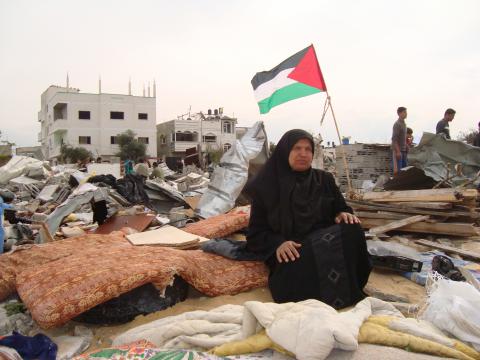 This is the first of a series of articles by Meredith Tax on Israel and Palestine.

The Israel-Palestine conflict is the gift that keeps on giving for both the Muslim and Jewish Right; each can use it to justify their militarism and their hatred of the other.

I have written here before about the transnational Muslim Right.  Hamas is part of it, an offshoot of the Egyptian Muslim Brotherhood, and its rule in Gaza has been as repressive as one would expect.  If Hamas ever actually becomes part of the government of a Palestinian state, no doubt it will have the same problems reconciling its ideology with the need to govern as the Muslim Brotherhood has had in Egypt and Tunisia.  Its popularity in the Gaza strip had sunk to 20% before the war, according to a 2013 poll.  Now the Israeli offensive has brought its numbers up again. But will it be able to stay in power without bringing home something to make up for all the destruction?

The Israeli Right (supported by a transnational Jewish Right and many in the middle) has been in power for most of the last eighteen years, except for a two year centrist interregnum under Ehud Barak.  It includes the religious fundamentalists of the National Religious Right, who think God gave them the right to all the land 'from the river to the sea', and the ethnic nationalists of the Likud coalition who want as much land as they can get, with or without God's involvement.  Some, like Netanyahu, are traditional maximalist militarist Zionists; others are outright fascists who advocate ethnic cleansing, like foreign minister Avigdor Lieberman or Deputy Speaker of the Knesset Moshe Feiglin.  There is nothing concealed about their aims; Feiglin wrote a recent op ed proposing the following solution in Gaza:

"All the military and infrastructural targets will be attacked with no consideration for ‘human shields’ or ‘environmental damage’... After the IDF completes the "softening" of the targets with its fire-power, the IDF will conquer the entire Gaza, using all the means necessary to minimize any harm to our soldiers, with no other considerations....The enemy population that is innocent of wrong-doing and separated itself from the armed terrorists will be treated in accordance with international law and will be allowed to leave.... Subsequent to the elimination of terror from Gaza, it will become part of sovereign Israel and will be populated by Jews".

The Jewish Right says that the people of Gaza elected Hamas and are therefore implicated in its missile attacks on Israeli civilians.  The Muslim Right says that the people of Israel elected Netanyahu and are therefore implicated in Israel's assassinations, carpet bombings, deprivation of water, and slow starvation of Gaza.  But collective punishment is a war crime, no matter who does it.  While Israel's ability to kill civilians is greatly superior to that of Hamas, both sides have their war criminals.  The relationship is symbiotic.  Israel's destruction of Gaza helps keep the Muslim Right in power in Gaza; Hamas's rockets strengthen the hold of the Right in Israel.

For many years diplomats have pursued the solution of 'two states for two peoples', using the pre-1967 borders, with Jerusalem either internationalized or the capital of both states, and 'a just resolution of the refugee question'. This has been the basis of every peace proposal since the 1974 UN Resolution.  The Palestine Liberation Organization made its acceptance of this plan official in the Oslo Accords of 1993, and even Hamas said in 2008 that it would be willing to accept the 1967 boundaries if the Israelis recognized Palestinians' national rights. Israel too gave lip service to the idea of a two state solution for many years, while establishing 'facts on the ground' (Ariel Sharon's term) that would make it impossible.

Since 1977, Israel has built settlements on so much contested land that they make a contiguous Palestinian state almost impossible; Israel has also put up a huge separation wall that takes in still more land, built a separate system of roads barred to Palestinians, and treated Palestinians in the West Bank and especially in Gaza as if they were all potential Israeli prisoners rather than an independent people headed towards sovereignty.  Three weeks ago, Netanyahu finally made it explicit that he will never go for a two state solution, as described in the Times of Israel by David Horovitz, one of his supporters:

'Amid the current conflict, he elaborated, “I think the Israeli people understand now what I always say: that there cannot be a situation, under any agreement, in which we relinquish security control of the territory west of the River Jordan”.  Not relinquishing security control west of the Jordan, it should be emphasized, means not giving a Palestinian entity full sovereignty there.... That sentence, quite simply, spells the end to the notion of Netanyahu consenting to the establishment of a Palestinian state'.

Is this, then, the end of the two state solution for which so many have struggled for all these years?  As an American Jew who hates the Occupation and the ideas of the Jewish Right, I demonstrated against the invasion of Lebanon in the eighties, when Americans for Peace Now began to pull together in New York. I spoke up when the Second Intifada began in 2000, and helped arrange speaking tours and events to support the Israeli peace movement.  I was active in the early days of Brit Tzdek v' Shalom (Jewish Alliance for Justice and Peace) , a precursor to the two state lobbying group J Street; I have also been supportive of the more leftwing work of Jewish Voice for Peace, since I think a spectrum of progressive viewpoints and pressure groups is needed to reach people in the centre and in Washington.

Yet in the back of my mind, something kept bothering me. I could not understand how American Jews, including people in my family, could depart so far from the ethical Judaism I grew up with that they were willing to support Israel right or wrong.  In 2002, I concluded that there are two different Jewish religions. Mine is summed up in the words of Micah 8, that the duty of  a Jew is to 'do justly, love mercy, and walk humbly'.  The other, I wrote then, is a religion of 'death and resurrection: Jewish martyrdom in the Holocaust is redeemed by Jewish resurrection in the state of Israel....Whatever one might say about this second religion, it is certainly not Judaism. Making a god out of a state looks a lot like idolatry. Worshipping the land, to the point where justice and human lives are insignificant next to "facts on the ground" and a dream of Greater Israel—isn't this what the prophets sought to end when they cast down the standing stones'?

I had no idea that I was echoing the thoughts of Hannah Arendt, who distinguished between what she called a Jewish homeland, a cultural community in which Jews would form relationships of mutual respect with the Arabs who already lived in Palestine, and a Jewish state, which would be focused on exclusive control of territory.  During the 1948 war that created the state of Israel, Arendt wrote in 'The Jewish Homeland' that this was not what she had in mind:

"The land that would come into being would be something quite other than the dream of world Jewry, Zionist and non-Zionist. The ‘victorious’ Jews would live surrounded by an entirely hostile Arab population, secluded into ever-threatened borders, absorbed with physical self-defense to a degree that would submerge all other interests and activities. The growth of a Jewish culture would cease to be the concern of the whole people; social experiments would have to be discarded as impractical luxuries; political thought would center around military strategy….Under such circumstances… the Palestinian Jews would degenerate into one of those small warrior tribes about whose possibilities and importance history has amply informed us since the days of Sparta. Their relations with world Jewry would become problematical, since their defense interests might clash at any moment with those of other countries where large number of Jews lived".

After Oslo, many of us believed Israel had finally seen the necessity to give land for peace.  But in the years that followed, the settler 'facts on the ground' and the harshness of the Occupation sparked the Second Intifada, which led to the election of Hamas in Gaza in 2007, when people got fed with the corruption of Palestinian Authority leaders.  They did not realize that Israeli would retaliate with Operation Cast Lead, then try to starve them to death, making Gaza what Noam Chomsky has called 'the world's largest open air prison'.  And now, this war.

Enough experts on the subject—including Peter Beinart, Noura Erakat, Rashid Khalidi, and Henry Siegman—have analyzed the causes and events of this war to make it unnecessary for me to do so. Will the mass civilian deaths, destruction of infrastructure and housing, bombing of  UN schools and children's playgrounds, render further Palestinian resistance impossible?  The US wrote the playbook for 'bombing Gaza back into the stone age' in the Vietnam War, and we all know how that turned out. But if Israeli leaders were good at thinking far ahead, they would not have supported Hamas as a counterweight to Arafat in the first place.

Clearly the answer will not come from politicians, whether they are in Cairo or Ramallah, Tel Aviv or Washington. The current crisis has made clear the need for new voices and analyses that go beyond not only the Jewish or Muslim Right but of received political wisdom in general.

Meredith Tax's next two articles will focus on new voices, and on the Israel-Washington nexus.

Meredith Tax has been a writer and political activist since the late 1960s, and is a Commissioning Editor at openDemocracy 50.50. She was a member of Bread and Roses, founding chair of International PEN’s Women Writers’ Committee, founding President of Women’s WORLD, and a co-founder of the Centre for Secular Space. Her views are her own and do not necessarily represent those of any organisation.