Why Has It Taken This Long for a Men’s Pro-Sports Team to Hire a Female Coach?

American sports—structured and codified over a century ago as a leisure pastime created by men for male consumption—just got marginally better, and that is cause for celebration. 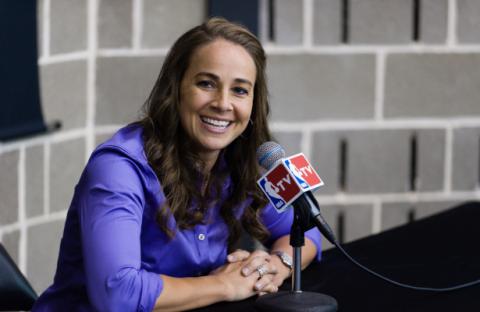 The biggest line of horseshit you will ever hear in professional sports not uttered by Dan Snyder is that no one in the executive suites cares if you are black or white, male or female, gay or straight. As long as you can help the team win, there is a place for you. Wrong. The pivot of all executive decisions is not “How can the team win?” but “How can I keep my damn job?”

The front office fear is that if they bring in a “distraction” and the team flounders, they’ll be scapegoated for bringing in this “distraction,” quickly dispatched, unemployed or otherwise ass out. (And Lord do I hate that word “distraction” as a stand-in for “triggers someone else’s bigotry.”)

That impulse to avoid difference rewards cowardice—politely called “risk-averse behavior”—as teams bypass players that differ from established norms, even if they can help. Someone has to choose to not be the coward. It took the St. Louis Rams’s Jeff Fisher to make the decision to not be another NFL milksop and draft Michael Sam at the end of the seventh round.

Gregg Popovich, coach and Kaiser of the San Antonio Spurs, is no one’s idea of cowardly. So predictably, even obviously, it was Coach Pop who made the decision to hire Becky Hammon as the first full-time female assistant coach in any major professional men’s sport in the United States.

“I very much look forward to the addition of Becky Hammon to our staff,” Popovich said. “Having observed her working with our team this past season, I’m confident her basketball IQ, work ethic and interpersonal skills will be a great benefit to the Spurs.”

Hammon comes to the Spurs after sixteen years in the WNBA, her last eight with the outfit in San Antonio where she got to know the Spurs operation. But Becky Hammon on a bench was going to happen. As Kate Fagan wrote in her indispensable piece on the hire, “If you know Becky Hammon, one thing has always been clear: She would become a coach after she finished playing….

“She could see a play once and know all its options and offshoots, categorize them from most to least effective. And she could do this for every position on the court, instantly—as if the X’s and O’s had been coded into her DNA.”

Becky Hammon by all accounts has the skills to coach. Yet that glass ceiling would have been a glass fortress if not for Pop’s being Pop. Of course it was going to be Coach Pop. Beneath the military crew-cut and Roger Murtaugh demeanor, Coach Pop lives his life as the reality of Phil Jackson’s image. He doesn’t talk in New Age riddles and hang out with lefty celebs while, when it matters, scoffing about keeping politics out of sports.

Instead, Coach Pop looks for real ways to make his corner of the world a little more just. Hiring Becky Hammon on the merits of her ability—while not giving one holy hell about the fallout in Texas or beyond—is how he does it. I don’t know if a part of Pop is also fighting for the idea that there is a place for women in sports beyond being sexist clickbait, but that’s the result. I do know from my interactions with the man that he admires those who have historically risked their perch of privilege in pro sports to impact the works. He thinks about the world beyond sports and wants it to be better.

American sports—structured and codified over a century ago as a leisure pastime created by men for male consumption—just got marginally better, and that is cause for celebration. While the NFL seems to see disrespecting its female fan base as part of its mission statement, Coach Pop—by just being Pop—lives by a different code. Because of that code, Becky Hammon will be a coach in the NBA. It feels great to tell my young daughter about the news. Hell, it feels great to even type the words.