The worst states are all in the Old South. 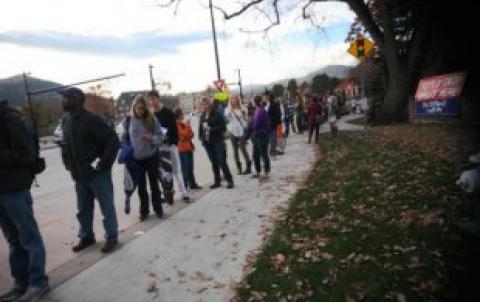 A year after a conservative U.S. Supreme Court majority gutted the crown jewel of the civil rights movement, the 1965 Voting Rights Act (VRA), the nation’s foremost voting rights attorneys say that racial discrimination in voting is rampant, especially in southern states where the the VRA helped to ensure access to the ballot.

“We are in a very, very dangerous time for our democracy,” said Barbara Arnwine, the president and executive director of the Lawyers Committee for Civil Rights Under Law, which convened 25 hearings across the country since last fall and heard testimony from more than 400 people about how the Supreme Court was wrong to assert that the U.S. had evolved past its decades of discriminatory voting practices.

“If you control who votes and where they vote, you control the power,” said Leon Russell, Vice-Chair of the National Association for the Advancement of Colored People, speaking Wednesday at a press conference, where the Lawyers Committee, NAACP, Demos, League of Young Voters and others issued a comprehensive report on ongoing voting barriers before and after the 2013 Court ruling gutting the VRA, Shelby County v. Holder.

“The Court got it wrong that African-Americans feel so motivated to vote,” Arrwine said, referring to the right-wing talking point that civil rights laws aren’t needed because those communities supposedly protected under the laws are casting ballots. “They are voting because they want to make sure that no-one denies them the right to vote. It means that they are more determined to vote. If people stood in line for 10 hours in Florida. That wasn’t easy; that was hard… They did it because they didn’t want anyone taking away their right to vote.”

The coalition’s report, Protecting Minority Voters: Our Work Is Not Done, catalogues the numerous barriers that are intended to suppress voters that have become a fixture in state and national elections: tougher voter ID laws, less flexible voting hours, lack of bilingual voting materials, allowing voter vigilante groups to station observers at polls, and other changes affecting who is likely to get elected—such as drawing district lines to thwart non-white candidates. Russell called that redistricting “bleaching” representation.

“It is appaling that we still have discrimination in voting,” said Dolores Huerta, who has been activist for Latino farm workers and voters since the 1960s. She said that only two out of 10 eligible Latino voters in Texas would likely do so this fall. “The huge anti-immigrant hysteria in the country makes it appear that there’s undocumented people voting. That’s not the case.”

The states with the worst records and highest barriers for non-white voters are all in the Old South, the voting rights attorneys said. Since the Supreme Court 2013 ruling gutting the VRA’s strongest enforcement section, various states have resurrected laws from their Jim Crow era past. North Carolina, led by right-wingers, essentially went from a southern state known for inclusive voting to one of the most restrictive in the nation, said Demos attorney, Tova Wang, the report’s lead author. The day after the high Court released its Shelby County ruling, Texas announced that it was implementing its tough new voter ID law, even though the federal Department of Justice suit had blocked it in federal court, she said. In Florida’s Miami-Dade County, where people had to wait up to 10 hours to vote in the last two presidential elections, an ordinance was recently passed that barred voters from using public restrooms, the NAACP’s Russell said.

While U.S. Attorney General Eric Holder has spoken about maintaining voting rights enforcement—as the Supreme Court left other parts of the VRA intact—Robert Kengle, who worked for the Department of Justice’s Voting Rights Section before joining the Lawyers Committee’s legal staff, said that Holder apparently has decided not to send DOJ election observers to the most problematic states—or anywhere in the U.S.

“There’s a lot of concerns about what is going to happen in the November elections; we don’t know what will happen,” he said, saying, for example, that local election officials could change polling place locations, or consolidate longtime precincts, without giving voters adequate notice.

“We need to move forward and not backwards,” said Patty Ferguson Bohnee, director of the Indian Legal Clinic at the Sandra Day O’Connor School of Law at Arizona State University. Bohnee noted that laws in Arizona and Kansas creating a new dual voter registration system—where people have to use different application forms to participate in state and federal elections—was already causing confusion. “That makes it hard in Arizona for naturalized citizens to vote.”

The voting rights leaders said that the solutions lay inside and outside the halls of power. Congress should fix the Supreme Court’s errors and strengthen the Voting Rights Act, they said, but they said there was little likelihood of that before the fall election. On the other hand, they said that people neeed to pay attention so new laws didn’t block their ability to register to vote and to get a ballot in November. As has been the case for years, the Lawyers’ Committee wants the public to report problems as they occur, so that it can deploy its legal teams to challenge those barriers in court, Arnwine said.

The most hopeful comment came from Biko Baker, executive director of the League of Young Voters, who suggested that, at least for young people, the Internet offered many tools to help eligible voters navigate the barriers that are put in their way.

“Voter suppression continues to be a real threat,” he said. “I’ve come to the conclusion that America’s at a crossroads. On one hand, we have the most diverse, technologically saavy and civicly engaged generation ever. On the other, we have some elected officials trying to make it harder for America’s youngest citizens to vote.”

In a follow-up e-mail, Baker said his group was seeking funding to help people acquire the needed paperwork to clear the hurdles set up by new voter ID laws, and to use more Internet-based tools to surmount possible last-minute obstacles, such as polling place locator apps. Looking past November, he would like to see drivers’ education programs highlight voter registration—as people can register to vote when getting their license. “We have to reach out and make this a cultural thing.”

Steven Rosenfeld covers national political issues for AlterNet, including America's retirement crisis, the low-wage economy, democracy and voting rights, and campaigns and elections. He is the author of "Count My Vote: A Citizen's Guide to Voting" (AlterNet Books, 2008).