The Liberal Government in Quebec is attempting to pass a bill that would mandate a 50-50 split between municipalities and unionized workers on pension contributions and future deficits. Over 122,000 municipal workers and retirees would be affected. The bill would freeze the automatic indexing for current retiree pensions. Unions are fighting back. 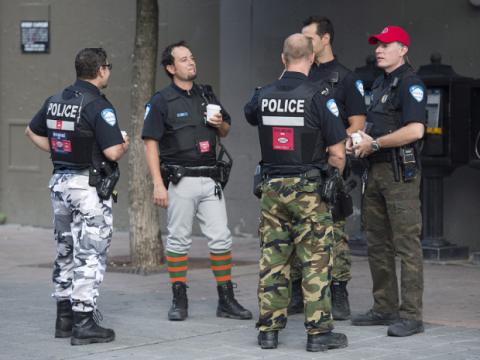 Montreal Police officers are shown on a street in Montreal, Thursday, August 7, 2014., THE CANADIAN PRESS/Graham Hughes
The funky pants and sticker-plastered city vehicles are just the beginning as workers and the province draw battle lines over a proposed reform of municipal pensions.
The Liberal government introduced its proposal to overhaul municipal pensions in mid-June, saying those plans carry a collective deficit of about $3.9 billion and aren’t sustainable in the long-term.
Underfunding and long-term sustainability of pension plans is a common concern across the country. In Quebec, the response from workers has been hard to ignore.
City employees like police officers, firefighters, public transit and other blue- and white-collar workers have been dressing down for weeks.
Police in Montreal, for example, have donned bright red ball caps and shed their work-issue slacks for camouflage, fluorescent and multi-coloured pants to show their anger.
Meanwhile, city vehicles, public transit buses, police and fire trucks across the province have been plastered with slogan stickers.
Unions say they are being put on the hook for pension shortfalls that are not of their making and feel some municipalities are looking to save on labour costs by renegotiating retirement deals.
“We want to send a clear message to governments that if it continues on that path, it’s going to be war,” union spokesman Marc Ranger warned.
The government’s Bill 3 is calling for a 50-50 split between municipalities and unionized workers on contributions and future deficits.
Currently, the ratio varies in the 170 individual plans that are targeted under the legislation. The bill proposes freezing the automatic indexation of pensions for about 20,000 workers already retired and sets out a timeline for negotiating a settlement, including possible arbitration.
It isn’t going over well with the 122,000 workers and retirees affected, but Ranger says the government hasn’t shown willingness to budge.
Ranger acknowledges that gaining support from the public — many of whom don’t have any pension plan at all — is a delicate task. So they’ve opted for some unorthodox tactics like the pants and stickers to get that support.
Other unsanctioned tactics haven’t gone over so well.
Police in Laval were photographed as they drove through large puddles and muddied their squad cars at a construction site. In another incident, a Montreal police vehicle was entirely encased in union protest stickers.
Montreal’s police brotherhood also denied it had anything to do with about 100 police officers calling in sick one weekend morning, forcing overtime and a scramble to find replacements.
Ranger says the tactics suggest members are angry.
“We want to be very visible by all means,” Ranger said. “We know that it’s a thin line with public opinion, but at the same time people are sensitive to the fact that when contracts were signed, they should be respected.”
Some mayors have said they’d rather negotiate directly with workers than have the provincial government stepping in with blanket legislation. Others, including big cities like Montreal and Quebec City with big, unionized workforces, are firmly behind the Quebec government proposal.
The tension continues to mount as parliamentary hearings on Bill 3 begin Aug. 20.
An association representing municipal police officers says members would not hesitate to “radicalize” or intensify their pressure tactics, without providing any specifics.
Denis Cote said his organization would be taking to social and traditional media through an ad campaign to garner public support.
“The objective of the municipalities is very simple: it’s to go get salary retroactively, and it’s not allowed,” Cote said.
Ranger says the unions plan to show at the hearings that the situation is not as dire as the government makes it and that union experts peg the deficit at about $2 billion.
“Right now, the government is prepared to tear down all signed contracts and to treat defined benefit pension funds as if they were all in trouble,” Ranger said. “We have 170 pension funds in Quebec right now and about 10 of them are in trouble, not all of them.”
Ranger said unions have shown a willingness to negotiate. He cites a recent contract with Montreal blue-collar workers where contributions were increased, the retirement age was pushed back and a special fund to deal with future shortfalls was set up. The blue-collars currently have as many retirees — 5,500 — as they do active employees.
“We are aware we live longer and it costs more,” Ranger said.
The provincial government says it wants Bill 3 adopted by year’s end. That would trigger legal battles that could end up at the Supreme Court of Canada, Ranger said.
The current battle is a test for the Liberals, who warned that tough economic decisions would have to be made when it came to power last April.
Premier Philippe Couillard said Sunday his government wouldn’t cave to the pressure tactics.
“I won’t retreat on this issue,” he told reporters in Sherbrooke at a gathering for his party’s youth wing.
Municipal Affairs Minister Pierre Moreau was not available for an interview but said when the bill was introduced that there was no question of off-loading the costs onto Quebecers.
“In the past, no one took care of those deficits, and that’s the reason why we have the situation we’re trying to solve today,” Moreau said.
Subscribe to Portside