Antisemitism on Rise Across Europe 'in Worst Times Since the Nazis'

Roger Cukierman, president of France's Crif, said French Jews were "anguished" about an anti-Jewish backlash that goes far beyond even strongly felt political and humanitarian opposition to the current fighting: "They are not screaming 'Death to the Israelis' on the streets of Paris," Cukierman said last month. "They are screaming 'Death to Jews'." 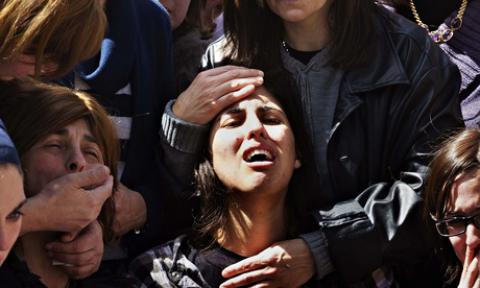 Mother of Miriam Monsonego, seven, at funeral of her daughter and three other victims of Toulouse school shooting. , Photograph: Menahem Kahana/AFP/Getty Images

In the space of just one week last month, according to Crif, the umbrella group for France's Jewish organisations, eight synagogues were attacked. One, in the Paris suburb of Sarcelles, was firebombed by a 400-strong mob. A kosher supermarket and pharmacy were smashed and looted; the crowd's chants and banners included "Death to Jews" and "Slit Jews' throats". That same weekend, in the Barbes neighbourhood of the capital, stone-throwing protesters burned Israeli flags: "Israhell", read one banner.

In Germany last month, molotov cocktails were lobbed into the Bergische synagogue in Wuppertal – previously destroyed on Kristallnacht – and a Berlin imam, Abu Bilal Ismail, called on Allah to "destroy the Zionist Jews … Count them and kill them, to the very last one." Bottles were thrown through the window of an antisemitism campaigner in Frankfurt; an elderly Jewish man was beaten up at a pro-Israel rally in Hamburg; an Orthodox Jewish teenager punched in the face in Berlin. In several cities, chants at pro-Palestinian protests compared Israel's actions to the Holocaust; other notable slogans included: "Jew, coward pig, come out and fight alone," and "Hamas, Hamas, Jews to the gas."

Across Europe, the conflict in Gaza is breathing new life into some very old, and very ugly, demons. This is not unusual; police and Jewish civil rights organisations have long observed a noticeable spike in antisemitic incidents each time the Israeli-Palestinian conflict flares. During the three weeks of Israel's Operation Cast Lead in late 2008 and early 2009, France recorded 66 antisemitic incidents, including attacks on Jewish-owned restaurants and synagogues and a sharp increase in anti-Jewish graffiti.But according to academics and Jewish leaders, this time it is different. More than simply a reaction to the conflict, they say, the threats, hate speech and violent attacks feel like the expression of a much deeper and more widespread antisemitism, fuelled by a wide range of factors, that has been growing now for more than a decade.

"These are the worst times since the Nazi era," Dieter Graumann, president of Germany's Central Council of Jews, told the Guardian. "On the streets, you hear things like 'the Jews should be gassed', 'the Jews should be burned' – we haven't had that in Germany for decades. Anyone saying those slogans isn't criticising Israeli politics, it's just pure hatred against Jews: nothing else. And it's not just a German phenomenon. It's an outbreak of hatred against Jews so intense that it's very clear indeed."

Roger Cukierman, president of France's Crif, said French Jews were "anguished" about an anti-Jewish backlash that goes far beyond even strongly felt political and humanitarian opposition to the current fighting: "They are not screaming 'Death to the Israelis' on the streets of Paris," Cukierman said last month. "They are screaming 'Death to Jews'." Crif's vice-president Yonathan Arfi said he "utterly rejected" the view that the latest increase in antisemitic incidents was down to events in Gaza. "They have laid bare something far more profound," he said.

Nor is it just Europe's Jewish leaders who are alarmed. Germany's chancellor, Angela Merkel, has called the recent incidents "an attack on freedom and tolerance and our democratic state". The French prime minister, Manuel Valls, has spoken of "intolerable" and clearly antisemitic acts: "To attack a Jew because he is a Jew is to attack France. To attack a synagogue and a kosher grocery store is quite simply antisemitism and racism".

France, whose 500,000-strong Jewish community is one of Europe's largest, and Germany, where the post-war exhortation of "Never Again" is part of the fabric of modern society, are not alone. In Austria last month, a pre-season friendly between Maccabi Haifa and German Bundesliga team SC Paderborn had to be rescheduled after the Israeli side's previous match was called off following an attempted assault on its players.

The Netherlands' main antisemitism watchdog, Cidi, had more than 70 calls from alarmed Jewish citizens in one week last month; the average is normally three to five. An Amsterdam rabbi, Binjamin Jacobs, had his front door stoned, and two Jewish women were attacked – one beaten, the other the victim of arson – after they hung Israeli flags from their balconies. In Belgium, a woman was reportedly turned away from a shop with the words: "We don't currently sell to Jews."

In Italy, the Jewish owners of dozens of shops and other businesses in Rome arrived to find swastikas and anti-Jewish slogans daubed on shutters and windows. One slogan read: "Every Palestinian is like a comrade. Same enemy. Same barricade"; another: "Jews, your end is near." Abd al-Barr al-Rawdhi, an imam from the north eastern town of San Donà di Piave, is to be deported after being video-recorded giving a sermon calling for the extermination of the Jews.

There has been no violence in Spain, but the country's small Jewish population of 35,000-40,000 fears the situation is so tense that "if it continues for too long, bad things will happen," the leader of Madrid's Jewish community, David Hatchwell, said. The community is planning action against El Mundo after the daily paper published a column by 83-year-old playwright Antonio Gala questioning Jews' ability to live peacefully with others: "It's not strange they have been so frequently expelled."

Studies suggest antisemitism may indeed be mounting. A 2012 survey by the EU's by the Fundamental Rights agency of some 6,000 Jews in eight European countries – between them, home to 90% of Europe's Jewish population – found 66% of respondents felt antisemitism in Europe was on the rise; 76% said antisemitism had increased in their country over the past five years. In the 12 months after the survey, nearly half said they worried about being verbally insulted or attacked in public because they were Jewish.

Jewish organisations that record antisemitic incidents say the trend is inexorable: France's Society for the Protection of the Jewish Community says annual totals of antisemitic acts in the 2000s are seven times higher than in the 1990s. French Jews are leaving for Israel in greater numbers, too, for reasons they say include antisemitism and the electoral success of the hard-right Front National. The Jewish Agency for Israel said 3,288 French Jews left for Israel in 2013, a 72% rise on the previous year. Between January and May this year, 2,254 left, against 580 in the same period last year.

In a study completed in February, America's Anti-Defamation League surveyed 332,000 Europeans using an index of 11 questions designed to reveal strength of anti-Jewish stereotypes. It found that 24% of Europeans – 37% in France, 27% in Germany, 20% in Italy – harboured some kind of anti-Jewish attitude.

So what is driving the phenomenon? Valls, the French prime minister, has acknowledged a "new", "normalised" antisemitism that he says blends "the Palestinian cause, jihadism, the devastation of Israel, and hatred of France and its values".

Mark Gardner of the Community Security Trust, a London-based charity that monitors antisemitism both in Britain and on the continent, also identifies a range of factors. Successive conflicts in the Middle East he said, have served up "a crush of trigger events" that has prevented tempers from cooling: the second intifada in 2000, the Israel-Lebanon war of 2006, and the three Israel–Hamas conflicts in 2009, 2012 and 2014 have "left no time for the situation to return to normal." In such a climate, he added, three brutal antisemitic murders in the past eight years – two in France, one in Belgium, and none coinciding with Israeli military action – have served "not to shock, but to encourage the antisemites", leaving them "seeking more blood and intimidation, not less".

In 2006, 23-year old Ilan Halimi was kidnapped, tortured and left for dead in Paris by a group calling itself the Barbarians Gang, who subsequently admitted targeting him "because he was a Jew, so his family would have money". Two years ago, in May 2012, Toulouse gunman Mohamed Merah shot dead seven people, including three children and a young rabbi outside their Jewish school. And in May this year Mehdi Nemmouche, a Frenchman of Algerian descent thought to have recently returned to France after a year in Syria fighting with radical Islamists, was charged with shooting four people at the Jewish museum in Brussels.

If the French establishment has harboured a deep vein of anti-Jewish sentiment since long before the Dreyfus affair, the influence of radical Islam, many Jewish community leaders say, is plainly a significant contributing factor in the country's present-day antisemitism. But so too, said Gardner, is a straightforward alienation that many young Muslims feel from society. "Often it's more to do with that than with Israel. Many would as soon burn down a police station as a synagogue. Jews are simply identified as part of the establishment."

While he stressed it would be wrong to lay all the blame at the feet of Muslims, Peter Ulrich, a research fellow at the centre for antisemitism research (ZfA) at Berlin's Technical University, agreed that some of the "antisemitic elements" Germany has seen at recent protests could be "a kind of rebellion of people who are themselves excluded on the basis of racist structures."

Arfi said that in France antisemitism had become "a portmanteau for a lot of angry people: radical Muslims, alienated youths from immigrant families, the far right, the far left". But he also blamed "a process of normalisation, whereby antisemitism is being made somehow acceptable". One culprit, Arfi said, is the controversial comedian Dieudonné: "He has legitimised it. He's made acceptable what was unacceptable."

A similar normalisation may be under way in Germany, according to a 2013 study by the Technical University of Berlin. In 14,000 hate-mail letters, emails and faxes sent over 10 years to the Israeli embassy in Berlin and the Central Council of Jews in Germany, Professor Monika Schwarz-Friesel found that 60% were written by educated, middle-class Germans, including professors, lawyers, priests and university and secondary school students. Most, too, were unafraid to give their names and addresses – something she felt few Germans would have done 20 or 30 years ago.

Almost every observer pointed to the unparalleled power of unfiltered social media to inflame and to mobilise. A stream of shocking images and Twitter hashtags, including #HitlerWasRight, amount, Arfi said, almost to indoctrination. "The logical conclusion, in fact, is radicalisation: on social media people self-select what they see, and what they see can be pure, unchecked propaganda. They may never be confronted with opinions that are not their own."