Racism, the Misuse of Genetics and a Huge Scientific Protest

Perhaps unwittingly, perhaps deliberately, Wade has blurred "the distinction between storytelling and science," writes Eisen. The blurring of that line is infecting scientific discussions that have great public implications--it's visible, for example, in the political attack on climate science, the promotion of creationism, and the marketing of California's multibillion-dollar stem cell program. 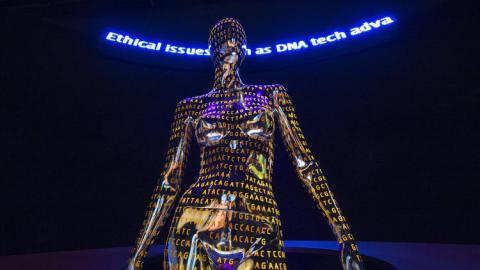 A display at the Smithsonian's National Museum of Natural History in Washington celebrates the Human Genome Project with a depiction of the DNA code, (MICHAEL REYNOLDS / EPA)

A Troublesome Inheritance: Genes, Race, and Human History is the new book by science writer Nicholas Wade that asserts a genetic basis for certain human behaviors and distinguishes them by race. It's been widely panned in book reviews, especially by experts in the fields of science and social science touched on by the work.

Reviewers have cited scientific errors in the book, but typically aim more directly at Wade's conclusions.

The most newsworthy reaction to the book has just come from the genetic sciences community, in the form of an open letter signed by (as of this writing) 143 senior biologists and geneticists from around the world, decrying what they say is Wade's "misappropriation of research from our field to support arguments about differences among human societies."

Academic researchers won't touch the subject of human race for fear that their careers will be ruined. - Nicholas Wade, author of "A Troublesome Inheritance"

They write: "Wade juxtaposes an incomplete and inaccurate account of our research on human genetic differences with speculation that recent natural selection has led to worldwide differences in I.Q. test results, political institutions and economic development. We reject Wade’s implication that our findings substantiate his guesswork. They do not."

If there's been a more thorough repudiation of a responsible publisher's nonfiction work by experts in its field in recent years, we haven't seen it. (The publisher is Penguin Press.)

A Johns Hopkins study of math test differences between boys and girls prompted a media blitz—“Do Boys Have a Math Gene?” asked Newsweek. In 2013, an academic study led New York Times columnist Thomas B. Edsall to write of a genetic disposition to conservative or liberal politics. "Do Your Genes Make You a Democrat?" asked one of dozens of follow-on articles at other publications. The torrent was barely stemmed when one of the cited researchers responded that that was "not an appropriate conclusion to draw."

Any subject as poorly understood by the public as genetics is tailor-made for exploitation by corporate marketers. Just minutes ago, I received an email flash from the firm 23andMe, which sells simple genetic tests to the mass market (and which has gotten itself in trouble with the Food and Drug Administration). "Do opposites really attract?" it asks. "A recent report from University of Colorado, Boulder shows that people are more likely to settle down with those who have similar genetics, not opposite." This is the language of infomercials, not science.

Wade's book follows a similar path, dressing up genetic determinism with a sober scientific patina. Experienced scientists say they aren't fooled. As biologist H. Allen Orr accurately describes Wade's thesis in a devastating deconstruction in The New York Review of Books: "Certain people were predisposed genetically to behaviors and thus institutions that paved their way for their success, whether, say, economic (the West) or intellectual (the Jews). Other peoples, alas, had other genes."

Wade's technique can be gleaned from his treatment of Jewish accomplishments: "Jews have excelled not only in science but also in music (Mendelssohn, Mahler, Schoenberg), in painting (Pissarro, Modigliani, Rothko)....Jewish authors have won the Nobel Prize in Literature for writing in English, French, German, Russian, Polish, Hungarian, Yiddish, and Hebrew. Such achievement requires an explanation, and the best and simplest is that Jews have adapted genetically to a way of life that requires higher than usual cognitive capacity." (Emphasis added.)

Commenters have argued that Wade's approach is fundamentally racist, in that he purports to identify characteristics that ostensibly account for the success of certain races or ethnic groups, and finds their source in those groups' genes. The characteristics he identifies tend to be those of whites in general, and European whites more specifically.

In an exhaustive piece in the Boston Review, sociologist Philip Cohen places this "in the grand tradition of scientific racism."

Wade, a former science writer for the New York Times, has mounted a vigorous defense against these attacks. He contends that academics have been cowed, essentially by political pressure, from discussing the biological basis of race. "Academic researchers won't touch the subject of human race for fear that their careers will be ruined," he responded in the Huffington Post. "Only the most courageous will publicly declare that race has a biological basis."

That assertion is rejected by evolutionary biologists and other scientists. Discussion of human race isn't shunned in academia, they say: it's merely kept within the bounds of what is known and unknown. On race, researchers "say about all we can say," in the words of UC Berkeley biologist Michael Eisen. Wade, Eisen says, "is trying not just to make it OK to voice racist theories about the origins of human phenotypic variation, he is yearning to give them the validity of science."

Perhaps unwittingly, perhaps deliberately, Wade has blurred "the distinction between storytelling and science," writes Eisen. The blurring of that line is infecting scientific discussions that have great public implications--it's visible, for example, in the political attack on climate science, the promotion of creationism, and the marketing of California's multibillion-dollar stem cell program.

Genetic science is still in an infancy in which what we don't know vastly outweighs what we can say for sure. Combine that with the fraught issue of race, and you indeed have a troublesome stew.