In Spain this past May, the elections to the European Parliament produced a shock. A two-month-old party led by a 35-year-old, pony-tailed political scientist appeared out of nowhere—but clearly from the Left—to win 8 percent of the votes and five seats, transforming the infant organization into the country’s 4th largest political force. One of the party's founders, political scientist Juan Carlos Monedero, spoke with us in late August. 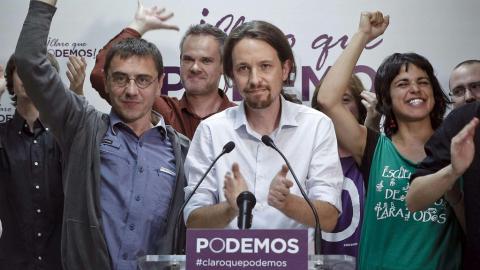 Juan Carlos Monedero, born in Madrid in 1963, studied Economics, Political Science and Sociology at the Universities of Madrid and Heidelberg, and earned his Ph.D. with a dissertation on the collapse of the German Democratic Republic. He’s been teaching at the Universidad Complutense de Madrid since 1992. Over the past 15 years, he has served as political consultant for the Venezuelan government and the Spanish United Left coalition.

More recently he has also combined his scholarly and political work with a maverick media presence as a columnist, commentator, blogger, and television anchor. Together with PODEMOS leader Pablo Iglesias he hosts La Tuerka, a feisty political debate program broadcast on local TV and the Internet. Monedero, a fearsome debater, often wears black T-shirts with political prints, has an image of Gramsci on the back of his iPad, and likes to acknowledge his debt to the progressive tradition by quoting from memory.

In 2011 Monedero published a scathing critique of the state of post-Franco Spanish democracy, The Transition As Told to Our Parents (La Transición contada a nuestros padres) that became a bestseller. Last year he published an Emergency Seminar in Politics for Decent Folks (Curso urgente de política para gente decente), a lyrical call to civic mobilization and collective political action. Pablo Iglesias Turrión, born in Madrid in 1978, holds academic degrees in Law and Political Science and earned his Ph.D. in 2008 with a dissertation about collective action in a post-national context—all at the Universidad Complutense de Madrid, where he has also taught. Between the ages of 14 and 21, Iglesias was a member of the Union of Young Spanish Communists (UJCE). He serves on the board of the CEPS Foundation, a progressive think tank. As one of the five top PODEMOS candidates, Iglesias was elected to the European Parliament in May 2014. In June, the European United Left elected him as its candidate to the presidency of the European Parliament.

A frequent columnist, commentator and blogger, Iglesias—who shares his name with the legendary 19th-century founder of the Spanish Socialist Party—hosts the political debate programs La Tuerka, (broadcast on local TV in Madrid and atwww.latuerka.net) and Fort Apache, which appears on the Spanish-language channel of Iranian public television and online (www.fortapache.es). In June, when PODEMOS held an online election in which some 56,000 voters participated, an 87 percent majority voted to have Iglesias and his team lead the party toward its first citizens’ assembly, to be held between September and November of this year. PODEMOS’s poster for the European elections did not feature the usual airbrushed fake smile of a graying leader in a suit. Instead, it presented five candidates, four of whom were born after Franco’s death: political scientist Pablo Iglesias, 35; an Argentine-born physicist, 35; a public school teacher with a degree in Arabic Studies, 32; an unemployed political scientist, 35; and the 79-year old Carlos Jiménez Villarejo, a prominent retired public prosecutor known for his fight against corruption.

The party has organized itself in some 400 local assemblies, which it calls “circles,” and has effectively mobilized social media like Facebook and Reddit to set up something that comes close to a direct democracy. This also means that its platform is still in the making, subject to a broad process of consultation. Some have called PODEMOS populist, but as the philosopher José Luis Villacañas has pointed out, the party does not try to appeal to voters’ emotions. Rather, it appeals to their intelligence, seeking collectively crafted alternatives.

All this is new in Spain. The country’s 36-year-old democracy was built on a compromise between Francoists and opposition leaders, and largely designed to limit upheaval and constrain voters’ role to casting a ballot every four years. Spain’s electoral laws favor established parties over smaller ones and rural areas over cities. Constitutional change is all but impossible. Since the Transition of 1978, its political system has spawned a tightly knit class of party professionals deeply invested in the status quo and determined to hold on to power. Designed to create stability, the system has instead encouraged widespread corruption. It has also widened the gap between politicians and their constituencies, and eroded the voters’ trust. Starting in the early 1990s, the country has seen a series of corruption scandals involving both major parties. Yet impunity reigns: Almost all public officials enjoy a form of limited legal immunity by which they can only be tried in higher-level courts.

The 2008 economic crisis, which has hit Spain harder than almost any other country, has further sunk the public’s trust. Meanwhile, a battery of ruthless, EU-imposed austerity measures and a 25 percent unemployment rate—approaching 50 percent among the young—dashed all hope. The labor party (PSOE) has been impotent in the face of the neoliberal European power bloc. With no real alternative to offer, its poll numbers have been as stagnant as those of the governing Right.

The immediate origins of PODEMOS can be traced to public protests that emerged on May 15, 2011, which helped inspire the Occupy movement in the United States later that year. The participants in the “15-M” movement called themselves indignados and demanded “Real Democracy Now.” They purposely kept far from existing party structures. PODEMOS, on the other hand, tries to strike a balance between the energetic idealism of 15-M and the recognition that change requires political work. It has positioned itself as the angry voice of the people (la gente) against the political, economic, and cultural establishment, branded as The Caste (la casta). PODEMOS has called for measures that buck neoliberal common wisdom and austerity, finding inspiration in the traditions of democratic struggle for workers’ and civil rights. Private profit, it believes, should never be allowed to trump the public good. Similarly, PODEMOS would prohibit profitable corporations from firing people, favors of a 35-hour work week, and has called for a return to a health care system controlled by the state.

PODEMOS is preparing its first citizens’ assembly—a deliberative process that is scheduled to last two months, from September 15 until November 15. While it’s still unclear to what extent PODEMOS will participate in the municipal elections of May 2015, it is gearing up for the next general elections, scheduled for December 2015.

The Volunteer is the periodical of the Abraham Lincoln Brigade Archives (ALBA). This is an extended version of the interview (pdf) that appeared in the September 2014 print issue of The Volunteer.
Sebastiaan Faber is Chair of ALBA’s Board of Governors and teaches at Oberlin College.