Rebuilding labor means more than ticking off new non-white members, however, it also means transformation—and when it comes to workers of color that means integrating individual on-the-job concerns with “off-the-clock” community concerns like climate change, racial profiling, mass incarceration and, certainly, police violence. And therein lies the rub for organized labor as it looks toward the future. 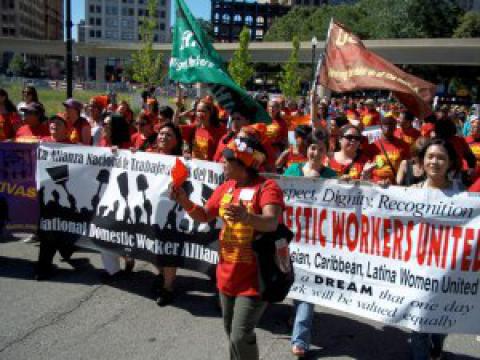 Back in 1999, Victor Narro co-organized* up to 100 Los Angeles-based day laborers—mainly Latino and many undocumented—to attend the AFL-CIO convention, the nation’s largest labor gathering. Now, he admits, they were all a little naïve. Without affiliate status, the group learned at the entrance that they could not share the hall with the representatives of 12 million union workers. “We felt like, ‘Why would [certain] workers not be allowed into the AFL-CIO convention?’,” Narro says.

What Narro, who is now a project director at the UCLA Labor Center, recalls more vividly though, is the unofficial greeting: A grip of ironworkers and others in the construction trade formed and, “basically told us we had no business being there. We’re not a union. We take away union jobs.” Echoing a sentiment shared by many working people of color today, Narro says, “We felt that we were not part of the labor movement.” The last decade has given Narro hope however that an unprecedented all-workers movement, not just a union member-only movement, could one day become a reality.

There are signs that traditional labor leadership, if not its dwindling white male rank and file, is taking steps to better include workers of color. Not only has it recognized the growing strength of alt-labor models like those built over the last 15 years by veteran organizer Narro. It’s slowly beginning to address the racial justice concerns of workers of color, too.

The latest indicator, labor observers say, was provoked by Michael Brown’s killing in Ferguson. It came three weeks ago in the form of a little-publicized but powerful speech by AFL-CIO president Richard Trumka. During his remarks Trumka—a former mine worker from western Pennsylvania—urged the mostly white audience attending their St. Louis convention to honestly tackle racism. “We cannot wash our hands of these issues,” he said, before recounting how local labor had instigated a 1917 pogrom against African-American migrants in St. Louis. “Racism is part of our inheritance as Americans. Every city, every state and every region of this country has its own deep history with racism. And so does the labor movement.”

After watching Trumka’s speech on YouTube (his second on race), Atlanta-based organizer Tamieka Atkins says she is more inclined to count herself as part of the labor movement. “I generally say that I belong to the domestic workers movement—or the workers rights movement because I haven’t felt represented by labor,” says Atkins, director of the first and largely African-American chapter of the Latina and immigrant National Domestic Workers Alliance. As a sign of their growing strength, the 10,000-member alliance boasts a newly announced MacArthur “genius” grant winner in Ai-Jen Poo and domestic workers’ bills of rights wins in four states.

“Now, because of this speech and other overtures,”—like dedicating a major part of the 2013 AFL-CIO convention agenda to non-union, undocumented and women workers—“I see more of an opening to say, I belong,” Atkins says.

Belonging means more than ticking off new non-white members, however. As Narro notes, it means transformation—and when it comes to workers of color that means integrating individual on-the-job concerns with “off-the-clock” community concerns like climate change, racial profiling, mass incarceration and, certainly, police violence. And therein lies the rub for organized labor as it looks toward the future.

Among the lines and metaphors most quoted back to this reporter from Trumka’s post-Ferguson speech is, “Our brother killed our sister’s son.” Officer Darren Wilson is union, as is Michael Brown’s mother. Trumka notably frames police violence towards young black men as a union “family matter.” But organizer Douglas Williams, who’s also policy committee chair of Moral Mondays-Alabama, sees more than an insular quarrel. He sees a fundamental internal conflict—and a clear choice being made.

“[Consider] the fact that the Missouri Fraternal Order of Police (FOP) raised hundreds of thousands of dollars for Michael Brown’s murderer, and you see the importance of [Trumka’s] speech,” Williams says, adding that, “when someone with the gravitas of Richard Trumka stands up and gives such an unequivocal endorsement of racial equality and working-class power, it is a signal that the FOP are the people who are out of line.”

Trumka, in his speech, said he supports demilitarizing police, which, BuzzFeed reports, directly counters the position of the police union that falls under the AFL-CIO, the International Union of Police Associations (IUPA). (The FOP does not belong to the AFL-CIO’s 56-member federation.) Still, in keeping with the IUPA position, he urged people not to judge the specifics of Officer Darren Wilson’s case until investigations were complete.

For workers of color, the impact of racial issues, of which the Brown killing is only one example, can overtake traditional labor concerns about wages and benefits. “Some of our members are union, many of them are not. I might have a union contract, but that doesn’t stop the police from shooting me in the street,” Los Angeles Black Worker Center director Lola Smallwood-Cuevas says, adding that Trumka’s speech was, for her, “one of the proudest moments of belonging to the labor movement.”

Amaya Smith, national media director for the AFL-CIO, says the federation is tackling the issues surrounding Brown’s killing. “In Ferguson, the AFL-CIO leadership in partnership with the Coalition of Black Trade Unionists spent time meeting with and listening to local leaders and is actively looking for ways to duplicate those conversations nationally in labor halls and councils,” she says. Practical applications like “economic training [for union members] around mass incarceration,” for example, would be one way for the body to breathe life into Trumka’s speech, says Steven Pitts, associate chair of the UC-Berkeley Labor Center.

“One of the most interesting parts of the meetings in Ferguson is that community leaders often wore three hats—and one of them was often union member,” Smith says. “I think mainstream labor may not understand that a lot of the folks who’ve been working on the ground in Ferguson are also union members. They’ve already been part of this larger [social justice] fight.”

Immediately, Smith says, many union members are stepping up to support the planning of the upcoming National Weekend of Resistance in Ferguson from October 10-13. In Atlanta, Atkins is arranging for five women to attend. And over Labor Day weekend Smallwood-Cuevas took a 36-hour bus ride from Los Angeles to Ferguson with other worker center members as part of Black Lives Matter.

Jeanina Jenkins, who works at the Ferguson McDonald’s, may not be union but she’s typical of workers of color who integrate expectations of fairness, equality and justice both on and off the job. Jenkins earns $7.97-an-hour, an increase from the $7.50 she made last April when she decided to join the fast-food worker strikes. Jenkins was finishing up her shift when she heard shots fired the Saturday afternoon that Brown was killed. Since then, she’s been double-timing it on the picket line, in Ferguson streets and in strategy meetings with local youth ever since.

On the Saturday afternoon that we speak on the phone, she’s standing in front of the police station demanding the release of recently arrested protesters.

“People around here know me ‘cause as a fast food worker, I’ve been striking for a long time. But out here, I’m just Jeanina. This is really about Michael Brown,” she says.