The political manipulation of the irrational fear of immigrants spreading disease is part of an historic pattern in United States. The recent calls for a blanket prohibition on travel from West Africa is prejudice, plain, and simple: prejudging an entire group of people, based on the sickness of a small handful. They echo the kind of bigotry directed at other immigrant groups arriving in this country since the 1800s. 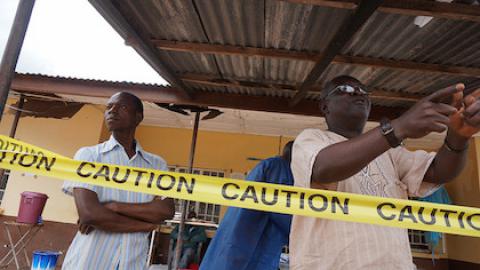 Last week, I was playing tennis when I overheard a discussion on an adjacent court about the Ebola crisis. “We should just keep the Africans out,” one gentleman declared. His doubles partner nodded approvingly. “If you want to stop a leak, you turn off the water,” he said.

But that’s exactly what earlier generations said about my own relatives, who arrived amid outbreaks of typhus, polio and tuberculosis in the late 1800s. Your ancestors probably encountered something like that, too, when they came to these shores. You’re dirty and diseased. Keep out.

But we’re Americans now, so we’re free to visit the same hatred on the next guy. According to Louisiana Gov. Bobby Jindal, whose own parents emigrated here from India, banning people coming from Ebola-affected countries is “an obvious step to protect public health in the United States.” In North Carolina, meanwhile, Senate candidate Thom Tillis said the only solution to Ebola was to “seal the border and secure it.”

He meant the border with Mexico, where sickly outsiders allegedly enter America to infect the body politic. Back in July, before the first Ebola case hit the United States, Georgia Rep. Phil Gingrey warned of “illegal migrants carrying deadly diseases such as swine flu, dengue fever, Ebola virus, and tuberculosis” across the border.

Pressed later by a journalist, Gingrey — who is a medical doctor by training — admitted that he didn’t know of any specific Ebola carriers coming from Mexico. But he didn’t have to know, either. The easiest way to stigmatize a group of foreigners is to label them as diseased. And we don’t let facts get in the way of that.

Start with the Irish, who were accused of spreading cholera through American cities in the early 1800s. Then came the Chinese, charged with bringing smallpox, leprosy and bubonic plague to California. Writing in 1862, one doctor warned that Chinese immigrants would “corrode the vitals of our strength and prosperity.” Indeed, he added, their threat to the public health was greater than if “the hordes of Genghis Khan should overflow the land.”

In 1900, after a Chinese man died of plague, health officials in San Francisco quarantined 25,000 Chinese residents in a 15-block section of the city. Chinese and Japanese travelers were barred from railroads unless they had received a newly developed — and largely untested — inoculation against the disease. At least one local newspaper suggested a simpler solution: burn down Chinatown. “Clear the foul spot from San Francisco,” the paper urged, “and give the debris to the flames.”

Then came the Italians, with their “low foreheads” and “weak chins,” as sociologist E. A. Ross wrote in 1914. Small wonder that they so often got sick, which threatened others with illness as well. In New York, Ross noted, Italian immigrants’ death rate was twice that of the general population.

Actually, as historian Alan Kraut has shown, the Italian mortality rate was lower than the New York average. Likewise, Jews — who were accused of spreading tuberculosis — had one of the lowest rates of death from the disease of any ethnic group. But anti-Semites continued to denounce them as sickly weaklings — “the polar opposite of our pioneer brand,” E.A. Ross scowled — who would supposedly weaken everyone else.

More recently, Haitian immigrants were one of the “4 H’s” — alongside homosexuals, heroin users and hemophiliacs — deemed at risk for AIDS by the Centers for Disease Control in 1983. As one physician admitted two years later, when the CDC removed Haitians from the list, they were “the only risk group that were identified because of who they were rather than what they did.”

But that’s been the historic pattern. And we’re witnessing it again, in the calls to keep out migrants from Ebola-affected nations in Africa. Of course we should screen visitors from these countries for the virus, as the CDC is already doing at five airports. And we should also work with African immigrant communities to help them identify people who might have been infected with Ebola or exposed to it.

But a blanket prohibition on travel from West Africa? That’s prejudice, plain and simple: It prejudges an entire group, based on the sickness of a small handful. And it echoes the kind of bigotry that my ancestors must have experienced when they arrived in the great wave of Jewish immigration over a century ago.

Each spring, I imagine, they repeated the same lines that I do at Passover: “The stranger that dwelleth with you shall be unto you as one born among you, and thou shalt love him as thyself; for ye were strangers in the land of Egypt.” So were almost all of us, in the land of America. How quickly we forget.

[Jonathan Zimmerman is a professor of history and education at New York University and author of “Too Hot to Handle: A Global History of Sex Education,” forthcoming from Princeton University Press. His commentary appeared in the Open Forum section of the San Francisco Chronicle.]