Ebola, Capitalism and the Idea of Society

The U.S.has sent soldiers to West Africa while Cuba has sent emergency health care workers. The difference is fundamental: Cuba sees both public purpose and moral imperative to help those stricken with Ebola and the U.S. sees a threat to profits at ‘home’ and a military exercise to ‘contain’ the spread of Ebola abroad. 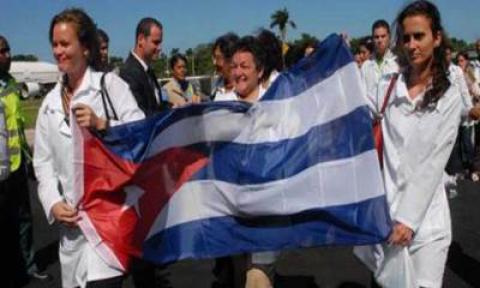 Cuba to Help with Ebola, The Maravipost

Thomas Duncan didn’t have health insurance when he entered Texas Health Presbyterian Hospital with Ebola. The hospital claims that he was initially turned away because important information about his condition didn’t find its way to the admitting physician. Without specific knowledge that he had Ebola a temperature of 103C didn’t require the hospital to admit him. With the two days it took the hospital to confirm Ebola on his return visit, Mr. Duncan risked hospital bills in the tens of thousands of dollars that he reportedly didn’t have. The hospital ‘risked’ providing expensive treatment to a man who likely couldn’t have paid for it.

Missing from this ‘process’ that now finds Mr. Duncan dead, two nurses who attended him with Ebola themselves, the American health care system revealed as wholly unprepared to deal with what at present seems a moderately communicable disease, is any notion of a public interest.  This can be seen internationally as well with the U.S. sending soldiers to West Africa while Cuba has sent a large contingent ofemergency health care workers. The difference is fundamental: Cuba sees both public purpose and moral imperative to help those stricken with Ebola and the U.S. sees a threat to profits at ‘home’ and a military exercise to ‘contain’ the spread of Ebola abroad.

Chart (1) above: what could have and should have been a quickly contained outbreak of Ebola through response by health care workers from rich countries was instead militarized and ignored. From the CIA using fake tuberculosis screening as a premise to gain intelligence to the history of ‘humanitarian’ interventions that slaughtered thousands to illicit pharmaceutical testing and dumping by Western drug manufacturers the nations of Africa have every reason to mistrust Western intentions there. This written, the only response that the U.S. apparently could muster was to send troops to ‘contain’ the crisis. Anyone with knowledge of Western imperial history in Africa should cringe at what the word ‘contain’ might be a euphemism for.  Source: WHO

At the more fundamental level the far ‘poorer’ Cuba sees health care and education as human rights for its citizens and for those of other countries. Despite claims of capitalist ‘efficiency,’ the U.S. has the worst health care outcomes among ‘developed’ countries at a price of twice or more per person.  Illustrated in the Texas case is the radical inefficiency of a health care system whose public purpose is subverted by the profit motive. With a fever of 103C Mr. Duncan was turned away but shitting and vomiting himself he was admitted. And lest this remain unclear, it isn’t until a clear emergency can be claimed that hospitals in the U.S. are mandated to provide treatment.

Even in capitalist economics the distinction was long ago made between ‘public’ goods that have social value, but that businesses are unwilling to provide, and ‘private’ goods whose production is best left to capitalists. This public / private frame had political leaders in the U.S. supporting public health programs paid for by the federal government, publicly funded schools and the building of the infrastructure that ultimately supported the ‘private’ economy and private profits. Whereas many of the ‘contracts’ for public programs went to private contractors, their historic purpose was public service and this was the measure of their success.

Graph (2) above: in the U.S. ‘private’ railroads were built with land grants (‘free’ land) from the federal government. Setting aside for the moment the goal of genocide against the indigenous population that was part of their motivation, by the end of the nineteenth century the accumulated fortunes of the railroad ‘barons’ were put forward as the bounty produced by capitalism.  Today many of the drugs being sold by ‘private’ health care companies were developed in government labs at public expense. And much of the health care infrastructure being increasingly privatized was developed either wholly or partially at public expense. Source:http://users.humboldt.edu/ogayle/hist383/CentralPacific.html

Beginning in the 1970s under Democrat Jimmy Carter what had formerly been considered quasi-public goods like transportation infrastructure was privatized under the theory that the capitalist profit motive produced more ‘efficient’ outcomes. With airlines and railroads heavily unionized at the time the major component of this ‘efficiency’ came through breaking organized labor and driving wages down. However, even in capitalist economics shifting wages to capitalists as profits is only ‘efficient’ if the increase in profits is greater than the wages lost.

What was lost in this shift was the sense of a public interest. The idea had always depended on dubious circumscription— class; race and imperial interests had left most of the world and much of the U.S. on the outside. What happened was that the private interest consumed the public interest. The railroads had been built through federal land grants and airlines flew mandatory routes to serve both public and private interests. By the 1970s the private fortunes built on this ‘partnership’ decided they wanted it all for themselves. That a Democrat President (Jimmy Carter) was behind the shift to the private takeover of the public realm ties Mr. Carter to Bill Clinton and Barack Obama as effective proponents of the neo-liberal program.

To tie this back to Cuba and the human rights view of health care and education, there was and remains no capitalist class in Cuba to subvert the public interest. The U.S. had public and private interests and the private interest consumed the public interest. Public health care and educational infrastructure were ‘public’ and served public purposes. Through privatization this public purpose has been subverted. As with the railroads and airlines, their public-private conception and the public-private resources that built them were simply taken by capitalists through privatization.

The idea that the profit motive produces ‘efficient’ outcomes in the public realm depends on redefining it. ‘Private’ drug companies didn’t develop an Ebola vaccine because doing so wasn’t estimated to be profitable. What state of the world must exist for such a vaccine to be profitable? An Ebola pandemic would provide the needed ‘customers’ to make it profitable. Stopping an epidemic and preventing it from becoming a pandemic is costly for ‘private’ interests with few profit opportunities from the direct ‘customers.’ But as was understood and inconveniently forgotten decades ago, what is ‘inefficient’ as capitalist enterprise is often astonishingly efficient as public policy.

Ebola has the public imagination because it is deadly and a horrific way to die. However, left out of press reports are the preventable and curable medical conditions that poor people face every day that go untreated. And what ‘Obamacare’ reinforced is the private takeover of the public interest for private gain.

Obamacare proceeds from the premise that health care exists to serve private interests by subsidizing ‘customers’ of private health care providers. Persons with health insurance who contract a communicable disease are forced into the ‘personal’ (‘private’) calculus of whether they can afford the insurance co-pays and deductibles of getting health care. And as ‘businesses’ health care providers calculate how to provide the most profitable health care, not the best. With stopping the spread of communicable diseases in the public interest, the profit ‘motive’ that in theory supports capitalist efficiency is the antithesis of social efficiency in the public realm.

The shift from public to private interests in the West isn’t an accident of history. It comes through bi-partisan support for the crudely ideological capitalism that re-emerged through the conflation of public and private interests. And in fact, this conflation has it perfectly backwards— private interests never served the public interest but private interests owe everything to this public interest from land grants to government research given / sold to ‘private’ corporations to bank bailouts. As Albert Camus had it in his book ‘The Plague,’ perhaps a modern plague will be the road back from the Western nation-states of the ‘self.’ But why should it come to that?