The Right to Live in Health and Cuban Health Care: The Ongoing Revolution (Review)

The crowning achievement of this multiracial and cross-class health activism was codification of the right to health in the 1940 Constitution. “Good health care...revolutionary medicine is far more cost effective than corporate-controlled medicine." 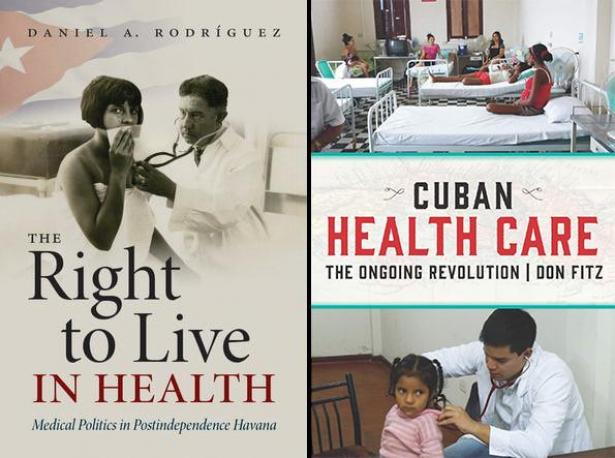 Cuban medicine has long captured the imagination of those living in the Americas. In the first three months of 2020 alone, the country created headlines in newspapers throughout the hemisphere. Candidates in the U.S. presidential primaries briefly battled over Bernie Sanders’ characterization of the Cuban healthcare system, Cuban doctors flew to serve in Covid-19 hotspots around the world (for which they were hailed as heroes or categorized as “slaves”), and hope was kindled when Cuba trumpeted a potential cure for the coronavirus, using Interferon Alpha-2B.

While competing interpretations of these events demonstrate that supporters and opponents of Cuba’s socialist government agree on little, one idea did not seem controversial: the Cuban medical system is fundamentally different from most others in the world. While explanations of this phenomenon are often superficial or focus only on the recent past, new publications by Daniel A. Rodríguez and Don Fitz demonstrate that there are deep historical roots to the island’s twenty-first century medical exceptionalism.

In The Right to Live in Health: Medical Politics in Postindependence Havana (University of North Carolina, 2020), Daniel A. Rodríguez provides a medical history of Cuba’s capital city from the last decade of the Cuban wars for independence (1890s) until the creation of the 1940 Constitution, one of the most progressive of its time. Rodríguez deftly weaves multiple scales of analysis—from the microbiological to the ideological to the economic—into his narrative. He clearly illustrates how, as Frank Snowden writes in The Conquest of Malaria, the history of medicine is not “an exotic subspeciality, but rather a central part of understanding modern…history.”

Rodríguez argues that as part of the broader anticolonial struggle, first against Spain and then against the United States, Cuban medical professionals created “an ambitious and far-reaching political project to join science and statecraft and secure health as a fundamental right of citizenship” (2). In the early years of the new republic, these actors–including practicing physicians, public health authorities, and nurses–worked within the U.S. military government’s public health apparatus. In the process, they subverted colonial goals, articulated an identity of medical nationalism, and called for more state action. The result was a flurry of national public health work, which, even though it often confronted significant administrative, political, and financial constraints, intervened in people’s lives and amplified the power of a fledging state.

The crowning achievement of this multiracial and cross-class health activism was the codification of the right to health in the 1940 Constitution.

The mostly white and middle-class medical professionals behind these initiatives often emphasized the idea that health was an individual responsibility and suggested targeted health interventions to reform the hygienic behavior of the mostly nonwhite and poor habaneros whom they served. However, the gospel of medical nationalism was not static. Rodríguez notes that interactions between popular and medical actors, despite being “fraught with multiple meanings,” proved “transformative for both” and “generated new expectations” (8). First, greater numbers of Cubans began to insist that health was a right, and, second, medical professionals increasingly understood that serious economic reform, not individual hygienic behavior, was needed to improve the health of the citizenry. Rodríguez concludes, “[B]y the late 1930s, these two threads finally came together: the robust ideal of state responsibility for health was increasingly interpreted as requiring economic interventions to address the central role that poverty played in creating the conditions for disease and death” (206). The crowning achievement of this multiracial and cross-class health activism was the codification of the right to health in the 1940 Constitution.

Rodríguez concludes by arguing that in Cuba medicine had “outsized importance in postindependence…politics and, conversely, [gave] the state outsized importance in the development of Cuban medicine” (202). The implications are twofold. First, the link between health and legitimacy began decades before the Cuban Revolution. Second, rather than being a phenomenon anchored initially and only in Europe and North America, Rodríguez persuasively asserts, “Latin America was a center for the articulation of new social rights in the twentieth century” (13).

Sitting among my tall stack of requisite academic reading, Rodriguez’s book was a breath of fresh air—he is a skillful writer, crafting a story with crisp prose and vivid detail, without sacrificing sophisticated argumentation and empirical depth. The latter is the foremost strength of his book. He has gathered an impressive array of medical and non-medical sources from multiple archives in Havana and the United States and has interpreted them in creative ways. For example, Rodríguez notes that “[a]ll statistics tell stories,” and he successfully cracks them apart to reveal human experience (148). For example, he pairs mortality data from a monthly health bulletin with visiting nurse reports and photographs of tenement houses and clinics in order to create a detailed portrait of how gender, racial, and class inequality shaped the epidemiological landscape of tuberculosis in Havana. Sources authored by working-class Cubans in this era are incredibly scarce, but Rodríguez centers their voices wherever possible. He scours physicians’ reports to find information about patient behavior and attitudes in order to better understand their perspectives and agency.

Some readers may desire a more systematic account of how state policies and practices changed over each administration. But Rodríguez’s more thematic-based organization allows other social and cultural dynamics to emerge, ones defined not by presidents and senators, but by nurses, Spanish mutual societies, labor unions, Afro-Cuban civic clubs, and working mothers. The Right to Live in Health will engage both popular and academic audiences. It will resonate with undergraduate and graduate students and can be assigned as an entire book or be read as vignettes on a chapter-by-chapter basis.

While Rodriguez’s narrative ends with the pathbreaking Constitution of 1940, Don Fitz’s Cuban Health Care: The Ongoing Revolution (Monthly Review, 2020) begins roughly two decades later, with the Cuban Revolution of 1959. He presents a synthesis of the socialist government’s medical politics, domestic healthcare programs, and international medical diplomacy. Fitz contends that the Cuban medical system, developed through decades of experimentation and improvement, represents a model worthy of emulation throughout the world. As early as the 1960s, he posits, “the Cuban Revolution shows that when limited resources are distributed equitably, medical miracles can happen” (47). According to Fitz, that lesson remains even more relevant today, and especially in comparison with the U.S. model. He contends, “Good health care is not more expensive—revolutionary medicine is far more cost effective than corporate-controlled medicine!” (209)

Fitz also emphasizes that Cuba’s medical system is distinctive because it has emerged out of a dialectical, biopolitical process.

Fitz also emphasizes that Cuba’s medical system is distinctive because it has emerged out of a dialectical, biopolitical process. “The initial stage of medical transformation in Cuba,” Fitz argues, “involved the expansion not just of care but of medical consciousness, which became a material force shaping the country’s health system” (9). He concludes that too many try to enact change “by focusing on the construction of things,” and instead “it is actually the emergence and consolidation of a new consciousness that is critical” (241).

Fitz’s chapters are organized chronologically and thematical. They cover topics including the medical work of the Cuban doctors who did not go into exile in the first years after the Revolution, the birth of the Cuban version of the polyclinic (a medical facility offering outpatient services) in the mid-1960s, and the first doctors to serve in Cuba’s military intervention in Africa in the 1960s. Fitz goes on to recount the redesign of the polyclinic and the emergence of the Family Doctor/Nurse program in the 1970s and 1980s, and Cuban physicians’ experiences in the Angola campaign. Subsequent chapters cover the HIV/AIDS crisis, the economic collapse caused by the dissolution of the Soviet Union, the Latin American School of Medicine (ELAM), Cuba’s contemporary medical missions, and lessons from Cuban medicine for the twenty-first century.

I particularly enjoyed the chapters on ELAM. Journalists have provided cursory overviews of the school, but Fitz has moved in the right direction of providing more in-depth data. For example, he profiles a subset of students, looking at why they chose to attend ELAM, what political context they will face when they return home, and what their desired career path is after graduation.

Cuban Health Care is based on interviews of Cuban health practitioners and existing secondary literature. Rightly or wrongly, scholars who work with oral history often have to delineate the weaknesses and strengths of their source base. This is perhaps even more necessary for the case of Cuba, where some may claim that political censorship could have impacted the interview process, especially for Cubans employed by the state. A more thorough discussion of the potential pitfalls of relying on this type of source, even if only to discredit such claims, would have made Fitz’s arguments more persuasive. Nonetheless, in offering a clear overview of the distinct periods of Cuban medicine after 1959, and by contrasting Cuba’s national health system with that of the United States, Fitz’s Cuban Health Care will appeal to readers unfamiliar with the subject matter and will work well in a number of academic courses, such as historical survey classes and interdisciplinary seminars concerned with health policy.

The Right to Live in Health and Cuban Health Care, when read together, historicize Cuba’s pathbreaking medical system. In particular, Rodríguez argues convincingly that what is often considered to be a product of revolutionary Cuba was instead a legacy of the early twentieth century. The two books also suggest lessons about how to create more equitable healthcare systems in other nations. Cuba’s medical innovations have relied not only, or even primarily, on state action, and instead have been driven by the efforts of medical professionals and the activism of “ordinary” citizens. While observers often focus on Cuba’s health infrastructure and policies, Rodríguez and Fitz instead emphasize consciousness and ideology. These two books show that throughout the twentieth century, Cubans voiced new demands and prioritized specific values, and, as a result, crafted a revolutionary healthcare system.

Kelly Urban is Assistant Professor of Latin American History at the University of South Alabama. Her research focuses on public health, state building, and citizen activism in the twentieth-century Caribbean. Her book manuscript, Politicosis, is a history of tuberculosis control in Cuba from 1925–1980.