Your Nose Knows Death is Imminent

Losing the sense of smell predicts likelihood of death within five years, according to new research. 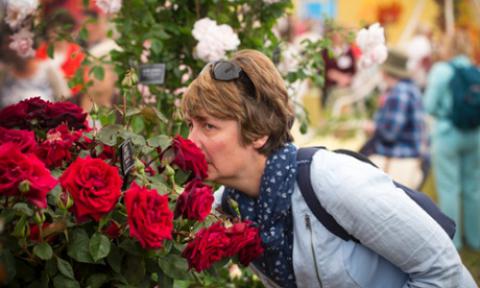 A visitor smells the aroma of a rose at the Hampton Court Palace Flower Show. ,David Levene / The Guardian

Until as recently as 1987, British coal pits employed caged canaries as sentinels that alerted miners to the presence of poisonous gases. Being more sensitive to them than we are, the birds would get distressed before the gases reached levels that are dangerous to humans, giving the miners time to evacuate and avoid suffocation.

According to new research, the sense of smell is the canary in the coalmine of human health. A study published today in the open access journal PLOS ONE, shows that losing one’s sense of smell strongly predicts death within five years, suggesting that the nose knows when death is imminent, and that smell may serve as a bellwether for the overall state of the body, or as a marker for exposure to environmental toxins.

The study involved more than 3,000 participants, all of them between 57 and 85 years old, from the National Social Life, Health, and Aging Project (NSHAP), a longitudinal study of factors affecting the well-being of older people living in America.

In 2005-6, Jayant Pinto of the University of Chicago and his colleagues asked all the participants to perform a simple test that involved identifying five common odours (rose, leather, fish, orange, and peppermint), using the number of incorrectly identified odours as a score of the severity of smell loss.

Five years later, the researchers tracked down as many of the same participants as they could, and asked them to perform this smell test a second time. During the five-year gap between the two tests, 430 of the original participants (or 12.5% of the total number) had died. Of these, 39% who had failed the first smell test died before the second test, compared to 19% of those who had moderate smell loss on the first test, and just 10% of those with a healthy sense of smell.

In other words, those participants who failed the first smell test completely were four times as likely to die within five years than those who correctly identified all five odours. This held true when other factors known to impact smell - such as race, sex, mental illness, and socioeconomic status - were taken into account, and even milder smell loss was associated with slightly increased odds of impending death.

Loss of the sense of smell predicted death more accurately than did a diagnosis of cancer, heart failure or lung disease, the only other common cause of predicting it more accurately being severe liver damage. But the researchers stress that it is unlikely to be a cause of death itself, arguing only that it is a harbinger for what is to come, and suggesting two possible reasons why this might be so.

The tip of the olfactory nerve, which contains the smell receptors, is the only part of the human nervous system that is continuously regenerated by stem cells. The production of new smell cells declines with age, and this is associated with a gradual reduction in our ability to detect and discriminate odours. Loss of smell may indicate that the body is entering a state of disrepair, and is no longer capable of repairing itself.

The olfactory nerve is also the only part of the nervous system that is exposed to the open air. As such, it offers poisons and pathogens a quick route into the brain, and so losing smell could be an early warning of something that will ultimately cause death.

Pinto and his colleagues did not examine the actual causes of the 430 participants’ deaths, but say that this information would be valuable for exploring the link further. They believe the 3-minute smell test they used is less reliable than a longer clinical assessment and, therefore, that the link may be even stronger than their results would suggest. They don’t know if the results also apply to younger people, but if they stand up to further scrutiny, they could provide a quick way of identifying older ones who are at risk.