The economic divide in the world is astounding: The top 1 percent control 48.2 percent of global assets. 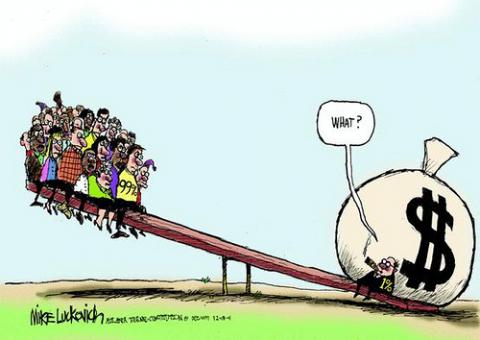 With wealth rising at probably the fastest pace on record, the world’s richest 1 percent own nearly 50 percent of global assets.

North America is the region with the largest share of total wealth – 34.7 percent – followed by Europe, with its larger population, accounting for 32.4 percent. Forty-one percent of the world’s millionaires reside in the United States.

Over the past year, total wealth increased 8.3 percent worldwide, buoyed by a strong housing market and stock market prices.

The economic divide in the world is astounding:

· The richest 10 percent of adults own 87 percent of the world’s wealth.

The Credit Suisse report does not discuss political and moral concerns about global inequality. But it does suggest that the rising inequality is bad for the world’s economy.

The report notes, for instance, that that wealth is growing at a faster pace than disposable income. Today’s ratio of wealth to income basically matches that of the Great Depression. “This is a worrying signal given that abnormally high wealth income ratios have always signaled recession in the past,” the report says.

French economist Thomas Piketty, in his bestseller “Capital,” suggests that inequality is inherent in capitalism, and expresses concern over the fact that capital has grown at a faster rate that the growth of the economy in recent years. He warns that the accompanying growing inequality threatens our long-term political stability.

Years of neo-liberal policies and austerity in Europe and the United States have fueled inequality. This process has been accompanied by a restructuring of the economy so that stagnant wages, poorly-paid jobs and long-term employment instability have become the norm.

But growing inequities of income and wealth does not generally concern conservatives.

They argue that that inequality does not matter as long as our living standards are increasing. From a social Darwinist perspective, they justify inequality, contending that the wealthy deserve what they earn because of their contribution to the economy. The conservative view seems particularly callous in light of the depth of global poverty in the Third World.

But progressives and many economists point out that excessive inequality is bad for the economy because the accumulation of capital is not accompanied by enough investment to spur strong economic growth. Indeed, corporations are now hoarding capital. Inequality, furthermore, harms the economy by causing a reduction of the purchasing power of the poor and middle class. The skyrocketing social divide undermines people’s faith in democracy and results in economic instability.

“Inequality will be a fact of economic life in the foreseeable future,” said Marshall Steinbaum, a research economist at the Washington Center for Equitable Growth. “It means that in the future, children who don’t come from wealthy families will be stuck in place.”