The PRD, which Cardenas helped found in 1989, rules Guerrero state and the city of Iguala, where the government said 43 trainee teachers were abducted by police on the night of Sept. 26 and apparently handed over to a drug gang and killed. 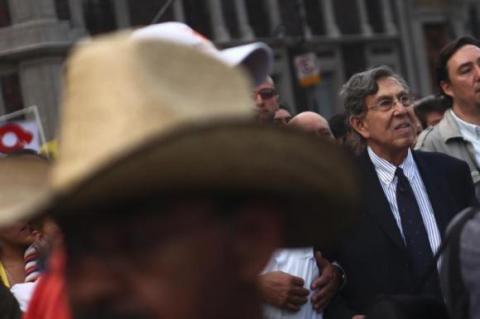 Cuauhtemoc Cardenas (R), founder of the Party of the Democratic Revolution (PRD) takes part during a march to protest against the privatization of the state-oil monopoly Pemex at Zocalo square in Mexico City, January 31, 2014. , Credit: Reuters/Edgard Garrido

(Reuters) - The elder statesman of Mexico's main leftist party said on Sunday the group was on the verge of falling apart after a series of mistakes and the disappearance of 43 students in a state it runs in the southwest of the country.

In an open letter published by his office, Cardenas, 80, said the PRD was "on the verge of dissolving, or ending up as a simple political-electoral franchise subordinate to interests alien to those of the broad base of its members."

Cardenas, the son of former president Lazaro Cardenas, a leftist icon who nationalized Mexico's oil industry in 1938, called on the party leadership to step down to allow a process of reconstruction to begin.

The PRD, which Cardenas helped found in 1989, rules Guerrero state and the city of Iguala, where the government said 43 trainee teachers were abducted by police on the night of Sept. 26 and apparently handed over to a drug gang and killed.

Six more people, including three other trainee teachers, were killed in clashes in Iguala with police and gunmen that night.

The government has accused the arrested PRD mayor of Iguala of masterminding the student abductions with his wife because they were deemed troublemakers and a threat to his power. The PRD governor of Guerrero has also stood down over the scandal.

The fate of the students has shaken the administration of President Enrique Pena Nieto and battered the reputation of the PRD, whose candidate Andres Manuel Lopez Obrador came within a whisker of winning the 2006 presidential election.

Despite the blow the Iguala crisis has delivered to Pena Nieto's Institutional Revolutionary Party, or PRI, the PRD and the National Action Party (PAN), the main center-right opposition, are both divided and hemorrhaging support.

Pena Nieto, who ended the 75-year-old state oil and gas monopoly last year, persuaded both the PRD and the PAN to back him on a raft of economic reforms. That prompted a number of PAN and PRD loyalists to complain their parties had sold out.