On the eve of the latest United Nations Climate Summit in Lima, Peru, even the New York Times noted November 30 that scientists and climate-policy experts "warn that it now may be impossible to prevent the temperature of the planet's atmosphere from rising by 3.6 degrees Fahrenheit. With so much at much at stake, why have world leaders done so little to embrace comprehensive, mandatory solutions, relying instead on modest, market-based proposals for voluntary reductions? 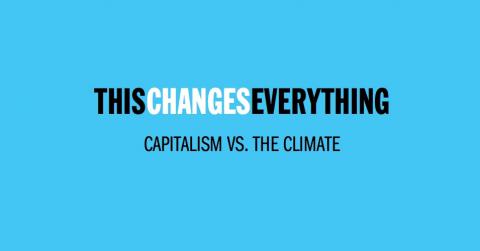 On a recent installment of the HBO series, "The Newsroom," a fictional top Environmental Protection Agency scientist horrifies even the grim faced news anchor Will McAvoy with the pronouncement that the fight against climate change is already lost.

"If we face this problem head on, if we listen to our best scientists, and act decisively, and passionately, I still don't see any way we can survive," intones the EPA official, predicting "mass migration, food and water shortages, spread of deadly disease, endless wildfires, storms that have the power to level cities, blacken the sky and create permanent darkness."

"Newsroom" creator Aaron Sorkin was no doubt trying to shock viewers who have become numb to a frequent real news reports about the climate crisis that, if not at the level of the overly dramatized civilization collapse, are certainly cause for alarm.

On the eve of the latest United Nations Climate Summit in Lima, Peru, even the more staid New York Times noted November 30 that scientists and climate-policy experts "warn that it now may be impossible to prevent the temperature of the planet's atmosphere from rising by 3.6 degrees Fahrenheit. According to a large body of scientific research, that is the tipping point at which the world will be locked into a near-term future of drought, food and water shortages, melting ice sheets, shrinking glaciers, rising sea levels and widespread flooding - events that could harm the world's population and economy."

With so much at much at stake, why have world leaders done so little to embrace comprehensive, mandatory solutions, relying instead on modest, market-based proposals for voluntary reductions in greenhouse gas emissions?

To answer that question, it's worth taking a fresh look at one of the most important books of the year, Naomi Klein's "This Changes Every Thing."

To Klein, the two-ton elephant in the room is not just global warming, it's the global economy, or as she puts it, the "free market orthodoxies that threaten our capacity to respond boldly to this crisis."

"What is really preventing us from putting out the fire that is threatening to burn down our collective house?" Klein asks. "We have not done the things that are necessary to lower emissions because those things fundamentally conflict with deregulated capitalism, the reining ideology for the entire period we have been struggling to find a way out of this crisis."

To Klein, the policy pillars of this era should be "familiar to us all: privatization of the public sphere, deregulation of the corporate sector, and lower corporate taxation, paid for with cuts to public spending." Or to put it another way, "the core of the problem comes back to the same inescapable fact that has both blocked climate action and accelerated emissions: all of us are living in the world that neoliberalism built."

But the origins of the climate crisis go farther back, she asserts, to an "ideology of extractivism" - a term describing the removal of raw materials from the earth, usually by colonial powers for profit, that are intrinsic to the origins of our present economic system.

Extractivism, says Klein, means subverting nature to being a commodity to be exploited by humans, but also "the reduction of human beings into labor to be brutally extracted" or pushed into what she calls "sacrifice zones" of massive decimation. Coal production is what might be called the original sin, and coal's "earliest casualties - the miners who died from black lung - an early warning that we were unleashing a poisonous substance onto the world."

Moving forward to today, Klein notes the iron grip of corporations, especially those in the energy extraction sector, that dominate global economies and political structures. "In virtually every country, the political class accepts the premise that it is not the place of government to tell large corporations what they can and cannot do, even when public health and welfare - indeed the habitability of our shared home - are clearly at stake."

One of the best signposts is the contrast Klein emphasizes between global trade pacts and global climate agreements. "Commitments made in the climate negotiations all effectively functioned on the honor system, with a weak and unthreatening mechanism to penalize countries that failed to keep their promises. The commitments made under trade agreements, however, were enforced by a dispute settlement system with real teeth, and failure to comply would land governments in trade court, often facing harsh penalties." Why? The trade pacts benefit global capital, including many of the same corporations that oppose meaningful climate controls.

Comprehensive climate action remains buried under obeisance to corporate interests and massive corporate lobbying. That's the same oil and gas giants that spent nearly $400,000 a day in 2013 alone lobbying Congress and government officials and who have "grown so accustomed to operating in regions where they are economically omnipotent that they treat politicians as their unofficial PR wings and judiciaries as their own personal legal departments."

In Washington, says Klein, climate action has failed or the same reasons "that serious financial sector reform didn't pass after the 2008 meltdown," that "gun reform didn't pass" after the horrific Newton, Ct. shootings, and why "Obama's health reform failed to take on the perverting influence of the medical insurance and pharmaceutical companies. because large corporations wield far too much political power."

One way to challenge that corporate influence that is under stated by Klein is the devastating health consequences of climate change. Klein offers only brief references to health effects of climate change and the corporate grip blocking substantive solutions. One glaring example she cites is a Canadian doctor who was vilified by both Canadian health regulators and a major physicians association for exposing "alarming numbers of cancers, including extremely rare and aggressive bile-duct malignancies" in the tar sands producing region of Alberta, Canada.

A recent report on "The Climate Crisis and the Global Threat to Human Health" by the Cornell Global Labor Institute in collaboration with NNU documents the widespread ways in which climate change adversely affects human health.

These include vector-borne diseases, from malaria to Ebola, extreme weather events that lead to death, injuries, toxic contamination, and the spread of infectious diseases and mental health disorders, food shortages and nutrition insecurity linked to droughts and flooding, respiratory and pulmonary diseases linked to wildfires, and heat related strokes.

Unlike the somber EPA official in "The Newsroom," Klein does see openings for stemming the global catastrophe. She notes, for example, the global emergence of grassroots, broadly based movements of activists who have confronted the climate destroyers in such disparate locations as a tourist destination in Greece, a First Nation in eastern Canada, the Niger Delta region, the Russian Arctic, the widespread protests over the proposed Keystone XL pipeline, and the massive climate march in New York in September that drew 400,000 people, far more than expected.

Historic fights against slavery and colonialism were also viewed as daunting, but became the genesis of winning social change movements, Klein notes. Moreover, the inextricable link between the climate crisis and the global economic crisis, offer an opportunity to build broad-based, social movements to effectively challenge both, she concludes.

Klein cites the writing of slavery historian David Brion Davis who observed "abolitionists understood their role was not merely to ban an abhorrent practice but to change the deeply entrenched values that had made slavery acceptable in the first place."

"Only mass social movements can save us now," writes Klein. "We will not win the battle for a stable climate by arguing, for instance, that it is more cost-effective to invest in emission reduction now than disaster response later. We will win by asserting that such calculations are morally monstrous since they imply that there is an acceptable price for allowing entire countries to disappear."

The global economic crash of the past decade has heightened opposition to "market fundamentalism," Klein maintains, as seen in multiple forms, such as student movements of Chile and Quebec, Occupy Wall Street actions, and a "squares movement" that saw city centers taken over by demonstrators for months.

That's the hope she ends with. "It is slowly dawning on a great many of us that no one is going to step in and fix this crisis. If change is to take place it will only be because leadership bubbled up from below."

Thanks to the author for sending this review to Portside.