An evolutionary arms race keeps humans and bacteria right where they started. 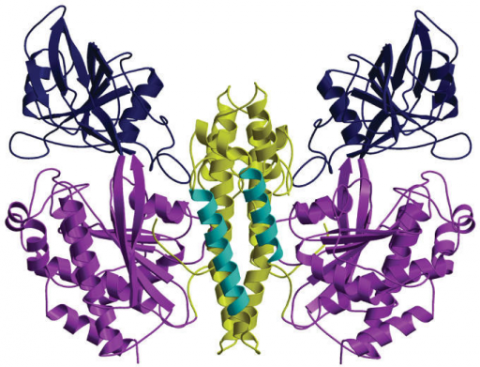 ransferrin, and the iron it carries, are brought inside human cells by this receptor., NIH

Bacteria, like all living things, need iron for a variety of biochemical functions. Humans and other higher order organisms have plenty of iron; we limit bacterial access to it as a means of defending against bacterial infection. So when we need to transfer iron throughout our bodies, we keep it tightly sequestered in a protein called transferrin.

In order to infect us, bacterial pathogens must try to wrest that iron away; they have specialized transferrin binding proteins (Tbps) to do just that. Recent work demonstrates that transferrin "is engaged in ancient and ongoing evolutionary conflicts" with one of these Tbps, TbpA.

By comparing the genetic sequence of transferrin across twenty-one different primate species, researchers found that transferrin has undergone positive evolutionary selection in a manner often seen in molecular arms races between mammals and viruses. Fourteen of the sixteen rapidly evolving sites identified in transferrin are in amino acids that form direct contact with TbpA from bacterial all-stars like Neisseria meningitidis, which causes meningitis; Neisseria gonorrhoeae, which causes gonorrhea; and Haemophilus influenzae, which can cause pneumonia.

TbpA from these bugs can bind transferrin from humans and gorillas, but not from our next closest relatives the chimpanzees. Since the transferrin to which a given bacteria's Tbp can bind—and therefore, from which it can swipe a valuable iron molecule—is thought to dictate its host range, it seems plausible that positive selection in primate transferrin was mediated by interactions with an early form of this Tbp.

There are two common versions of the human transferrin gene—a major allele and a minor allele—which differ at a single nucleotide. Each creates a functional protein, with no discernible difference in their ability to bind iron. The more common variant (the major allele) has the same nucleotide in this position as chimpanzees, squirrel monkeys, and dusky titi monkeys. The less common variant (the minor allele) is found in between six and twenty-six percent of the human population, depending on geography. It has the same nucleotide in this position as Siamong gibbons, olive baboons, colobus monkeys, Spinx's tamarins, and night monkeys.

TbpA from Haemophilus influenzae was not able to bind the minor allele nearly as well as it bound the major allele; if this less common variant provides protection from infection, that could explain why it is still around. TbpA from Neisseria meningitidis and Neisseria gonorrhoeae could bind to both of these alleles of transferrin equally strongly, but neither could stick as strongly as Haemophilus influenzae's TbpA. So TbpA could be under positive selection too; different versions may balancing their affinity for one particular transferrin against the ability to bind a number of different transferrins.

Alice Liddell first encounters the Red Queen in Chapter 2 of Through the Looking Glass. Alice tries to catch her, but although they each run faster and faster, neither of them ever gets anywhere. They must run and run just to stay where they are. The evolutionary biologist Leigh Van Valen was thus inspired to call his theory of evolutionary arms races the Red Queen hypothesis; predator and prey, or host and pathogen, always co-evolve in tandem so neither one ever gets ahead of the other.

Bacterial TbpA mutates to try to snatch the iron from primate transferrin, and transferrin mutates to teasingly hold the iron out of TbpA's reach. On and on. Neither one keeps the upper hand for long; everyone keeps evolving but ends up staying right where they are.