Yesterday Vermont Gov. Peter Shumlin declared "now is not the right time" to proceed with any fundamental overhaul of health care financing and delivery in Vermont. He claimed the latest cost estimates for what's known locally as Green Mountain Care (GMC) were higher than originally projected, in a period when "slower recovery from the great recession has tightened the state budget. What Shumlin has championed for nearly five years was "just not affordable" anymore. 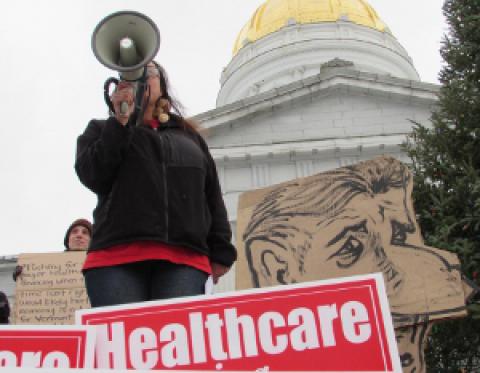 SHAME ON SHUMLIN - Shela Linton of Brattleboro leads the chant "Shame on Shumlin" at the Statehouse Dec. 18, the day after Gov. Peter Shumlin announced he would drop the single payer system for health care this Legislative session., Montpelier The Bridge

"Vermont is the only state with universal single-payer health coverage for its residents."

James Fallows in The Atlantic, April, 2014

For nearly four years, Vermont Governor Peter Shumlin has been basking in the glow of press accolades like the one above.

Unfortunately, what was often misreported nationally as a done deal was far from it, in Montpelier, the state's capital.

Top Democrats in the legislature were, in reality, not enthusiastic about providing tax-supported universal coverage. Shumlin's postponement of key financing decisions until after his re-election this fall reflected his own ambivalence about the cost and complexity of the project.

On Wednesday, December 17, the governor called a statehouse press conference to make a "major announcement." That turned out to be good news for single payer foes locally and nationally-and bad news for campaigners to make "health care a human right."

Shumlin declared that "now is not the right time" to proceed with any fundamental overhaul of health care financing and delivery in Vermont. He claimed that the latest cost estimates for what's known locally as Green Mountain Care (GMC) were higher than the $2 billion originally projected. GMC would create an "enormous" additional tax burden and high "risk of economic shock," in a period when a "slower recovery from the great recession has tightened our state budget."

In short, the approach Shumlin has championed for nearly five years was "just not affordable" anymore. (For more on the governor's reasoning, see here.)

What Shumlin called "the greatest disappointment of my political life" is, more importantly, a setback for single-payer efforts in  other states, including California. Frustrated and disappointed by Obamacare, health care reformers have been drawing much inspiration from the effort to transcend its limitations in Vermont.

The Vermont Workers Center (VWC), a leading catalyst for real reform, fired back with a protest rally, in Montpelier, less than 24-hours after Shumlin's announcement. VWC leaders denounced the governor for an "undemocratic decision" made "behind closed doors in close consultation with a select group of businesses" but "without public participation or broader input." As the VWC noted:

"We all currently pay for hodgepodge healthcare system-we just don't pay in a way that leads to giving people access to care. Moving to a different financing mechanism has nothing to do with raising new money. Vermont's businesses currently pay 80% of all private insurance premiums. Individuals who fall sick also pay a big chunk-through roughly $800 million in out-of-pocket costs. The governor's task was to shift private payments to a more equitable, public financing mechanism. His task was not to find new money." 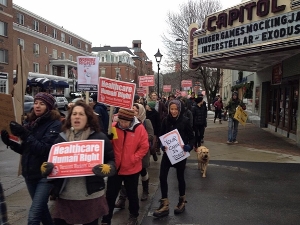 In addition to its other political fall-out, Shumlin's surrender has made the task of running against Hillary Clinton a bit harder for U.S. Senator Bernie Sanders. Sanders has been touting Vermont's singular progress toward single payer during his out-of-state trips to explore a possible 2015-16 presidential campaign. Vermont's independent socialist is reportedly nearing an official announcement of his candidacy. Despite Sanders' past support for Shumlin's three gubernatorial campaigns, the governor is expected to back Clinton, not the state's 73-year old junior senator, for the presidency.

Potholes in the Single-Payer Road

GMC enabling legislation was passed, with nationwide publicity and much local enthusiasm, after Shumlin was first elected in 2010. Act 48 committed his state to developing a first-in-the-nation approximation of a single-payer system covering all 640,000 Vermonters.

As I reported then (and later in Save Our Unions: Dispatches from a Movement in Distress), many potholes remained in the road to actual implementation of Green Mountain Care. It required a multi-year process fraught with potential financing disputes, technical and legal problems, and related political dangers for all involved.

Those most responsible for passage of Act 48-the grassroots labor, community, and health care reform mobilizers led by the Burlington-based VWC-worried, with good reason, that Shumlin and key Democratic legislators would lose their will or their way.

Obamacare gave them a big opening to do this, along with much fodder for conservative foes of single payer. Vermont was forced to set up an insurance change and operate that for three years--with all of the Affordable Care Act's attendant discrediting mishaps-before seeking a federal waiver in 2017 permitting its preferred single-payer approach.

This unhelpfully delayed any direct move toward elimination of private insurers, replacement of job-based medical coverage in the private sector, and consolidation the various tax-supported health insurance plans covering children, low-income Vermonters, and public employees-a major transition challenge on all fronts, whether undertaken sooner or later.

Plus, the enabling language of Act 48, passed in 2011, left many important details undecided, including who would pay what for Vermont's post-ACA system. In the last two legislative sessions, the VWC has consistently argued that financing costs "be shared equitably, which means that richer people-and more profitable companies-should pay proportionately more into the health care system than poorer people."

Shumlin, in contrast, has been quite wary about raising taxes on big corporations or the wealthy. (His own net worth was estimated at $10 million when he was first elected.) The governor has framed his push for Green Mountain Care, quite conservatively, as a boon for business, declaring at a re-election rally in September that "we are moving forward on the nation's first single payer health care system that contains costs, takes the burden off of employers, and simplifies the system for all Vermonters."

Later that month, he sounded a bit more tentative, telling a radio audience: "If we come up with a financing plan that doesn't grow jobs, economic opportunity, and make Vermont more prosperous, trust me, we're not gonna do it." In the same interview, he declared himself to be "one of the most pro-business, anti-tax governors that you've seen in a long time."

Unfortunately, on November 4, this Republican-lite routine didn't play well at the polls. Much to his shock and dismay, Shumlin was nearly defeated by his conservative GOP opponent, Scott Milne. (Shumlin beat Milne by less than 2,500 votes, with a Libertarian candidate draining more than 8,000 votes from his opponent.)

During their race, Milne insisted that Green Mountain Care was already "dead" and that the governor was just waiting until after the election to make that official. As it turns out, Milne was wrong because Shumlin's own re-election will not be finalized until the Democrat-dominated legislature meets on January 8 to pick the next governor, a process used in Vermont when no candidate wins more than 50 percent of the popular vote.

The single payer movement also failed to get a boost from the race for lieutenant governor. The personally popular incumbent, Republican Phil Scott, defeated Dean Corren, a Vermont Progressive Party (VPP) candidate who ran with Shumlin's backing but not that of leading State Senate Democrats, who backed Scott, a GMC critic. Corren's 36% of the vote was the highest statewide showing by any Vermont Progressive other than Sanders in his ten federal races. Corren accused Scott and his bi-partisan supporters of undermining "single payer by spreading fear and uncertainty" rather than "actually figuring out how to do this."

The VPP's pro-single payer legislative candidates fared much better, giving the party its largest-ever presence in Montpelier next month. Vermont Progressives increased their caucus in the state House of Representatives from 5 to 7 members, while maintaining three seats in the 30-member Vermont Senate. Overall, the nation's most successful third party ran 22 candidates this fall. State VPP chair Emma Mulvaney Stanak, a teachers' union organizer, hailed her party's progress as a sign that Vermonters "are increasingly tired of this stale, two-party system and are voting for alternatives."

After the election, Shumlin began back-peddling from his own much-touted, state-level alternative to the ACA. His administration postponed a Nov. 22 briefing about its proposals for Green Mountain Care. VWC supporters around the state began mobilizing for meetings scheduled for Dec. 4, 11, and 18 by the GMC Board, to solicit public comment.

VWC board member Ellen Schwartz from Brattleboro and others began to sound the alarm. "Unless thousands of us make our voices heard, it is unlikely that the Gov. Shumlin's proposed plan will remedy critical flaws of the existing insurance system, " she informed readers of VTDigger, a local political blog. ""Unless we act, his proposal for health care benefits may well impose out-of-pocket costs, creating barriers to care. It is also likely to continue to exclude the very services that people are saying they need."

The VWC criticized Shumlin's apparent tilt toward a flat payroll tax to fund the new system. The Workers' Center renewed its call for a system of "equitable financing" that would replace deductibles, co-pays, and premiums paid by individuals or shared by employers and employees. VWC financing proposals included "taxes on earned and unearned income, a wealth tax and a progressive payroll tax for employers only, with exemptions for the smallest businesses."

A Protest In Montpelier

On Thursday in Montpelier, more than one hundred Vermonters turned out, on short notice, for the VWC-organized demonstration against the governor's decision. Among those protesting on the state house steps were supporters of the Communications Workers of America and International Brotherhood of Electrical Workers. For two months, 1,800 CWA and IBEW members have been on strike against FairPoint Communications, a troubled telecom firm that took over from Verizon in Vermont, Maine, and New Hampshire six years ago.

Health care cost shifting is one of main contract concessions these workers are resisting. Some old-timers among them went through a grueling four- month work stoppage over the same issue in 1989, when the local phone company in New England was known as NYNEX (later to become Verizon). The passage of the Affordable Care Act four years ago has done little or nothing to relieve management pressure on unions for medical benefit givebacks of the sort which triggered both strikes, a quarter century apart.

Through the Workers Center and Progressive Party, many Vermont union activists, including some strikers, have been vigorous advocates of Green Mountain Care because it would get health insurance off the bargaining table. Until this week, they knew Governor Shumlin was a shaky ally at best.

Now, it's much clearer which side he's on and what price they may end up paying, along with other Vermont workers, for long overdue change now deemed to be "premature." Shumlin can rest assured that he's not the only one "disappointed" by his sudden capitulation to the status quo, aided and abetted by key Democrats in the state legislature.

[Steve Early has been writing about Vermont politics since 1968, when he was a college student in the state. He is a former organizer for the Communications Workers of America in New England and the author, most recently, of Save Our Unions: Dispatches from a Movement in Distress, from Monthly Review Press. The book reports on single payer campaigning and third party building in Vermont. He can be reached at Lsupport@aol.com]