Established in 1930 after a schism within the Jewish socialist Workmen's Circle, the IWO's founding members came from the ranks of prominent leaders of the American communist movement. Supporting the left wing of the New Deal, IWO leaders hoped that once workers came to see state-supported healthcare, unemployment insurance, and minimum wage as a right, they would work to put the Communist Party at the helm of a worker-led American revolution. 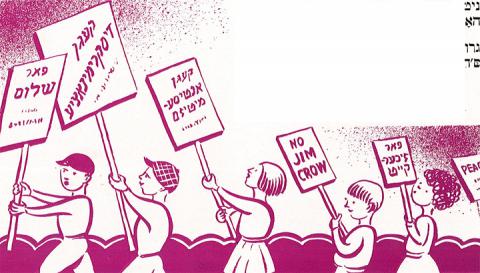 Reproduced from the October 1949 issue of Yungvarg, the IWO Yiddish children's magazine., Courtesy of YIVO Institute for Jewish Research.

On an evening in late February, 1941, almost six thousand people gathered in midtown Manhattan to attend a performance entitled "The Negro in American Life." Sponsored by the International Workers Order (IWO) to celebrate the order's eleventh anniversary, the show was written by black playwright Carlton Moss, and featured a pageant of black heroes from American history, including Frederick Douglass, Harriet Tubman, and Langston Hughes. The event concluded with a choral performance of the IWO's unofficial anthem, the cantata "Ballad for Americans," with soloist Paul Robeson. Musically narrating the story of American democracy from 1776 onwards, the ballad's narrator invokes Lincoln and proclaims, "[a] man in white skin can never be free / while his black brother is in slavery . . ." Interrogating the narrator, the chorus repeatedly asks him, "Say, we still don't know who you are, mister . . . are you an American?" until the narrator finally declares, "Am I an American . . . ?! I'm just an Irish, Negro, Jewish, Italian . . . Spanish, Russian . . . Czech and double-check American!" The cantata's lyrics outlined and emphasized the IWO's political philosophy: fighting against Jim Crow benefited whites as much as blacks, and white ethnic groups had the responsibility to resist assimilation as part of the central battle against capitalism's power to "alienate, discriminate, and segregate." The real struggle against capitalism could only begin once true unity among races could be achieved. 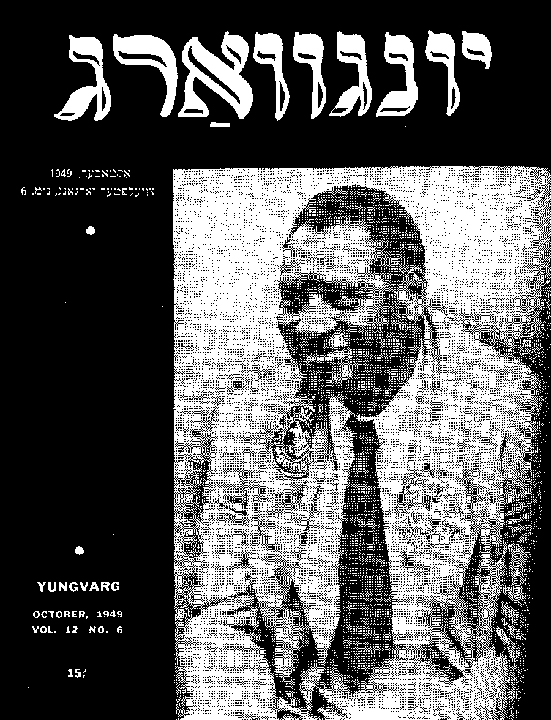 Reproduced from the October 1949 issue of Yungvarg, the IWO Yiddish children's magazine. Courtesy of YIVO Institute for Jewish Research.

Established in 1930 after a schism within the Jewish socialist Workmen's Circle, the IWO's founding members came from the ranks of prominent leaders of the American communist movement. Selling health and burial insurance to workers of all races at the same rate, as opposed to for-profit corporate insurance companies, which charged different rates for workers of different races, the IWO quickly became the fastest growing fraternal order in the United States. Supporting the left wing of the New Deal, IWO leaders hoped that once workers came to see state-supported healthcare, unemployment insurance, and minimum wage as a right, they would work to put the Communist Party at the helm of a worker-led American revolution. By 1941, the IWO claimed a membership of over 150,000 members nationwide. IWO lodges organized foreign-language newspapers, mandolin orchestras, sports teams, May Day parade floats, theater troupes, mass picnics, and marching bands.

While about a quarter of IWO members were Jews, the IWO also included numerous other ethnic/linguistic sections. Large immigrant populations of Russians, Ukrainians, Hungarians, Poles, Slovaks, and Italians made up the majority of the non-Jewish membership, but the IWO also effectively established a foothold amongst almost every national minority group in the United States, from Arabs in Michigan, to Japanese in San Francisco, to Cape Verdians in Cape Cod. The IWO also began to organize black Americans. This proved a more difficult problem than organizing any other group, and caused considerable consternation and debate among IWO leaders. "Shouldn't blacks be organized within English-speaking lodges, on the principle of interracial unity?" some members asked. Others responded that, according to the Communist Party's "black belt" hypothesis, blacks constituted a unique minority group and should, therefore, be accorded the status of a national section. 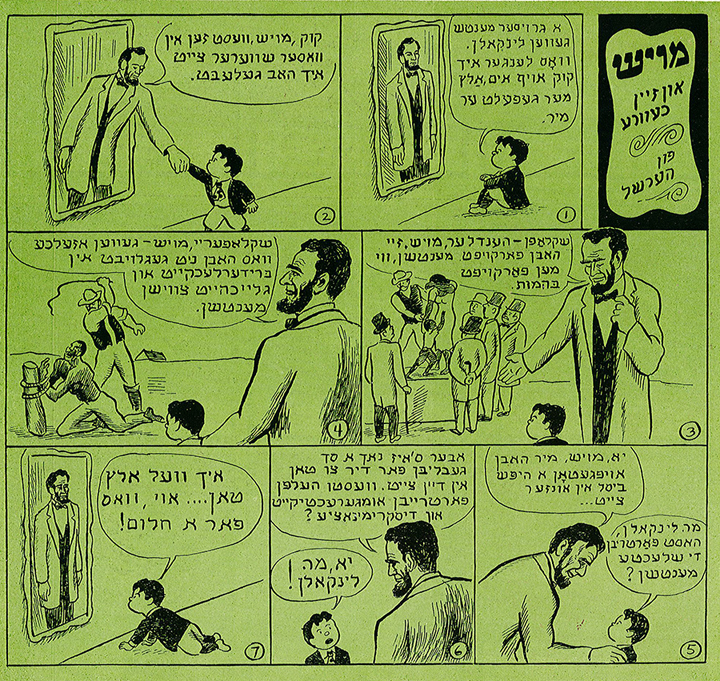 Reproduced from the October 1949 issue of Yungvarg, the IWO Yiddish children's magazine. Courtesy of YIVO Institute for Jewish Research.

In order to address the issue of black membership in the IWO, the IWO appointed the prominent black Harlem community leader, Reverend Moran Weston, as their Director of Negro Work. Weston worried that pageants, spectacles, and a cult of Negro celebrity would not generate urgently needed political changes for black Americans. In a 1941 newspaper article, Weston connected prejudice against blacks to the war in Europe, arguing that Jim Crow was a form of fascism. Alluding to the recently passed Smith Act, which expanded grounds for deportation of immigrants, Weston announced a new IWO campaign against the poll tax, declaring that the poll tax "engenders fascism in the South and undermines democracy in the North . . . ." Foreign-born Americans, now vulnerable to intimidation, raids, and arrests without cause, could particularly understand Jim Crow, Weston argued; it was no coincidence that a key proponent of poll taxes was Representative Smith of Virginia, sponsor of the Smith Act.

In the summer of 1944, the IWO convened a conference to discuss how best to organize blacks within the IWO. Responding to Reverend Weston's criticism that Negroes within the IWO felt kept apart from the rest of the IWO, the new strategy aimed to organize "general" lodges, not predominated by any ethnic or linguistic group, where Jews, Italians, Poles, white Protestants and others could "express solidarity with the Negro people," thus creating a "more advanced expression of inter-racial unity." While a number of "general" lodges were predominantly black, and others were predominantly white, by rule every lodge in the IWO had to be interracial. IWO leaders hoped to recruit seven thousand more black members by the end of 1945, the majority in New York, Chicago, and Detroit. These "concentrated" black lodges, IWO leaders stressed, should not be seen as a form of segregation, but as a result of focusing on the particular concerns of the Negro people, just as Jewish lodges mobilized around issues of unique concern to American Jews, like anti-Semitism and support for the State of Israel.

While pushing for more black lodges in predominantly black communities and for more interracial lodges in majority white communities, the IWO also continued to sponsor public celebrations of black culture as a method of connecting members in the larger struggle for political solidarity. In a memo announcing Negro History Week in 1945, the IWO encouraged lodge directors to "invite a prominent Negro trade unionist, clergyman, artist, or civic leader as honored guest and speaker." In response, Lodge 817, a Jewish lodge in Brooklyn, launched their first "Salute to Negro History Week," reaching out to members of the local Mt. Zion Baptist Church. So successful was this outreach, they reported, that their black neighbors "have joined the IWO in sufficient numbers" to form their own lodge (about fifty people). Still, white IWO leaders, while praising local efforts in observing Negro History Week, worried that these actions were superficial: "Inter-racial unity is not something to be worn like a Sunday suit of clothes—on certain special days of the year. By our daily deeds, we of the IWO labor to . . . attain full equality for all groups of the American people," one memo declared. Yet despite moderate growth in both black and interracial lodges, leaders worried that white chauvinism kept IWO groups focused on their own affairs, and not on interracial solidarity work.

By the fall of 1949, two nationally publicized incidents galvanized the IWO's Jewish section to convene a special meeting dedicated to solving the problem of "Negro-Jewish Relationships and Unity." In September, after an upstate New York outdoor concert featuring Paul Robeson, the audience faced a hostile, rock-throwing crowd, shouting racial slurs against Jews and blacks. Rumors abounded of crosses burning on the hillsides around the amphitheater. That November, a Jewish union leader and IWO member invited black colleagues to his home on Chicago's south side. White neighbors, worried that the family was planning to sell their house to blacks, instigated a weeklong "reign of terror." Crowds of up to ten thousand people gathered on the streets, yelling "dirty kikes," and "communists."

At the IWO gathering held in response to these sobering events, Abe Chapman, an editor of the Yiddish communist newspaper, the Morgn Frayhayt, argued that one real problem with Jim Crow fascism was that it meant that white supremacist ideologies had not yet been wiped out of the IWO itself. " . . . [r]acism is eating the heart of our Order," another member concurred. Another speaker argued that Jews had not yet done enough in the fight for equal housing: by fighting for Negro rights; he argued Jews could help eliminate anti-Semitism among blacks who were being exploited by Jewish landlords and merchants. Negroes, not Jews, stood as the "barometer of the state of our democracy," but the battle to end racism and anti-Semitism would have to be fought jointly in order to succeed. Abe Chapman concluded that it was the distinct responsibility of Jews within the IWO to make the "maximum contribution" to this struggle.

In February 1950, the IWO ultimately established the Douglass-Lincoln Society, the official Negro section, "giving leadership to the interracial work of the Order" while "serving the special needs of the Negro community." Heralding the opportunity for joint action, a Jewish Fraternalist columnist envisioned joint commemorations of the Warsaw Ghetto Uprising, and performances of the play Freedom Road. This optimism was short-lived.

Several months later, Abe Chapman disappeared. The phone rang repeatedly in his Queens apartment, the beds still made and the bookshelves still full. As the FBI closed in on Julius Rosenberg and the government prepared for a record-making prosecution of eleven communist leaders under the Smith Act, Chapman smuggled his family out of the country and began a new life in Czechoslovakia. Other leaders went underground as well, preserving a secret network of party leadership in the face of political decimation. At the same time, the IWO received an auditor's report concluding that it constituted a "hazard to the public," because of its communist affiliation. The report recommended liquidation. By 1953, the IWO's assets of over seven million dollars became the property of New York State, its 150,000 memberships were voided, and its officers were discharged from all official duties. Although many groups within the IWO reconstituted themselves as independent entities, none were interracial; the great experiment embodied in the "Douglass-Lincoln" title had come to an uncertain end. While many friendships remained, the project of political unity did not endure.

Jennifer Young is director of education at the YIVO Institute for Jewish Research, in New York. She is a doctoral candidate at New York University, completing a dissertation about Jewish Commu nists, race, and the politics of belonging. Her article, "Race, Culture, and the Creation of Yiddish Social Science: Max Weinreich's Trip to Tuskegee, 1932," recently appeared in Choosing Yiddish: New Frontiers of Language and Culture