Police and Communities: It's Complicated

In New York, some of the very former governors and mayors who gave the police hell to get raises, insisted on underpaying them, leaving them without contracts for years on end are today, once again, claiming to be their best defenders and crusaders. Why is that? 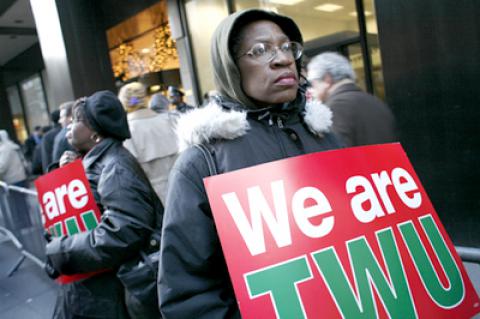 Serve the members or defend the interests of the rich and powerful in NY and satisfy the urges of the sickos and insecure bullies that are drawn to the police service to "put people in their place"?' That is the challenge facing the police unions and NY's PBA.

There is no doubt in my mind that, just as in every workplace, in every precinct crew room, every single cop knows who the sickos and bullies with their own personal agendas and insecurities are! Most times, they are the loudest and the brash -- out to prove something but too often exercising disproportionate influence, especially in the face of the silence of the majority of decent officers. A huge amount of damage is done when everything revolves around what these few want and need.

The historical role of the police with respect to workers, the poor, the underprivileged and the social movements that strive to better the positions of the above is undoubtedly the fundamental challenge for those in these services. But it is also true that, as the demographics of these services and the times itself have changed, other challenges have arisen requiring the leadership of these organizations to catch up. The old days of operating as a gang unto itself with its own internal code and all, are at odds with modern policing and the realities of many urban communities and with the mindsets and socializing that many of today's youth share.

I recall the days of Phil Caruso, who headed the PBA in NY in the 80s into the 90s. Many New Yorkers hoped that with a younger generation of leaders, the PBA was poised to move forward just as New York was. Make no mistake about it, the bottom line is that NY and America is in the midst of unstoppable change -- from the old to a new, more integrated, cosmopolitan society. Old standards must give way to new and better ones.

Much of what we are witnessing in NY and around the country that appears to be a resurgence of conservatism, right-wing and even racist mentalities are in fact desperate attempts to turn back time in the face of unstoppable and irreversible change. Which is why these attempts are ultimately destined to fail. Undoubtedly, there is a definite element within the police forces that share deep resentment about the changes taking place across America and want to see action taken to put people "in their place." But for the majority especially in the metropolitan police forces, it's tough and dangerous, but a job nonetheless. These officers should not help stand in the way of change, for the interests of many lie precisely with such changes.

New York's cops, and firefighters too, should take heed of what happened in America in the aftermath of the attacks and uprising in Wisconsin in the early months of 2011. In state house after state house, the ruling politicians moved to destroy workers' pensions. Invariably, these treacherous politicians cited the 20 year pensions of many firefighters and cops around the country as a principal justification for the need to strip all American workers of their pensions. Having worked to isolate them from the communities they serve as privileged and singing them praises as "the finest," "the bravest," "first responders," they switched up on cops and firefighters, declaring their pensions to be "unsustainable" and depicting them as undeserving recipients of welfare.

Just as more privileged "middle class" workers are receiving wake up calls, sometimes too late, police and fire unions around the country have found themselves, all of a sudden, among the ranks of victimized, vilified and unappreciated American worker! They too became fair game in the plunder of the American worker. It got real personal. Their credit as "privileged" got pulled real quick when in got in the way of making $$$. No longer special, they joined the protest movement outside the country's state houses, often with shocked looks on the faces! So, think long and hard!

The rich and powerful want to remove any and all obstacles to a feeding frenzy in an era in which they have made the most money since the very invention of money, and while the rate and degree of wealth and income inequality and have grown more rapidly that at any time in American history. To do this, they need all the forces that can stand in their way to be otherwise preoccupied, distracted and misdirected. They want the police to help them crush all resistance.

In New York, some of the very former governors and mayors who gave the police hell to get raises, insisted on underpaying them, leaving them without contracts for years on end are today, once again, claiming to be their best defenders and crusaders. Why is that? Could it be because, they see an opportunity to use the cops to discourage and put down a movement that could help change America and challenge their rape of the country's wealth? Cops and firefighters should think hard about where their better interest lies and who their true allies are. Tomorrow, the attempt to rob them of their pensions will return to the front burner. And when contract time comes they will be left out in the cold and standing alone. Who should their leaders serve? Their members best interests or those of the rich and powerful?

Its more than irony that both the leader of NY's PBA (Pat Lynch) and Eric Garner grew up as sons of NYC transit workers. Not only was Pat's father a lifelong transit worker but Pat himself worked briefly as a conductor. Eric Garner's mother is a retired train operator, his sister is an active duty bus operator as are cousins who serve as active transit workers (train operator). So not only is it literally true that "That could have been any of us," but the loyalty being exercised by the leadership of the PBA to the interests of the rich and powerful, is misguided and misplaced on this count too.

NYPD officers need to remember the faces of the family members, the eyes they stared into and the families and neighbors they went home to over the recent holidays when they choose sides tomorrow, and choose well.