Breakthrough in Greece? Austerity and solidarity

An editorial on the upcoming elections in Greece by the International Union of Food, Agricultural, Hotel, Restaurant, Catering, Tobacco and Allied Workers' Associations (IUF) The Greek elections offer a potential breakthrough, but to carry out their program a government of the Left will need massive understanding and support abroad. Unions should be in the forefront of building that support. 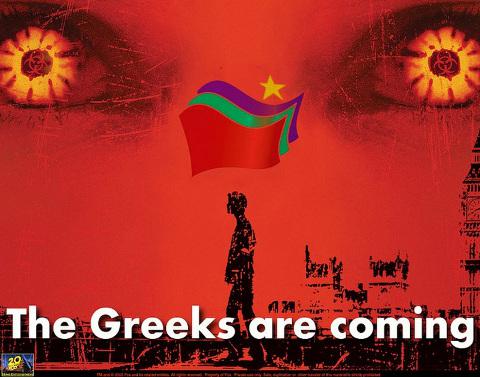 Greece will hold parliamentary elections on January 25 and Syriza, the left-wing party which has consistently called for debt restructuring and an end to austerity, is leading the polls. The IMF-European Commission-European Central Bank `Troika' are warning of the "threat" of Syriza coming to power and have forcefully indicated their support for Greece's ruling coalition by conditioning further financial support on the re-election of a pliable government. A Syriza victory indeed threatens the suffocating grip of the European and global austerity regime, and for that reason should be welcomed and actively supported.

For the last four years, a succession of aggressively harsh austerity programs have been imposed on the country by the IMF-EU-European Central Bank 'Troika' as a condition for supporting the banks and the treasury. At the Troika's insistence, the minimum wage was reduced by 22%, and 32% for workers under 25. Collective bargaining has been shredded, in blatant violation of international and EU law. Public services have been gutted and there are shortages even of basic medicines. Economic output has declined by 25% compared with pre-crisis levels, a level of destruction normally associated with war. A quarter of the workforce is jobless, with unemployment over 50% for young people. Malnutrition and infant mortality are on the rise.

Unsurprisingly, years of austerity have only worsened the country's capacity to service its debt; the public debt to GDP ratio is now an unmanageable 175% - up by over 34% since 2010. Greece simply has no resources to pay its sovereign debt, as even the IMF has reluctantly recognized. The Eurozone's slide into austerity-induced deflation aggravates the problem. Yet the Troika continues to inflict social and economic damage on a massive scale, and insists that the carnage continue.

All of this was predictable, and at every stage alternatives were feasible. Substantial debt restructuring coupled with increased public investment in the early phases of the crisis would have averted much of the pain, and not only in Greece. Cutbacks in public spending have never lifted a country out of recession.  'Internal devaluation' - lowering costs to make exports more competitive by reducing wages - was never a plausible solution to the Greek debt crisis; the country's negative trade balance has improved, but only because imports have been substantially reduced as a result of the radical decline in consumption.

If the Troika insists on more of the same, and not only in Greece, it is because they have a political project to fulfill: public services, union power, living standards and corporate taxes must be reduced, everywhere. Privatization will plug any fiscal holes.

Austerity is not the product of a deficient grasp of macroeconomics or a failure of 'social dialogue': it is a conscious blueprint for expanding corporate power. The program has been practiced and refined for decades in the developing world, everywhere with similarly disastrous results.

It came to the European Union for the first time with the imposition of extreme austerity in Estonia and Latvia following the 2008 financial meltdown. Despite decades of increasing volatility and cascading crises, a weakened labour movement was unprepared for the crisis and unequipped to articulate and impose a coherent Left response. Labour and social-democratic parties had long been complicit, even active participants in enforcing the new fiscal and political orthodoxy. There was little debate in Sweden when the Baltic economies were ravaged to bail out Swedish banks. Workers in those countries were left on their own, with no real support.

With little effective opposition, European austerity spread; first to Greece, then to Spain and Portugal, then further north. At the same time, austerity's forward march cleared the path for an increasingly aggressive, racist and xenophobic Right which offers simplistic answers to the crisis of the status quo.

Syriza emerged from a groundswell of popular revolt, and that revolt should be encouraged. But an election victory on January 25 will immediately set in motion widespread financial hostility. Even if the party succeeds in putting together a coalition government - and there will be massive pressure to block this - the difficulties will have only begun. Negotiating debt relief will be tough, and Greece could be left no choice but to quit the euro, triggering massive capital flight. Pressure will also fall immediately on Spain and Portugal, where elections are scheduled for later this year, and Spain's ascendant Podemos has, like Syriza, become a vehicle for hope.

The Greek elections offer a potential breakthrough, but to carry out their program a government of the Left will need massive understanding and support abroad. Unions should be in the forefront of building that support.

The International Union of Food, Agricultural, Hotel, Restaurant, Catering, Tobacco and Allied Workers' Associations (IUF) is an international federation of trade unions representing workers employed in agriculture and plantations the preparation and manufacture of food and beverages hotels, restaurants and catering services all stages of tobacco processing.

The IUF is currently composed of 395 trade unions in 125 countries representing a combined representational membership of over 12 million workers (including a financial membership of 2.6 million). It is based in Geneva, Switzerland.