“Solidarity Forever” echoes symbolically this Martin Luther King Jr. Day weekend. Dr. King’s last sermon was delivered in Memphis during the sanitation workers strike, a strike in which he acted not just as a civil rights leader but also a union leader. He even called for a general strike of black workers and students in Memphis. 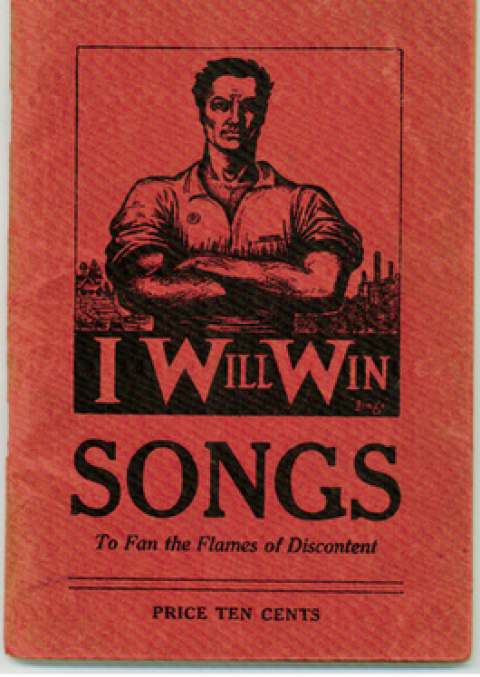 On a windblown, gray Chicago day 100 years ago, January 17, 1915, Ralph Chaplin left his home on the South Side for a raucous, poor person’s rally at the city’s famous women’s center, Hull House. He asked a visiting friend he’d met organizing coal miners with Mother Jones to listen to the lyrics of a new tune he had been working on:

The self-described Chicago “stiff” and “rebel editor” wanted to write a song that could be for workers what “John Brown’s Body” and “Battle Hymn of the Republic” were for abolitionists. In fact, he borrowed that very melody.

One hundred years later, despite the rise and precipitous fall of workers’ movements in the U.S., Chaplin’s song is a classic still widely sung with fists raised and demands for justice submitted. It’s an international and national anthem, the official song of the United Auto Workers; it was regularly belted out by “Occupy,” and it’s still sung every weekday by crowds from 20 to 100 protesters at the Wisconsin State Capitol rotunda.

In place of John Brown’s and the Battle Hymn’s antagonists, the slaveholders of “Solidarity Forever” are railroad barons and rich “parasites,” the takers of “untold millions that they never toiled to earn.”

It is we who plowed the prairies, built the cities where they trade
Dug the mines and built the workshops, endless miles of railway laid
Now we stand outcast and starving ’mid the wonders we have made...

But the song had a surprisingly “viral” ascent to popularity. In Chaplin’s own account, “Why I Wrote Solidarity Forever,” he tells how the song initially made its way to struggling workers as the nation’s first “lumberjack” anthem.

Chaplin’s troubadour and journalism work (he also designed the Industrial Workers of the World black cat logo) took him around the country. During strikes for safer conditions and the eight-hour day, his song was introduced to Washington state lumber workers.

“Fifty thousand striking Puget Sound loggers bellered it out to a world that didn’t care a hoot about the problems of vote-less and cruelly exploited ‘timber beasts,’” Chaplin wrote.

As the IWW’s radical antiwar and pro-wildcat-strike tactics got the union increasingly on government enemy lists, Chaplin ended up in Cook County Jail, then Leavenworth, on a conspiracy rap—while his song slowly made its way into the labor canon.

As workers won better terms and unions grew powerful, “Solidarity Forever” spread in an arc that would take it across the United States and into Canada, France, Latin America, and even Australia: one of the early IWW leaders fled there while under suspicion of communist activities. Australian Labor Party Prime Minister Bob Hawke was known to sing it from memory.

The French sing it as “Solidarite mes freres et mes soeurs.” A Spanish version is found in the renowned manual of American community sing-alongs, Rise Up Singing.

Smithsonian Folkways online has just published a story about the Wisconsin rebirth of song circles and new lyrics for Solidarity Forever, in its current issue. What makes the song durable, for all its weighty verse, is the controversy engendered by its history and lyrics.

Although the IWW had few members, its utopian vision of community resembled nothing so much as religious solidarity and a dream of justice.

When Chaplin faced trial in 1918 for his newspaper’s views and the union’s alleged antiwar activities, his attorney argued to Chicago’s famous Judge Kennesaw Mountain Landis: “The IWWs say there must be a fundamental change... the reorganization of industry, for public service, so that the purpose shall be that we will work to live and not merely live to work. Work for service rather than work for profit.” (Chaplin was convicted and served several years in prison until he was released after the war ended.)

In his late-life account of the song, Chaplin described a “life-or-death struggle between fiercely competitive ideological groups to see which of them would shape the future of the then-embryonic left-wing labor movement. It was a knockdown-drag-out fight with no holds barred, and every available weapon from gentle persuasion to brass knuckles was used to gain a fair or unfair advantage.”

Bureaucratic union leaders and concerned political moderates hated the song. When the first AFL-CIO president, conservative George Meany, was getting set to speak at a Washington rally of thousands of political leaders in the 1950s, he called out the singer Joe Glazer ahead of him when he learned the next song would be “Solidarity Forever.”

Meany declared, “We CAN’T have the song of one [big] union,” as the Industrial Workers of the World was known.

‘UP TOGETHER, OR DOWN TOGETHER’

But civil rights leaders gave it new life. “Solidarity Forever” echoes symbolically this Martin Luther King Jr. Day weekend. Dr. King’s last sermon was delivered in Memphis during the sanitation workers strike, a strike in which he acted not just as a civil rights leader but also a union leader. He even called for a general strike of black workers and students in Memphis.

At the end of his life, King’s agenda included expanding civil rights to the right of all workers to bargain collectively. He was a sworn opponent of “right-to-work” legislation that diluted worker voices.

Dr. King’s last public words mingle with the message of “Solidarity Forever.” “Nothing would be more tragic than to stop at this point in Memphis. ... You may not be on strike. But either we go up together, or we go down together.”

And he ended with words from the abolitionist song “Battle Hymn of the Republic,” the one that Ralph Chaplin borrowed the melody and the anti-slavery theme from: “I’m not afraid of any man. Mine eyes have seen the coming of the glory...”

Jonathan Rosenblum, an attorney and writer (National Writers Union Local 1981), has also written for the Center for Media and Democracy. He wrote Copper Crucible: How the Arizona Miners' Strike of 1983 Recast Labor-Management Relations in America.