Airline food service workers on January 29 launched a nationwide campaign for affordable health care by holding demonstrations and other actions in cities across the US. 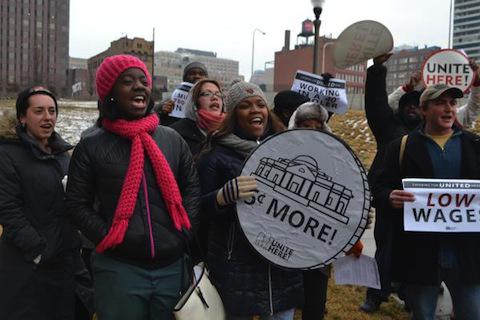 The workers are asking airlines to earmark from each ticket sold a nickel, which would be used to provide affordable health care for food service and other workers, who work for the airlines' subcontractors.

“A nickel more per ticket won’t affect the airlines’ pockets, but it would mean a huge relief for us,” said Diego Ortiz, who drives a food service truck at Chicago’s O’Hare Airport.

Ortiz services plane for American, Delta, and United, the three largest air carriers in the US.

More than 1,200 airline food service workers participated in “nickel a ticket” actions across the US.

In Atlanta, Chicago, and Dallas, workers delivered a letter to the big three’s CEOs.

“We proudly cater food for the hundreds of millions of passengers who fly your airlines,” reads the letter. “We work very hard, but our families and your business are at risk.Quality healthcare is just a pie in the sky for us airline food workers. Most of us make less than $20,000 a year. We can’t afford the health insurance offered to us by airline food companies as it costs anywhere between $100 and $500 a month to insure ourselves and our families!”

Natasha Hill, a Chicago airline food service worker, participated in one of the demonstrations.

She pays the high premium for her health insurance because she has two children who need coverage. The high price strains her budget and doesn’t provide adequate coverage.

“I pay more than $400 each month, almost an entire week’s paycheck, for insurance,” said Hill. “It’s expensive and on top of that I have to pay $10,000 out of pocket before my family even starts seeing any benefits. But I do it because my two sons need health insurance.”

If Hill didn’t pay for the expensive health insurance provided by her employer, she would have to pay the income tax fine that the Affordable Care Act requires of those who do not purchase health insurance.

That fine could affect as many as 25 percent of the 40,000 workers who work for airline food service contractors throughout the US.

UNITE HERE, the union coordinating the January 29 action, surveyed workers in the airline food service industry. Of those surveyed, one-quarter did not have health insurance because they couldn’t afford it.

Low wages in the airline food service industry make health insurance unaffordable or a burden on those who pay the premiums.

According to UNITE HERE, 40 percent of airline food service workers make less than $10.10 an hour.

These low wage workers provide services to airlines that are essential the airlines’ bottom line.

Diverting a nickel from each ticket to make health care affordable to these essential workers would hardly impact the companies’ earnings.

Some of these profits are made possible by the generous support that the airlines receive from the public in the form of tax incentives and other subsidies.

One way to hold down labor costs is to provide high cost health insurance.

The workers’ letter to the CEOs points out that unaffordable health care is not good for business.

“Neither you nor we can afford for airline food workers to be unhealthy,” reads the letter. “No one wins when we, the tens of thousands of workers who cater your aircraft, come to work sick. We implore you to support the affordable and quality healthcare that we and our families need. We deserve it.”