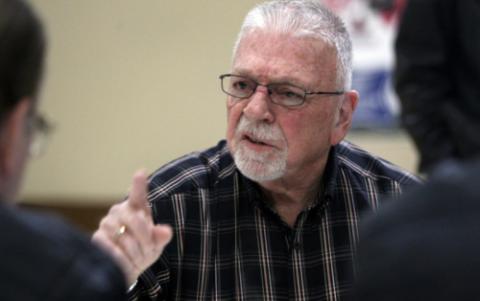 Bill Hendershot and his wife live on his union pension and Social Security. Hendershot, a retired Consolidated Freightways long-distance truck driver, gets around now in a 12-year-old Toyota Corolla. The couple still pay a mortgage on their home in Canal Fulton. And he’s among a huge group of union retirees nationwide who could see their monthly private pension payments cut as much as 60 percent under a national reform measure signed into law in December by President Barack Obama.

“I could lose two-thirds of my pension,” Hendershot said. “You ask, how could I live? You talk about drastic reductions. … We don’t live big now.”

The new law, the Multiemployer Pension Reform Act of 2014, was a bipartisan effort backed by some unions. It is intended to save severely underfunded, private-sector, multiemployer pensions in which different companies pay money into one pension fund. For numerous reasons, including bankrupt employers and increasing numbers of retirees, multiemployer funds make up a large percentage of the nation’s least financially stable pensions.

The act also is aimed at reducing the strain on the Pension Benefit Guaranty Corp., or PBGC, the privately funded federal backstop for pension funds. But under the new law, keeping the financially troubled multiemployer funds solvent so they at least continue to pay out some money could mean dramatically lower benefit checks for a million or more retirees across the nation, experts say. That has Hendershot, who retired in 2002 when Consolidated Freightways went out of business, and others worried about their own well-being. Hendershot’s Teamsters pension plan is among the most sickly. He and others suspect a lot of people don’t know about the new law and will be blindsided if their pensions are cut.

Under the law, retirees ages 80 and older would not get their benefits cut. Retirees 75 and older could get smaller cuts. Retirees younger than 75 could get their pensions reduced by the maximum amount, subject to a vote by active and retired workers. Cuts also need plan trustee approval.

“It’s a struggle to get by as it is,” said Joe Mardula, 62, an Akron resident and another former Consolidated Freightways worker. He said someone like him who gets a $3,000-a-month pension could see it cut to as low as $1,200. “My [ex-wife] and I would have to split that, too,” Mardula said. “How are you going to live on that between two people?”

As many as 150 pension plans nationally may be impacted by the new act, Friedman said. The U.S. Department of Labor keeps a list of “critical status” multiemployer pension plans. The Pension Rights Center created a Multiemployer Retiree Cutback Calculator for its website, www.pensionrights.org, that allows people to get an idea of how much their pension could be cut under the law.

As many as “1.5 million people are affected by the new law, and a small percent know it has been passed,” Friedman said. The Pension Rights Center is committed to appealing the cutback provisions of the bill, she said. “We’re committed to organizing retirees around the country,” she said. She noted that union workers gave up wages so companies would put money into pension plans.

“There is a question about whether there is a social contract anymore,” Friedman said. “You are cutting something that was inviolable. Can anyone trust anything? … The highest principle is to keep promises to people.”

Mike Walden, a retired Roadway union worker who lives in Cuyahoga Falls, heads the Northeast Ohio Committee to Protect Pensions. The group, made up of retired Teamsters in the Akron area, organized to oppose the passage of the Multiemployer Pension Reform Act as it worked its way through Congress.

“We’d been fighting this for a year,” he said. Now members are working to get at least part of the act repealed, Walden said. He has been traveling around the nation to speak to Teamster retirees about the act. When he speaks to groups, Walden said he tells them, “It’s about your pension, your lifestyle, your future.”

Walden said one goal is to have a rally in Washington later this year. The ultimate aim is to either have the act repealed followed by new hearings to draft revised legislation, or to get part of the act repealed that cuts retiree pensions, Walden said. There are other solutions out there that can shore up failing pension plans before taking away retiree money, he said. “All of this is falling on the shoulders of retirees,” he said. “We just want a fair shake.”

Walden said it could take a year to figure out the complexities of the legislation and longer than that before plans try to cut retiree benefits. He expects there will be significant challenges to the law. Many workers affected Thomas Morneweck, executive secretary-treasurer of the Tri-County Labor Council in Akron, noted that the law affects more than Teamsters. Machinists, electricians and others face possible cuts in their multiemployer plans as do the Teamsters, he said. “Allowing cuts to pensions would be unprecedented,” he said. “We get the big picture” on the financial state of pensions, Morneweck said. “The cut is what’s devastating to people living on a fixed income. … You don’t want to start down that road. It’s a slippery slope. The cuts keep coming. There’s no stopping them.”

Bill Foshee, 73, says he’s tried to keep busy in the 15 years since he retired from Consolidated Freightways. The Teamster retiree volunteers and also works part time while drawing a union pension. “The whole concept is, we worked hard for this,” he said of the pension. Foshee said he is among the union retirees keeping a close eye on multiemployer pension reform. “We really want people around here to know we’re watching it,” he said.

“I’m at a point now where everything has leveled off and I want to keep it that way, my bills and stuff. … If they don’t cut us too much, I’ll be all right.” Tony Popio, 81, a retired Teamster who lives in Barberton, said he disagreed with the new law. “We’re pawns to make money for somebody else,” he said.

Jim Mackinnon can be reached at 330-996-3544 or jmackinnon@thebeaconjournal.com.