The new Detroit renaissance does not address why the city declined in the first place. It does little to address poverty, unemployment and access to resources for the vast majority of the city’s residents. What’s worse, the gentrification of downtown Detroit contributes to greater inequality and polarisation, which are growing challenges for cities around the world. 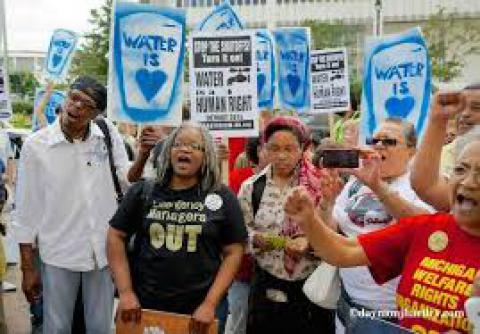 For the past two years, I have taken postgraduate students in urban geography to Detroit, where a prosperous downtown is rising. The city’s transformation is being celebrated and seen as potential model for other places.

But George Galster, professor of urban studies at Detroit’s Wayne State University told my students to imagine the city as a bathtub. The new investments and activities are like water pouring into the tub. But nothing has been done to plug the giant hole at the bottom of the tub.

This new renaissance does not address why Detroit declined in the first place. It does little to address poverty, unemployment and access to resources for the vast majority of the city’s residents. What’s worse, the gentrification of downtown Detroit contributes to greater inequality and polarisation, which are growing challenges for cities around the world.

What has created this hole at the bottom of the bathtub?

Between 2000 and 2010, 25% of the population left the city – that’s an average of 2,000 people a month. Half of its 5-9 year olds departed during this time (pdf), their parents leaving in search of better schools and opportunities in the suburbs. Today, Motor City boasts just two vehicle assembly plants, down from more than two dozen at its peak. Neighbourhoods which used to house factory workers look like rural prairie. Adjusted for inflation, city tax revenue fell from $2bn (£1.3bn) to $1.1bn between 1960 and 2012. Retail is largely absent from Detroit; even buying basics such as socks can require a trip to a suburban mall.

This exodus of jobs has led to a mismatch of people and employment across the region. Around 60% of Detroiters who have a job work in the suburbs. Conversely, 70% of the jobs located in the city of Detroit go to people who live in the suburbs. Chronic unemployment and poverty remain one of the city’s biggest challenges.

The current renaissance does not address these problems. Most investment takes place in the Greater Downtown, which includes the city’s historic core and neighbourhoods such as Midtown and Corktown, which comprise 5% of the city’s area and population. Here, once-abandoned offices are being bought up and renovated by enthusiastic entrepreneurs, a new modern tram line is being built along Woodward Avenue and it can actually be difficult to find an apartment as vacancy rates are very low.

The boundaries between revival and decay can be very severe. Travel three minutes by car from Midtown’s Wayne State University and you are surrounded by streets overgrown by vegetation and burned out factories. The gentrified Corktown neighbourhood, centred along Michigan Avenue, abruptly ends one block west of its famous Slows BBQ restaurant.

Greater Downtown’s current revival will mean that this 5% of the city will pull further and further ahead of the other 95%. Those able to afford to live there enjoy great restaurants and bars, well-paid employment, safe and attractive neighbourhoods and reliable public transit. The problem is most Detroiters cannot afford to live here. And like everything else in Southeast Michigan, race is one of the dominant factors. In a city that is 85% African American, Greater Downtown is becoming increasingly white.

There are also growing divides between public and private services. While most Detroiters wait hours for the police to arrive, private security forces patrol Downtown and around Wayne State University. When problems arise in adjacent neighbourhoods, you don’t call 911, you call campus police, who respond in minutes, rather than hours. Detroit has some of the worst municipal services in the country so the gentrifying areas increasingly turn to their own private amenities to compensate.

New public transport investments are increasingly focusing on the Detroit’s core. There is a sad irony that in a city where about a quarter of residents are too poor to own a car, the new tram line will serve office workers, gentrifiers and students in Greater Downtown. It will do nothing for the low-income families that need to travel 15km by bus to access a basic grocery store. So while there is indeed a “renaissance” taking place in Detroit, most city residents are detached from it.

This inequality is part and parcel of contemporary cities. It is not confined to cities struggling with the legacy of de-industrialisation; polarisation is also one of the biggest challenges facing prosperous cities such as London, New York or Paris. But inequality doesn’t just happen. It is the product of economic, business and political decisions of what, how and where to invest and distribute money and resources.

The current revival of Detroit – and cities like it, such as Glasgow or Newcastle, needs to be seen in this context. Detroit’s safer, more attractive downtown contributes to growing inequality across the city. It does little to address the poverty, unemployment, poor health and abandonment in 95% of the city. It promotes fragmentation and individualisation: why should downtown residents fight for better municipal services when they can buy their own private ones?

Politicians and planners love a good success story. But cities are rarely so simple. And celebrating Detroit’s current renaissance would be the wrong lesson to draw from this great American city.

Brian Doucet is an assistant professor of urban geography at Utrecht University in the Netherlands.